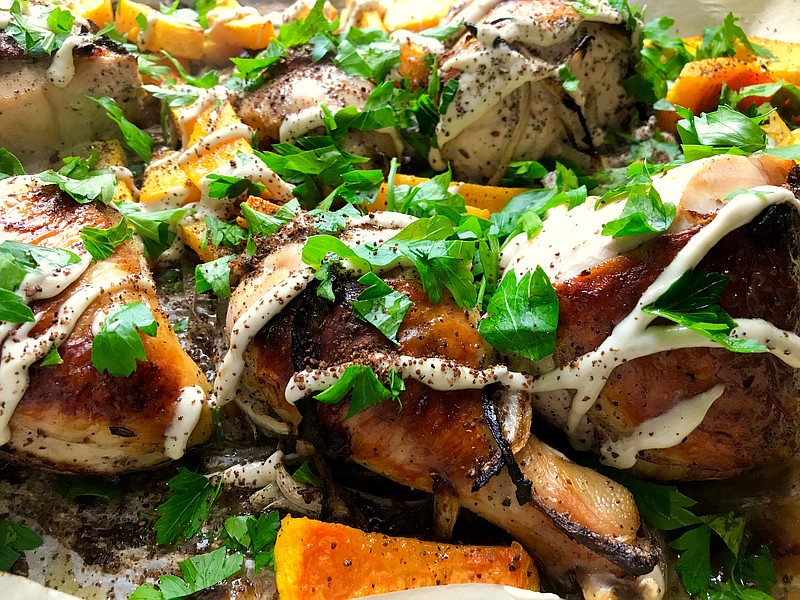 For years I avoided recipes that called for sumac, or relied on poor facsimiles using lemon juice.

Every time I saw sumac in an ingredients list I would immediately begin to itch. I couldn't help but think of poison sumac and its itchy associates, poison ivy and poison oak.

But my qualms were needless. And so are my fears of poison sumac — it doesn't grow in Arkansas, according to the Arkansas Native Plant Society; and its berries are white.

Today sumac is one of my favorite spices. I use it almost as much as cumin and dried chiles. It adds a vibrant, tart, citrusy punch to whatever you sprinkle it on. Look for it at Middle Eastern grocers and some specialty stores.

There are about 35 varieties of sumac, all members of the Anacardiaceae family (cashews, mangoes and pistachios are also members of this family). The sumac found in spice jars is most often Rhus coriaria, or Sicilian sumac.

Culinary sumac, used widely in Middle Eastern and Mediterranean cuisine, is a shrub that produces dark red berries. These berries are harvested, dried and ground into flakes or powder.

The shrubs grow in clusters and each fall put on a colorful show as their foliage turns from green to orange and red.

Its berries are sometimes used to make tea, according to the University of Arkansas Cooperative Extension Service.

Another edible sumac found in Arkansas is fragrant sumac (Rhus aromatica), which, according to the plant society looks remarkably similar to poison oak and ivy. Remember the old adage: Leaves of three, let it be — because poison oak and ivy, after all, also produce red berries.

In this sheet pan recipe the spice is used to flavor chicken and butternut squash.

1 small butternut squash, peeled, seeded, and cut into chunks or wedges no thicker than 1 inch and no longer than 2 inches

In a large bowl, combine the chicken, sliced onion, smashed garlic, 1 teaspoon of the sumac, the cumin, red pepper flakes, 2 tablespoons of the oil, 1 teaspoon of the salt, ¼ teaspoon of the black pepper, lemon zest and half of the lemon juice and toss. Cover with plastic (or transfer to an airtight plastic bag) and chill for at least 12 hours.

While the oven heats, remove the chicken from the fridge and let it come to room temperature.

Toss the butternut squash chunks with the remaining 2 tablespoons olive oil, ½ teaspoon salt and ¼ teaspoon black pepper and spread onto a sheet pan in a single layer. Arrange the chicken, skin-side up, on a separate sheet pan and scatter the onions around and in between.

Bake both pans for 20 minutes and then transfer the squash to the pan with the chicken and continue roasting until chicken skin is golden brown and the meat reaches an internal temperature of 165 degrees, 20 to 40 minutes more — actual cooking time will vary depending on the thickness of the chicken pieces.

Good on Everything Tahini-Yogurt Sauce

¼ teaspoon salt, plus more if needed

Pinch of black pepper, or to taste

In a small bowl, combine the tahini, lemon zest, lemon juice, yogurt, garlic, salt and pepper. Taste for seasoning and add more salt or pepper. Whisk in a tablespoon of olive oil. If desired, thin it out with a little water or just more olive oil. The sauce can be kept, refrigerated, for up to one week.