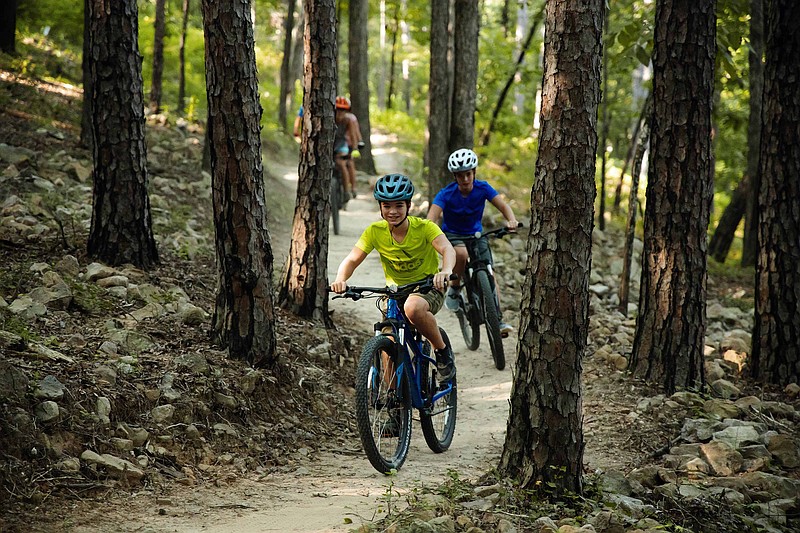 Miles and Sullivan Dockery crank it out on Coachwhip, part of the new Pinnacle Mountain Monument Trail. (Special to the Democrat-Gazette/Jacob Stanford)

For all the mountain bike riders in the Little Rock area who have been drooling on the chin guard of their full-face helmet over the awesome trails being built in Northwest Arkansas, wondering when some of that trail love was going to trickle down to the Central Arkansas, your wait is over.

These professionally constructed trails are the product of the Arkansas Parks & Recreation Foundation's Monument Trails program. The foundation is a 501(c)(3) nonprofit with a mission to use private resources to support, protect and add value to locations that provide exceptional recreation experience across the state.

Although Monument Trails are designed with an emphasis on cycling, they are also open to hikers and runners.

"The Monument Trails are intended to introduce a variety of visitors to our state parks' natural resources," Spann says. "The new trails at Pinnacle Mountain State Park will provide a vehicle for people to enjoy some of the Little Rock area's most beautiful natural resources."

The trails will expose hikers and bikers to the diverse ecosystems of forest, wetlands and open prairie that have attracted visitors to the area for centuries. These bike trails will complement other activities the park offers, such as kayaking, rock climbing, horseback riding and hiking.

Spann believes the Pinnacle Mountain trail system will also provide an economic boost to the central region. The combined attraction of the new Pinnacle Mountain trail system, plus the Mount Nebo Monument Trail in Dardanelle and the recently constructed North Woods Trail in Hot Springs will draw cyclists from Texas, Oklahoma and Louisiana, generating revenue for those businesses serving the needs of these new visitors.

A 2017 BBC Research & Consulting study to assess the economic and health benefits bicycling has provided for the Northwest Arkansas region estimated $137 million in benefits to the economy annually. Spann sees no reason to believe Central Arkansas will not experience similar benefits.

I was fortunate to have Joe Jacobs, Arkansas State Parks marketing and revenue manager, as my guide through the new trail system.

When the foundation began work on the Monument Trails, Jacobs was a perfect fit for representing the state parks interest. His shove-meets-dirt experience in trail building includes building the first mountain bike trails at Pinnacle. As a volunteer, Jacobs led the design and construction of the original Jackfork mountain bike trail, completed in 2010, and the bunny trail for new riders and children, Rabbit Ridge.

There are three trailhead parking lots for accessing the trail system. Jacobs and I began our tour at the Visitor Center parking lot.

Immediately upon entering the "new" Jackfork Trail, I was reminded of the sweet, trademark, well groomed flow trails that Rogue Trails is known for. If you enjoy riding the trails Rogue built at Hobbs State Park's Monument Trail, add Jackfork to the top of your must-ride-list.

At more than 4 miles, this is the longest link in the new system and preserves the name of the original Jackfork.

Less than two miles into this flowfest of a trail, on a connecting side loop called Dynamite, Rogue demonstrated its talent for creating excitement.

This approximately 2-mile loop routes bikers or hikers through a former rock quarry. More than 75,000 tons of rock were taken from Pinnacle Mountain to build the Lake Maumelle dam in 1956, with the majority coming from the location of Dynamite Trail.

Immediately into the spur trail, stacks of large boulders create two consecutive narrow-spine pathways for riders to pick their route up and over. For the techie with little exposure, this feature will be great for working on balance and route-selecting skill sets. There is also a ride-around, for those who prefer to avoid boulders rather than ride over them.

The trail passes interesting boulder fields and craters, remnants from the quarry era. Also, scenic rock formations and steep bluffs border the trail. Many of these bluffs offer extensive views of the Arkansas and Maumelle rivers flowing past the base of the mountain.

After the loop rejoins Jackfork, the trail continues around the mountain to an intersection hub where riders have an option of four routes, three of which reconnect at the bottom of the mountain.

Jackfork is the least challenging of these routes, circumventing the descent by gently meandering its way around the hillside. Turkey Tracks and Twistflower take a more direct route down the mountain. The remaining option is Upheaval, which provides a relatively easy return ride up the mountain to the Visitor Center parking.

Leaving Jackfork, riders begin their Jagged Axe experience. Alex Scott and wife Kelsey are co-owners of the trail design company based in Eureka Springs. They began the business in 2018 with the construction of The Great Passion Play trail system. Jagged Axe is known for its fun singletrack.

They honored the state park's request for retaining some of the flavor of the original trails at Pinnacle, and so riders will observe a different feel on these trails. The trails have an intentional "old school" design.

"Bringing in new trail builders allows bikers/hikers to experience different types of trails," Jacobs explained. "Crews have their own style that they bring to the project. Variety in trail design and construction is a great learning experience for riders."

Neither downhill option from this hub includes anything crazy or super technical, and they offer ride-arounds for any purpose-built structure.

Of the two downhill runs, Turkey Tracks includes more constructed features. It also overlaps and preserves a popular section of the original Jackfork trail. Riders will remember it as "the sharp turn at the rock." Jagged Axe incorporated this natural resource into a fun bike feature by building rideable paths up one side of the rock and an exit down the opposite.

All three routes join what is known as the NICA Loop. NICA is the National Interscholastic Cycling Association. It was organized in 2015 to provide a fun, safe and high-quality mountain biking program for students in grades six to 12.

At more than two miles, Coachwhip Trail makes up the majority of the NICA Loop, with a segment of The Stick Trail connecting its two open ends. This entire loop is rated "beginner" to accommodate the young NICA riders. The loop circles the base of Middle Mountain with wider tread and minimal grades. However, there are several more technical trails within Coachwhip, offering something for everyone to enjoy on the Middle Mountain trails.

Jacobs prefers riding the NICA Loop counterclockwise, so we turned right to continue up The Stick. The name for this trail is another carryover from the original bike trail, which had formed a lollipop shape, with The Stick being the handle.

To start your ride on Coachwhip, there is trailhead parking at the road crossing. Jacobs said there are plans for enlarging the two trailhead parking lots on Visitor Center Road to accommodate 50 to 60 vehicles each for the anticipated increase of visitors.

Shortly after entering Coachwhip, we left the NICA Loop to begin climbing Centipede Trail. This mellow 3% grade is the sole route to the top of Middle Mountain.

Topping out on Middle Mountain there is a second intersection hub. Currently two downhill runs branch off there, but the plan is to add two more later this year.

Armadillo Run was another trail designed to retain some of the old school flavor of the original trails, as Jacobs describes it, "rake and ride."

Middle Mountain Run includes sweeping, high bank dirt berms and pumpy rollovers for a fast, gravity-fed flow ride down the mountainside. Although this run is rated green, with speed it can become technical, guaranteeing enjoyment for all skill levels.

At the bottom of Middle Run there are an assortment of constructed features that are perfect for NICA riders to hone their mountain biking skill sets. With rock features, a log rollover and a "fat" skinny log, it is a perfect area for the do-overs needed to create muscle memory for safely handling features on the trails.

Plans are to add four miles of trails during coming months. This will include two trails with black ratings and another rated blue. Plans also include hiker-only paths.

In a notable bonus that Jacobs says provides instant credibility in the mountain biking world, one of these new trails will be designed and constructed by Belgian trail racer/builder Nico Vink. The all-round bike skills that made him a standout in racing have made his name synonymous with creative designs and builds.

Suzanne Grobmyer, Arkansas Parks and Recreation Foundation executive director, hints that there are discussions for an infusion of creativity so original that, if approved, it will set the Pinnacle Mountain Monument Trails apart from all other trails in the Natural State. Stay tuned for details.

The re-do of Devils Den State Park's Fossil Flats Trail was opened for business in mid-September. Rogue Trails added enhancements while preserving the flavor Assistant Superintendent Tim Scott and park staff built into the trail in the early '90s. On my maiden ride following the modifications I was excited to see "Gravity Cavity" is back.

Discussions are also in the works for adding more new trails to the Devils Den network.

The bike/hike/paddle campsites at Hobbs State Park's Monument Trail are almost completed. In typical foundation style, the campsites are not just a place to sleep, they are works of art.