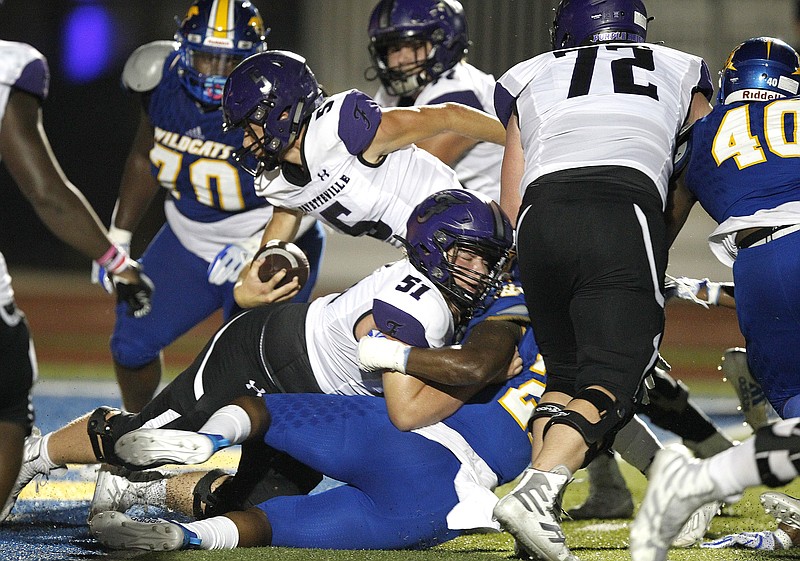 Fayetteville quarterback Bladen Fike (5) sneaks into the end zone for a touchdown during the fourth quarter of North Little Rock's win Sept. 11 at North Little Rock High School. The Fayetteville Board of Health on Wednesday recommended the high school host a mass testing event after the School District reported "several" football players may have had close contact with covid-19. (File photo/Arkansas Democrat-Gazette/Thomas Metthe)

FAYETTEVILLE -- The city's Board of Health hopes to set up a successful mass testing event at Fayetteville High School after few students took advantage of a free mobile testing event held this week on campus.

Friday's high school football game between Fayetteville and West High School was canceled this week because of possible exposure to the coronavirus. Fayetteville School District on Sept. 17 announced "several" football players had to quarantine because of potential close contact with covid-19.

A mobile testing crew was set up at the high school Tuesday and Wednesday for athletes and members of the high school band, said Board Member Gary Berner with Community Clinic. Letters went out to parents informing them of the testing availability, and students had to get parental permission, he said.

The clinic expected to do about 185 polymerase chain reaction tests over two days, Berner said. About eight tests were done, he said.

"I saw an athlete on the football team this morning who was not aware of this possibility at all," Berner told the board Wednesday. "Our role was to be there with as many tests possible and to screen anybody who showed up."

Berner said he was unsure why so few students elected to get a test. The board subsequently decided to invite School District officials to its next meeting, held online via Zoom, to organize a more robust testing event.

The School District's online dashboard listed 16 active covid-19 cases among students, with 14 recovered, as of Wednesday. The number of students unable to return to school because of quarantine or isolation was 71.

Board Chairman Hershey Garner with Highlands Oncology said the school should test at least a couple hundred students to get ahead of a potential surge in cases.

"I don't know how we get any meaningful data about the schools if essentially we're only screening symptomatic people," he said.

The polymerase chain reaction, or PCR, tests can detect a covid-19 case even if the person shows no symptoms. The quicker antigen test is meant for people who show symptoms. PCR tests can take up to a few days to get results back, while antigen test results can take minutes or hours.

Also Wednesday, Huda Sharaf with the Pat Walker Health Center at the University of Arkansas discussed peer pressure about testing among college students. She said she's heard stories of roommates getting angry if someone they live with tests positive, forcing others to go into quarantine for two weeks.

Sharaf said she suspected those instances happen a minority of the time, but the university is trying to get the message out about getting tested and answering the phone if a contact tracer calls.

The campus has testing available and is prepared to handle an increased in tests after the first Razorback home football game of the season Saturday, Sharaf said. Attendance is limited to about 16,500.

In other business, Marti Sharkey, the city's public health officer, said she ordered about 1,000 rapid antigen tests to dole out to local clinics. She could potentially order up to 8,000.

So far, clinics associated with Medical Associates of Northwest Arkansas are set to receive the tests, Sharkey said.

Fayetteville Board of Health