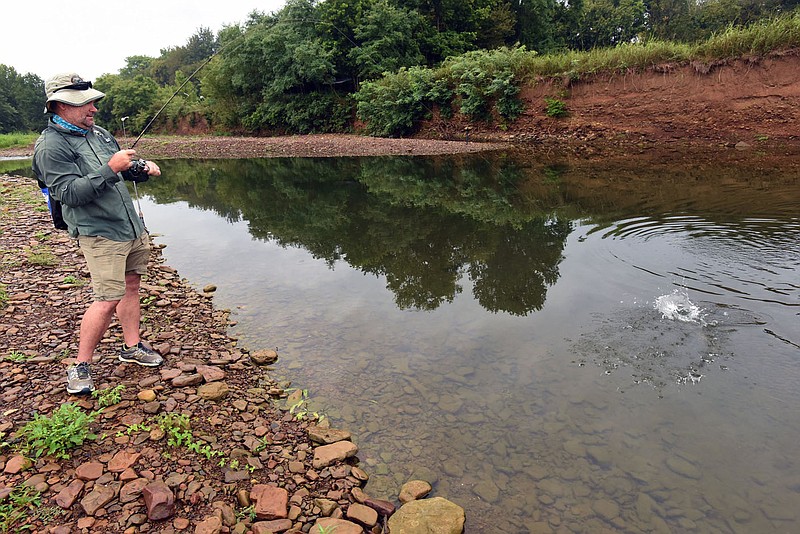 Jon Stein, Northwest Arkansas fisheries supervisor with the Arkansas Game and Fish Commission, catches a smallmouth bass in August from the West Fork of the White River. His fishing day was part of an effort to gauge the number and size of fish in the stream. Game and Fish uses electrofishing in their stream studies, but sometimes sampling a stream with rod and reel provides a more accurate picture, Stein said. (NWA Democrat-Gazette/Flip Putthoff)

Fishing was good for two anglers reeling in the occasional smallmouth bass from the West Fork of the White River. The future of fishing, and the overall health of the stream, is on the road to improvement thanks to habitat projects along its banks.

The two anglers catching smallmouths on a recent rainy morning were Jon Stein and Jordan Lindaman, both with the Arkansas Game and Fish Commission. Their rod-and-reel research helped determine the quality of the fishery along a mile of the stream. Stein is district fisheries supervisor with Game and Fish. Lindaman is a fisheries technician.

A project to repair eroding banks along this stretch of river has started, with Stein and Lindaman researching the fishery. When the project is finished months from now, they’ll study the fish population again and note any changes.

Severely eroded banks will be reworked and stabilized with boulders and the rootwads and trunks of large trees. The work is under the supervision of the area Watershed Conservation Resource Center. The project is similar to one completed in 2014 along the stream near the Fayetteville Executive Airport.

Sandi Formica, executive director of the center, showed the completed project to visitors in August. What were once sheer cliffs of dirt several feet tall are now gently sloping banks covered with vegetation that filter runoff and keep the shoreline from washing away during floods. Boulders and rootwads are seen in the project area.

Over time, the section of stream that Stein and Lindaman fished will be transformed in a similar way. Projects like this prevent tons of sediment from washing into the stream during floods. Sediment is a major cause of pollution on Ozark streams.

A first step on this mile of the West Fork is the fishery study. Game and Fish did an electrofishing study along this mile of stream. Now Stein and Lindaman were on rod and reel research.

“Rod and reel is better in some places,” Stein said. Sometimes more fish are caught, measured and released this way than with electricity.

Fish may swim away and hide during electrofishing on rocky, rugged streams like the West Fork of the White, Stein explained.

“And you can see how difficult it is to access this stream with our equipment.

Smallmouth bass are a prized fish for anglers. They’re hard fighters and a beautiful fish to behold. Slow growth is another trait, Stein said.

Smallmouth bass may grow faster in Beaver Lake than in streams, he added. An 18-inch smallmouth at Beaver Lake may be 6 years old, not 10.

Lake smallmouths don’t have to deal with floods and drought like stream fish. There’s also more forage in the lake, Stein said.

“The river here is incredibly wide,” he noted. Years ago, it was likely more narrow. Floods eat away at the bank.

“It’s just blowing out this bank,” Stein said. “On a healthy stream during a flood, you want the water to get out of the stream corridor and up into the flood plain.” When it doesn’t, it can erode the banks. The river gets wider and more dirt washes into the water.

All kinds of planning goes into these habitat projects before the first shovel of dirt is moved, said Formica, with the Watershed Resource Conservation Center. Designs are drawn, environmental studies conducted, cooperation from landowners obtained and more.

“When people see construction start, they think it’s the start of the project when actually it’s near the end,” she said.

Cost of this newest work could be around $1 million, but the exact price isn’t known yet. Grants and other funding pays for the projects, Formica said.

The Watershed Conservation Resource Center is a nonprofit organization that strives to protect, conserve and restore natural resources by utilizing the watershed approach, environmental outreach and providing planning and technical assistance to landowners, communities and government.