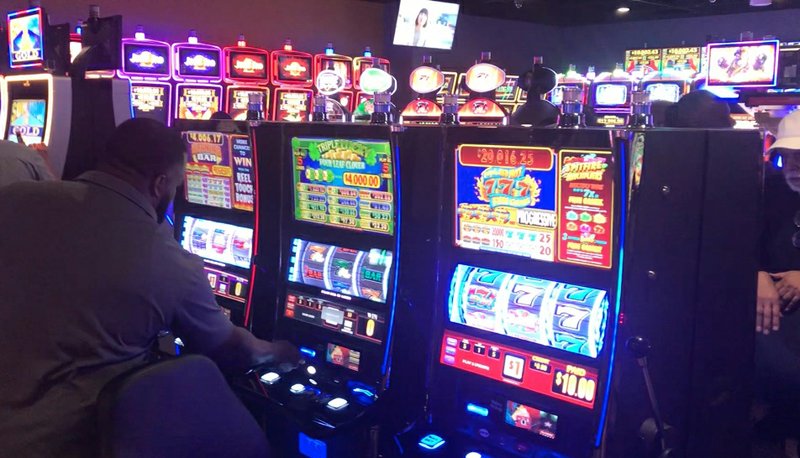 Slot machines are shown at Saracen Casino Annex in Pine Bluff in this 2029 screenshot from video.

When Saracen Casino Resort opens its gaming floor next month, smokers, because of coronavirus restrictions that require masks to be worn in public places, will be obliged to go outside the building to light up, just as is currently required at Saracen Casino Annex.

Five national health organizations -- the American Cancer Society, Americans for Nonsmokers' Rights, American Heart Association, American Lung Association, and the Campaign for Tobacco-Free Kids -- would like to see that enacted as a permanent policy at Saracen as well as two other casinos currently operating in the state; Oaklawn Park Casino in Hot Springs and Southland Casino Racing in West Memphis.

"As businesses re-open across the state and nation, many are considering smoke free policies to protect their workers from secondhand smoke and covid-19 transmission," the organizations said in a joint news release. "Two Arkansas casinos, Oaklawn Park Casino and Southland Casino, have already adopted smoke-free policies as a part of their covid-19 safety protocols. We encourage these casinos to remain permanently smoke-free and for the new Saracen Casino to open and remain permanently smoke-free as well."

The release said that although scientific evidence presents no link between secondhand smoke exposure and covid-19, the fact that covid-19 is spread through inhalation of aerosolized droplets from an infected person, "transmission risk increases when people engage in behaviors that increase the likelihood of transferring respiratory droplets and when people engage in activities that increase the likelihood of touching their faces or mouths."

Michael Keck, a spokesman for the American Cancer Society Cancer Action Network, said ideally, for the health and safety of both patrons and employees, all workplaces, including casinos, should be smoke free. He said that, in Arkansas, the problem of secondhand smoke is particularly acute.

"Nationally, smoking and tobacco utilization has fallen to about 12%, but in Arkansas it has remained at around 22%," Keck said. "Because of that we have a higher incidence of cancer across the board and we also have higher lung cancer cases and deaths in Arkansas."

Keck said that overall, 34% of cancer deaths can be attributed to tobacco use.

"What we look for are opportunities that can impact tobacco utilization," he said. "If people aren't utilizing tobacco, there's less likelihood of the incidence of cancer."

"If we can have a venue like Saracen Casino open up and be smoke free, ...[that] is the current trend in this covid environment as more and more casinos open smoke free," he said. "With Oaklawn and Southland being smoke free, we think it would be great if Saracen did the same thing."

According to Carlton Saffa, project manager at Saracen, neither venue will have a "no smoking" policy per se, but both venues will enforce a mask requirement to the point that patrons who smoke will have to exit the building to do so or they will be in violation of the mask policy.

Screens throughout the facilities, Saffa said, display notices that say, "While Saracen is a smoking facility, masks must be kept on. At this time please step outside to smoke/vape."

"I think the sign speaks for itself," Saffa said.

In 2019, the Legislature passed an exemption to the Arkansas Clean Indoor Air Act of 2006, which exempts designated smoking areas on the gaming floor of any casino licensee of the Arkansas Racing Commission.

"We never have made a change in our policy," he continued.

"We believe the Arkansas Legislature was correct in its action exempting casino licensees from the Clean Indoor Air Act. Saracen believes that the will of the Legislature was very clear that we are an exempt entity so that has always been our policy position."

Saffa said that the fact smoking is not currently occurring on the gaming floor is not a change of policy but a reflection of commitment for the mask mandate.

"That's a different way of approaching it," Keck said. "I think it would be better to be a little more direct....If a mask is what keeps them from smoking to start off with, maybe that will give them time to implement that smoke free policy for when we get through this coronvirus."

Saffa said in addition to the Legislature, a Pine Bluff City Council member, Bruce Lockett, had tried and failed to bring the issue to the public in the form of a ballot measure, but was only able to gather about 500 of the 2,000 signatures needed to bring it to a vote. Last week, Lockett said he is not likely to bring the issue up again anytime soon.

"I'm the lone ranger on the council as far as seeing this as a public policy issue," Lockett said. "I've taken this as far as I can in terms of engaging the community with a petition drive and engaging my council members to consider legislation. The will of the people right now is so strong in viewing this as an economic development asset that I don't see this gaining any altitude."

Spokespeople for Oaklawn and Southland both said those casinos, while currently requiring smokers to light up outside, did not commit to either position as far as policy is concerned.

In an email, Dave Wolf, president and general manager at Southland, said smoking is not currently allowed inside the building and, moving forward, said the issue would receive further study.

"During the covid-19 pandemic," Wolf said, "Southland Casino Racing will continue to prohibit smoking inside the casino, a change that has garnered significant positive feedback from guests. Going forward we will continue to evaluate the smoking policy."

Jennifer Hoyt, spokesperson for Oaklawn, said the issue will receive scrutiny there as well, but that currently a permanent smoking ban is not under consideration.

"As of right now it is because of the mask mandate," Hoyt said. "Not to say it won't become permanent but right now that's why we're doing it."

Hoyt said any decision to make the ban permanent would be based on business considerations.

"Right now, it doesn't look like the mask mandate will be lifted anytime soon," she said.

"Right now we're following the CDC guidelines and kind of taking it from there."