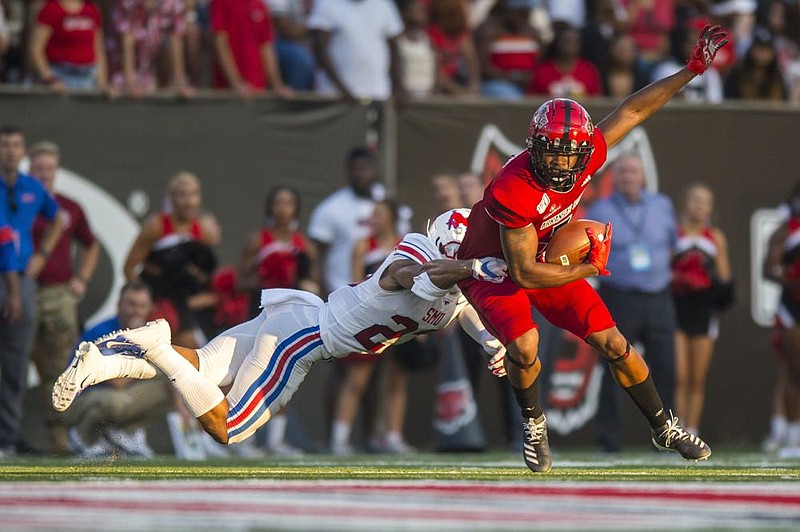 And, no, it wasn't against Kansas State.

"His freshman year he made a hell of a catch," Bayless said, thinking back to a practice early in the 2017 season. "And man, when I say it was crazy, it was crazy."

Bayless said the catch was reminiscent of the famous 2014 Odell Beckham Jr. catch when the then-New York Giants wide receiver reached back and snagged a 43-yard touchdown pass one-handed against the Dallas Cowboys -- a highlight still widely discussed today.

"Jay had a go-ball and it was a 40-yard, 50-yard go," said Bayless, ASU's second all-time leader in receiving yards with 2,775 between 2016-19. "The DB was all over him and he jumped up, made a one-handed catch with his right hand and scored a touchdown falling backwards. He's made some great plays, but I'll never forget that one."

Four years and 101 career catches later, Adams has gotten the attention of the college football world with his dazzling one-handed, contested grabs. Adams put them on national display against Kansas State a week ago in Arkansas State's 35-31 victory, as FOX's Joel Klatt deemed him a "superstar" after the senior wide receiver caught three touchdowns passes -- all on a partially torn MCL.

But the basis of Adams' success isn't something that's easily taught. According to his father, former ASU running back, Jonathan Adams Sr., "it's a natural, God-given talent." That talent is the ability to win 50-50 balls with a combination of his hips, vertical, hands and all around knack for the ball.

He has flexible hips, allowing him to change direction quickly on back shoulder throws. He has a 40-inch vertical jump, allowing him to perfectly time and catch the ball at his highest point. He has strong hands, allowing him to catch the most difficult of passes with only his fingertips -- even when they don't always necessarily count. And he has a unique knack for the ball, allowing him to turn those 50-50 balls into "80-20 balls," as Coach Blake Anderson pointed out after the Kansas State game.

All of that, on top of the leadership skills he's exemplified this season, has Adams primed to be Arkansas State's first NFL Draft pick since 2014.

"I think what is his dominating trait right now is his ability to win at the catch point," said Jordan Reid, a senior NFL draft analyst for The Draft Network. "I had him as a late-round guy, sixth or seventh round -- that's the grade we put on him coming into the year. But if he keeps up this progression, now you're talking about an early day three guy. He could enter the fourth or fifth round discussions and maybe even better than that if he stays on the track that he's shown so far."

A dual-sport athlete at Jonesboro High School, for a long time Adams thought he wanted to play college basketball -- and he did his sophomore year at ASU, playing in three games for the Red Wolves. He credits much of his football success to the lessons he learned on the basketball court.

Adams was a tenacious rebounder and defender at Jonesboro, averaging 12 points and seven rebounds per game and helping the Hurricane go 32-0 and win a 6A state title his senior year. He was Jonesboro's starting center at 6-foot-3 and was considered the best dunker on the team.

"I think just being a guy on the court who's being physical and just get every rebound," Adams said. "My senior year I had to play a bigger position even though I was an undersized big. But I still played it because of how physical I was."

That physicality has translated to the football field and is what makes him so effective at catching jump balls.

Since arriving at Arkansas State, Adams has put on 25 pounds of muscle, giving him the strength to overpower most cornerbacks and safeties that defend him. ASU wide receiver coach Kyle Cefalo said because of Adams' size, the Red Wolves try to isolate him because when the quarterback "looks over and sees No. 9 one-on-one, we're going to like that matchup in just about every scenario."

"That's just what Jay does. I know everyone was impressed, but we've seen Jay do this in practice hundreds of times," Cefalo said of Adams' big-play ability. "When the ball is in there air, there's no more coaching to be done. That's when Jay has to go be special and that's what he did [against Kansas State]."

Adams has improved drastically at completing jump balls since last year, after catching 9 of 28 contested targets in 2019, according to Pro Football Focus. This year, he's already 5 of 8 and was 4 of 6 against Kansas State. Thus far this season, Adams has better used his frame against smaller defenders.

And scouts have taken notice.

"What he did in the first two games, certainly didn't hurt," said Dane Brugler, an NFL Draft analyst for The Athletic. "He's very physical to the football -- he can beat defensive backs at the catch point. I think what you like about him is his size. He's 6-foot-3, with very long arms and provides that long strike zone for the quarterback.

"With his ability to attack the ball in the air with that body control, that's certainly something that has the attention of NFL scouts."

The only knock both Brugler and Reid had on Adams was his speed.

The two said he doesn't have top-end speed where he's just going to blow by corners and easily separate. He needs to show better sink and snap in his routes and do better in terms of stacking corners and getting that little bit of separation at the top of a pattern. But they also agreed that's something he can easily improve upon.

And with his partially torn MCL -- which won't require surgery -- his speed is only going to increase after it heals.

"You can see there's a lot of teachable moments where he can improve and he has some of the uncoachable traits that you don't see in receivers, and that's just having that want-to and that 'my ball' mentality at the catch point. And you saw that all day long against Kansas State."

Brugler and Reid said with Adams entering the season as a borderline draft pick it was important for him to have a big game against Arkansas State's lone Power 5 opponent. For him to have what might be his best game of the season against a team such as Kansas State -- catching 8 passes for 98 yards and 3 touchdowns -- will be huge boost when scouts turn on the tape.

"For NFL scouts, at the end of the year when they go back and review some of the film, they're going to look at Arkansas State's schedule and if they have a Power 5 opponent, that's going to be one of the first games they watch. No doubt," Brugler said. "We can have the conversation about just how good Kansas State's corners and secondary are, but because it is a Power 5 opponent that is a tape that NFL teams when they're talking about Jonathan Adams that's absolutely going to be a tape they're going to make sure they watch."

"He's a guy that has next-level potential. And he's creating that platform to give himself that opportunity at the next level," Bayless said. "You can't coach the talent he has. And Jay has loads of talent."