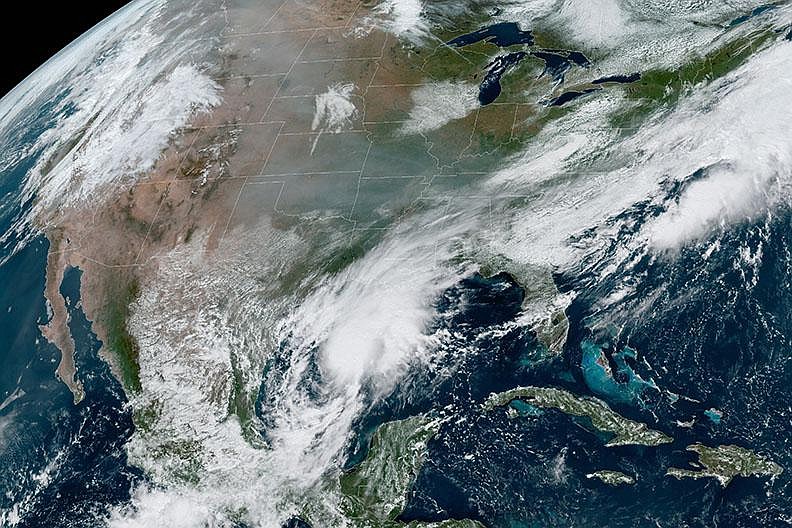 This satellite image taken Friday by the National Oceanic and Atmospheric Administration shows smoke from Western wildfires drifting across the continent, remnants of Hurricane Sally in the Southeast and dry air in between. (AP/NOAA)

America's worsening climate change problem is as polarized as its politics. Some parts of the country have been burning this month while others were underwater in extreme weather disasters.

The already parched West is getting drier and suffering deadly wildfires because of it, while the much wetter East keeps getting drenched in mega-rainfall events, some hurricane related and others not. Climate change is magnifying both extremes, but it may not be the only factor, several scientists told The Associated Press.

"The story in the West is really going to be ... these hot dry summers getting worse and the fire compounded by decreasing precipitation," said Columbia University climate scientist Richard Seager. "But in the eastern part more of the climate change impact story is going to be more intense precipitation. We see it in Sally."

"The things I worry about are completely different now," Dello said. "We know the West has had fires and droughts. It's hot and dry. We know the East has had hurricanes and it's typically more wet. But we're amping up both of those."

In the federal government's 2017 National Climate Assessment, scientists wrote a special chapter warning of surprises due to global warming from burning of coal, oil and natural gas. And one of the first ones mentioned was "compound extreme events."

"We certainly are getting extremes at the same time with climate change," said University of Illinois climate scientist Donald Wuebbles, one of the main authors.

Since 1980, the National Oceanic and Atmospheric Administration has tracked billion-dollar disasters, adjusting for inflation, with four happening in August including the western wildfires. NOAA applied meteorologist Adam Smith said that this year, with at least 14 already, has a high likelihood of being a record.

Fifteen of the 22 billion-dollar droughts in the past 30 years hit states west of the Rockies, while 23 of the 28 billion-dollar non-hurricane flooding events were to the east.

For more than a century scientists have looked at a divide -- at the 100th meridian -- that splits the country with dry and brown conditions to the west and wet and green ones to the east.

Seager found that the wet-dry line has moved about 140 miles east -- from western Kansas to eastern Kansas -- since 1980.

And it's getting more extreme.

Nearly three-quarters of the West is now in drought, according to the U.S. Drought Monitor. Scientists say the West is in about the 20th year of what they call a "megadrought," the only one since Europeans came to North America.

Meager summer rains are down 26% in the last 30 years west of the Rockies. California's summer rain has dropped 41% in the past 30 years. In the past three years, California hasn't received more than a third of an inch of rain in June, July and August, according to NOAA records.

California also is suffering its worst fire year on record, with more than 5,300 square miles burned. That's more than double the area of the previous record set in 2018. People have been fleeing unprecedented and deadly fires in Oregon and Washington with Colorado also burning this month.

During the western wildfires, more than a foot rain fell on Alabama and Florida as Hurricane Sally parked on the Gulf Coast, dropping as much as 30 inches of rain at Orange Beach, Alabama. Studies say hurricanes are slowing down, allowing them to deposit more rain.

Pennsylvania State University climate scientist Michael Mann said that La Nina -- a temporary natural cooling of parts of the equatorial Pacific that changes weather worldwide -- is partly responsible for some of the drought and hurricane issues this summer. But that's on top of climate change, so together they make for "dual disasters playing out in the U.S.," Mann said. 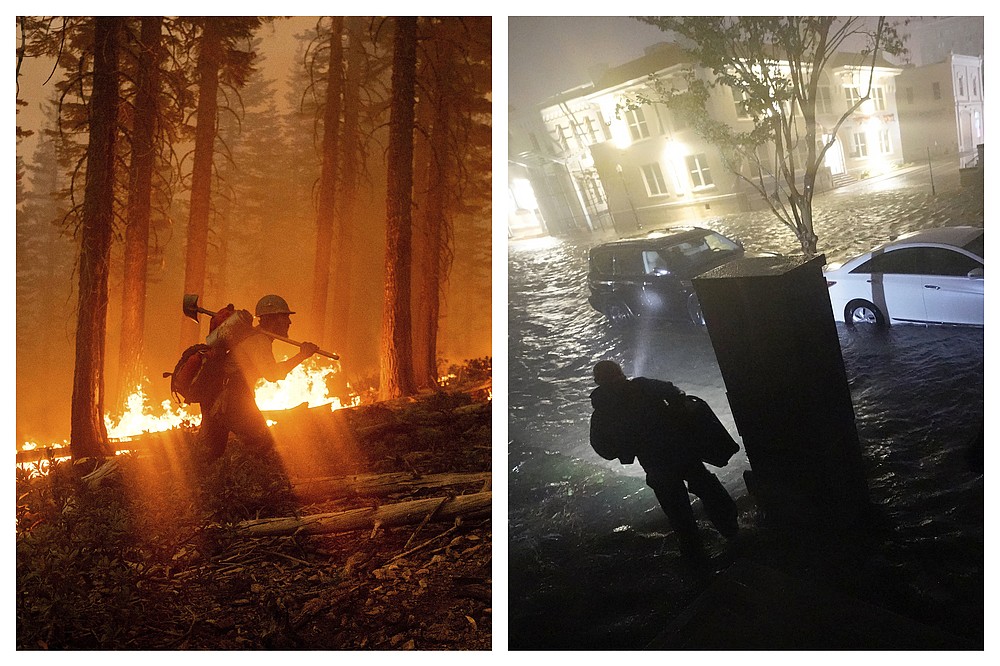 This combination of photos shows a firefighter at the North Complex Fire in Plumas National Forest, Calif., on Monday, Sept. 14, 2020, left, and a person using a flashlight on flooded streets in search of their vehicle, Wednesday, Sept. 16, 2020, in Pensacola, Fla. In the past week, swaths of the country have been burning and flooding in devastating extreme weather disasters. (AP Photo/Noah Berger, Gerald Herbert)