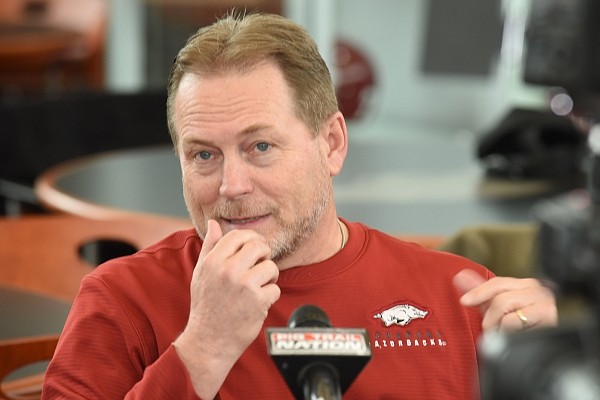 Scott Fountain, an assistant coach with the University of Arkansas football team, speaks with members of the media Thursday, Feb. 6, 2020, inside the Fred W. Smith Football Center on the campus in Fayetteville. - Photo by David Gottschalk

FAYETTEVILLE -- Sam Pittman didn't have to look far to secure his first special teams coordinator at the University of Arkansas.

Scott Fountain was right there in the neighborhood.

The street was in Athens, Ga., and Fountain, the Alabama native, was valued because he has excelled at a series of hugely successful programs and coached in four national championship games. Pittman and Fountain grew close during three years of overlap on Kirby Smart's Georgia staff.

Remember the famous "Kick Six" 109-yard return for Auburn's Chris Davis that beat Alabama on the final play of the 2013 Iron Bowl? That came on Fountain's watch as special teams coach and tight ends coach with the Tigers.

"Coach Fountain, he's a genius," said linebacker Grant Morgan, who is expected to be on multiple special teams again this year. "His past records and stuff doesn't just come from being lucky. Coach Fountain is one of those guys, he's going to demand perfection from you."

Fountain is the first dedicated special teams coordinator for Arkansas since the NCAA allowed coaching staffs to expand to 10 full-time assistants.

Instead of spending a couple of active periods in special teams per practice, then sending the kickers, punters, long snappers and holders off to another field with a graduate assistant, Fountain works with the specialists the entire practice.

"I've worked for schools that have split [special teams duties] up, and what you find out is the linebackers coach cares about coaching the kickoff coverage, but linebackers are a lot more important," Fountain said.

The same applied when Fountain broke into the college game at Florida State (1994-96) as an offensive graduate assistant who helped with the kicking game.

"The guy that was in charge of the kicker, punter, long snapper would coach the running backs and he would just say, 'Hey, y'all go to the stadium. Y'all do your thing and come back,' " he said.

"You flip that over and you go, 'Hey, I want to hire a guy that does teams, and we're going to be good on teams.' I get to coach the specialists and the special teams meeting, but I also get to leave and go to specialists meeting and coach them on kicking, punting and long snapping, those techniques.

"I'm not worried about a tight end. When I was at Auburn I did special teams and tight ends, but I was over all the teams. At Georgia, [Smart] gave me an opportunity to just do teams, so I think you can really help your organization buy in."

Graduate transfer kicker A.J. Reed said having a coach assigned solely to the specialists is one of the reasons he chose the Razorbacks after earning All-Atlantic Coast Conference honors at Duke last season.

"He is 100% dedicated to special teams, which is special," Reed said. "That's not the norm in college football. Having him around us at all times really keeps us locked in.

"He's such a detail-oriented guy that it rubs off on all of us as a group as specialists. I think we've gotten a lot better just being with him every day on the field and in the meeting room."

"You can hold your coaches that help you on teams ... more accountable as well and make sure they're doing a great job," Fountain said. "Hopefully it'll pay dividends for us here."

When Pittman first got a notion he might be in the running for the Arkansas head coaching job in November, he spoke immediately to Fountain.

Fountain said the situation he had at Georgia -- where he coached Lou Groza Award winning kicker Rodrigo Blankenship -- was comfortable, but Pittman's offer was compelling.

"Pittman did a good job of recruiting me, one, and I think a lot of him and you know, each week it seemed like somewhere around game 7 or 8 he kept showing up in my office ... and he started talking about Arkansas," Fountain said.

Pittman's overtures were answered with a "Yes," and Pittman informed Smart about Fountain's intentions before the Bulldogs beat Baylor in the Sugar Bowl.

"I just thought working for a guy like Sam Pittman was a great opportunity, and I really liked the names I was hearing he was hiring as the OC and DC as well," Fountain said, referencing Kendal Briles and Barry Odom.

"I love him and his family," Pittman said of Fountain. "I'm sure it was difficult for him to go in there after they won the Sugar Bowl and decide to come to Arkansas -- because he's from Alabama, from that neighborhood -- but he came.

"It's his special teams. Obviously, just like all the coordinators, I'll have say-so in what we're going to do, but I believe in hiring people that can coach and letting them coach. He certainly can. He's been a great asset for our program."

The Razorbacks have been strong in the kicking department and solid in snapping, holding and the return game in recent seasons, but their punting, kick coverage and touchback percentage on kickoffs are in dire need of an upgrade.

"He is a thorough football coach," Pittman said. "He's a meticulous football coach. Very knowledgeable and a proud man. He wants that product that he puts out there to be a reflection of him and his work.

"He's been a lot of places, a lot of good places. We were just really fortunate that he decided that he chose us. Again, I'm putting the friendship totally separate. If I said I didn't like him at all, I'd still think he was a good special teams coach."

The Razorbacks have a pair of veteran return men with nice credentials in senior De'Vion Warren and sophomore Treylon Burks, and they're expected to be bolstered by senior T.J. Hammonds and others this season.

Long snapper Jordan Silver is back for this third season as the starter, and he has a good track record.

There are good position battles going on at kicker between Reed and Matthew Phillips, and also at punter, where Michigan transfer George Caratan is in competition with returners Sam Loy and Reid Bauer.

Caratan is also on track to be the lead holder for the kicker, a change from reserve quarterback Jack Lindsey's manning that position last year. Lindsey is still working as a holder, but Fountain prefers the long daily bonding that a punter can achieve with the snapper and kicker in how he identifies his holders.

Kickoff man Connor Limpert improved his touchback percentage to 51.8% last season (28 of 54), but that number could stand improvement with new personnel.

Fountain's work with Blankenship helped the Georgia kicker improve his touchback percentage dramatically, from the 33% range up into the high 80s.

"Coach Fountain's philosophy with that whole thing is that he's going to keep your leg fresh during the year," Reed said. "In camp, you have to practice more often than in the regular season. So it's a little bit more strenuous then, but we've done a really good job of getting rest days and being smart with that, so I feel great right now."