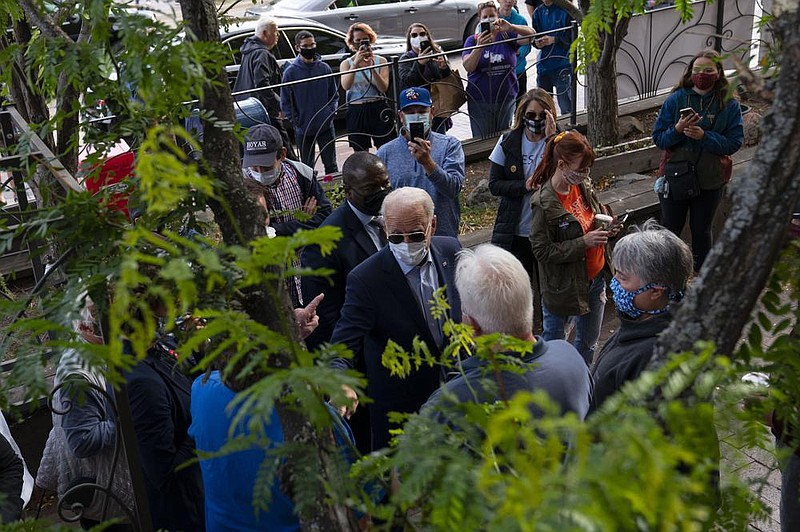 DULUTH, Minn. -- A solidly blue state for the past half century, Minnesota became an unquestioned presidential battleground on Friday as President Donald Trump and Democratic challenger Joe Biden fought for working-class voters in dueling events that marked the beginning of early voting.

Biden railed against Trump's inability to control the pandemic, casting the president's reluctance to embrace more serious social distancing safeguards as "negligence and selfishness" that cost American lives. Trump, before leaving the White House, said as he has many times that "we've done a phenomenal job" against the virus and predicted mass vaccinations by spring.

Biden's motorcade rolled into downtown Duluth, Minn., where he stepped out onto a brick plaza in front of Little Angie's Cantina and Grill and began to elbow bump and chat with passersby.

Within minutes, a crowd of around 200 gathered, nearly all of them in masks except for two men in Trump hats. It was the largest in-person crowd Biden has had since the pandemic exploded in March.

One man yelled from a deck above the plaza, "Go home, Joe!"

Two women closer to Biden responded, "You are home, Joe."

The candidates steered clear of the state's most populated areas near Minneapolis to focus on blue-collar voters, some of whom shifted to Republicans for the first time in 2016. Trump went to Bemidji, Minn., about 200 miles north of Minneapolis, while Biden campaigned in a suburb of Duluth, Minn., on the banks of Lake Superior and close to the Wisconsin border.

Biden, at a carpenter union's training hall in Minnesota, emphasized his plans to boost American manufacturing.

"It's time to reward hard work in America and not wealth," Biden declared with roughly a dozen workers looking on."When the government spends taxpayers' money, we should spend that money to buy American products made by American workers and American supply chains to generate American growth."

He promised to invest $400 billion in federal money over his first term to ensure more products are made in America.

Since narrowly losing Minnesota in 2016, Trump has emphasized the state. He has visited regularly and kept a close eye on issues of particular importance to rural corners of the state.

He's reversed an Obama administration policy prohibiting the development of copper-nickel mining and has bailed out soybean, corn and other farmers who have been hurt by trade clashes with China.

More recently, he's embraced a "law and order" message. That's especially important in Minnesota, where the May killing of George Floyd by a police officer sparked protests and riots.

David McIntosh, president of the conservative Club for Growth, which has produced anti-Biden ads, said Minnesota may help the Trump campaign build momentum.

"They're looking beyond the poll numbers and seeing the potential there," said McIntosh, a former congressman from Indiana. "It's always smart strategy to go on offense somewhere."

Trump's path to Minnesota success likely depends on finding more votes in rural, conservative areas -- running up the score beyond his 2016 tally. It's a strategy he's trying to pull off in other states, and it depends on a robust field operation with the money and time to track down infrequent or first-time voters.

"I don't think they're there," said Joe Radinovich, a Democrat who lost a bid for a northern Minnesota congressional district in 2018. Radinovich noted the major organizational challenge and expense in tracking new voters, making sure they're registered and getting them to vote -- especially during a pandemic.

"We have relatively high turnout already," he said. "Most people vote. I just don't think it's there. I think those people showed up in 2016."

Still, Trump has spent more than a year building a sizable Minnesota ground game. Republicans are out knocking on doors and interacting personally with voters in ways that Democrats mostly have not, preferring online operations because of the coronavirus.

The president's reelection campaign announced this week a $10 million ad buy in a series of states, including Minnesota. It has spent nearly $17 million on advertising in the state since last October, compared with almost $6.3 million for Biden over the same period, according to a review of Kantar/CMAG data by The Associated Press.

Democrats warn that Biden still may have his work cut out for him.

Duluth Mayor Emily Larson said the Trump campaign has far outpaced Biden in local yard signs -- which indicates enthusiasm but may not ultimately affect the outcome.

"One of the things the Trump campaign has been very good about is visibility in Duluth but also in areas around Duluth," Larson said.

Information for this article was contributed by Steve Karnowski and Aamer Madhani of The Associated Press. 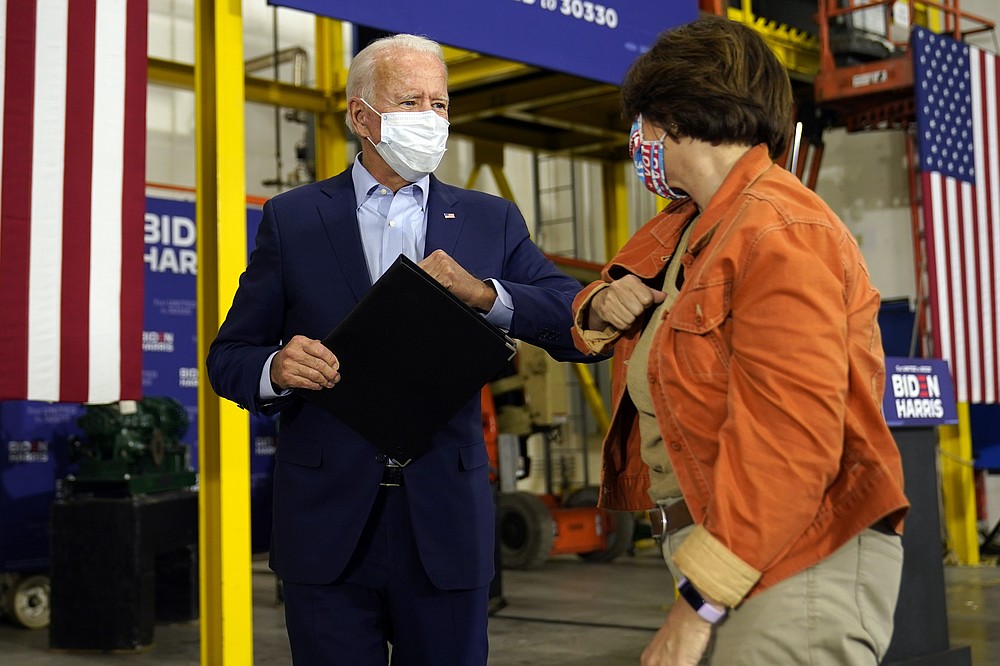 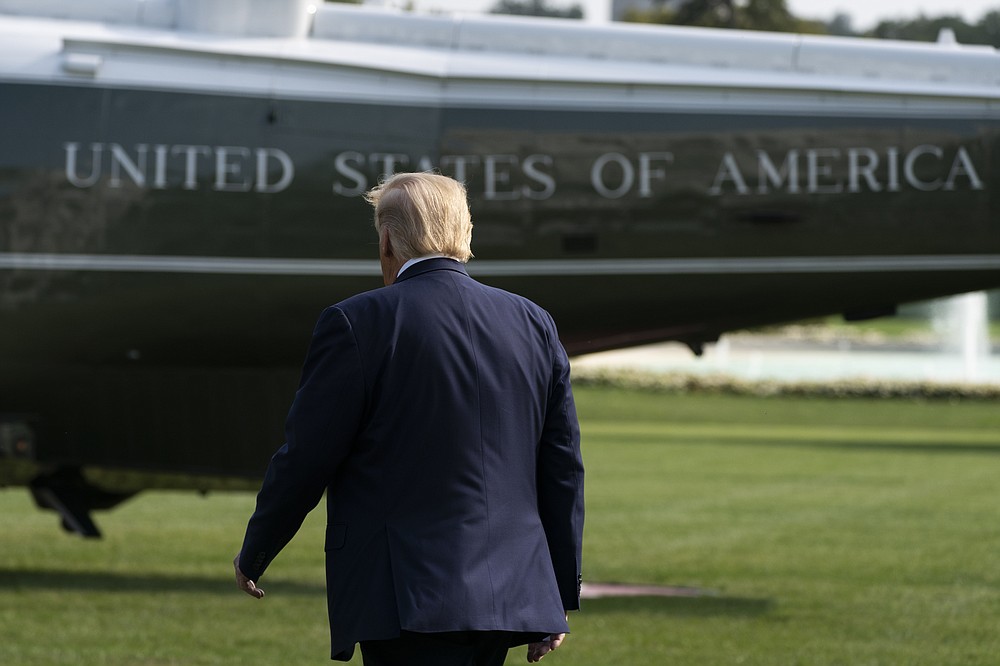 President Donald Trump walks to Marine One on the South Lawn of the White House, Friday, Sept. 18, 2020, in Washington. Trump is en route to Minnesota. (AP Photo/Alex Brandon) 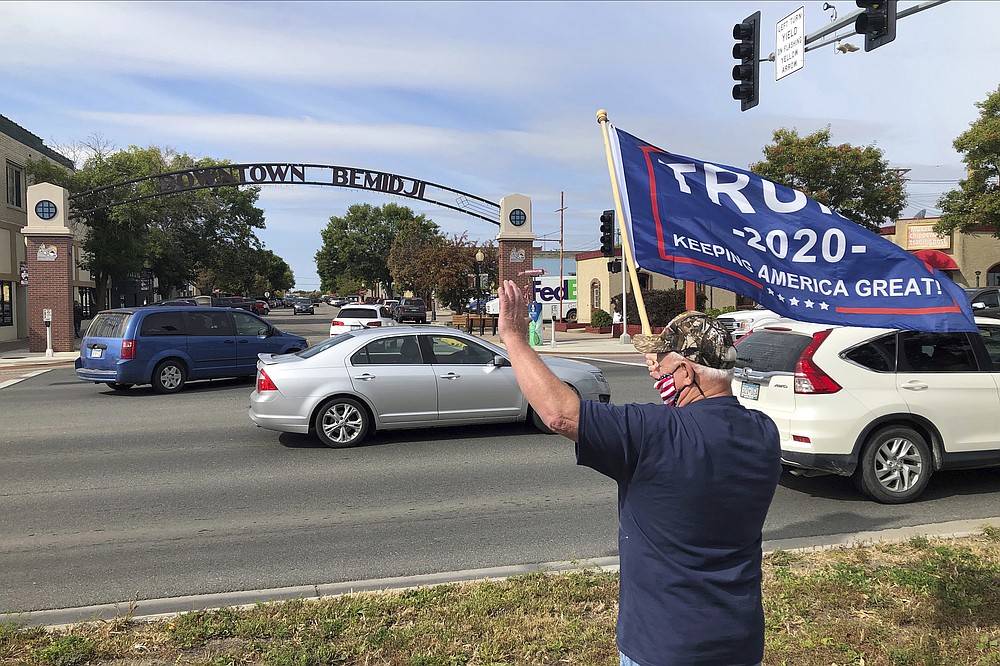 A supporter of President Donald Trump waves to passing cars Friday, Sept. 18, 2020 in Bemidji, Minn., where the President is slated to hold a campaign rally at the airport in the early evening. (AP Photo/Jim Mone) 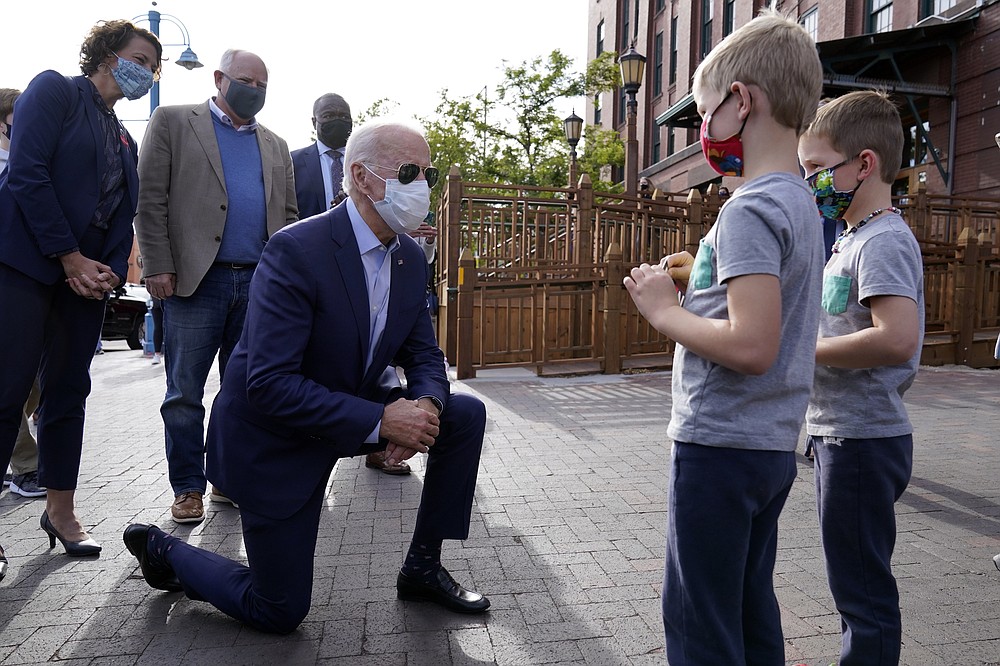 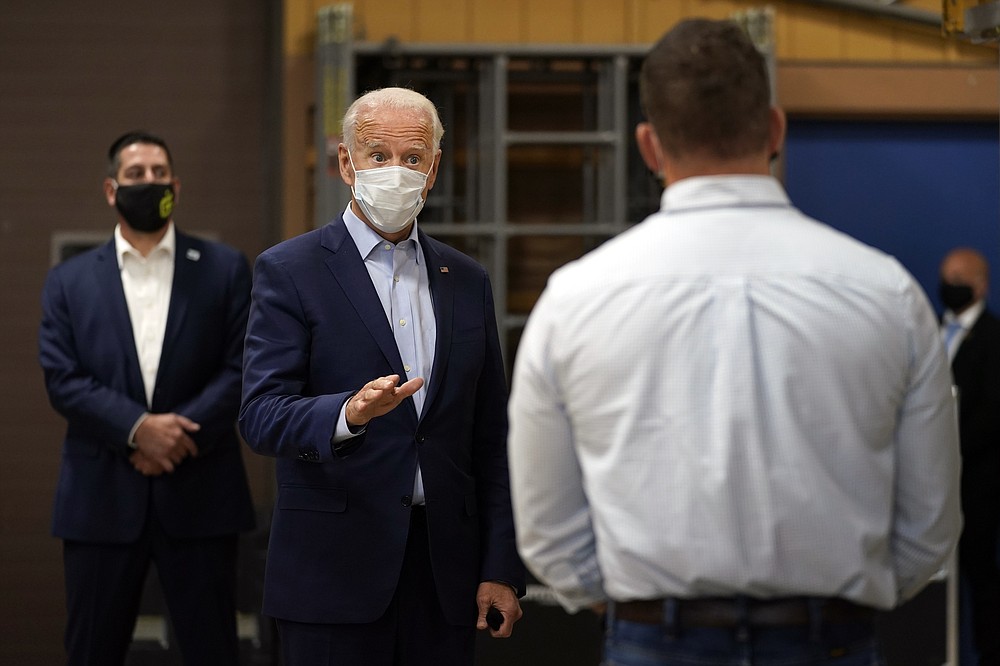 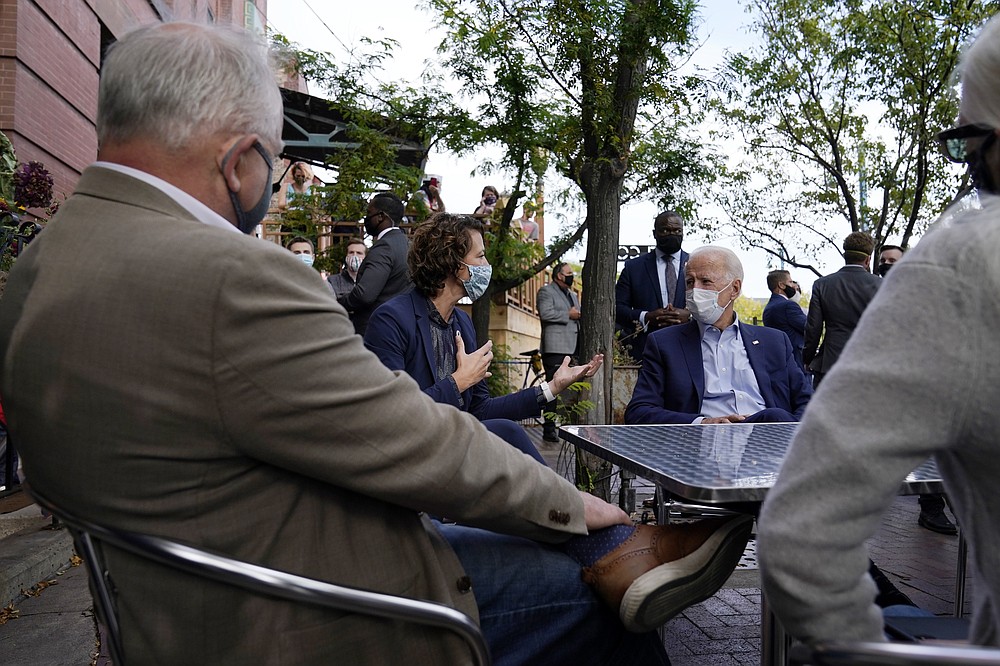 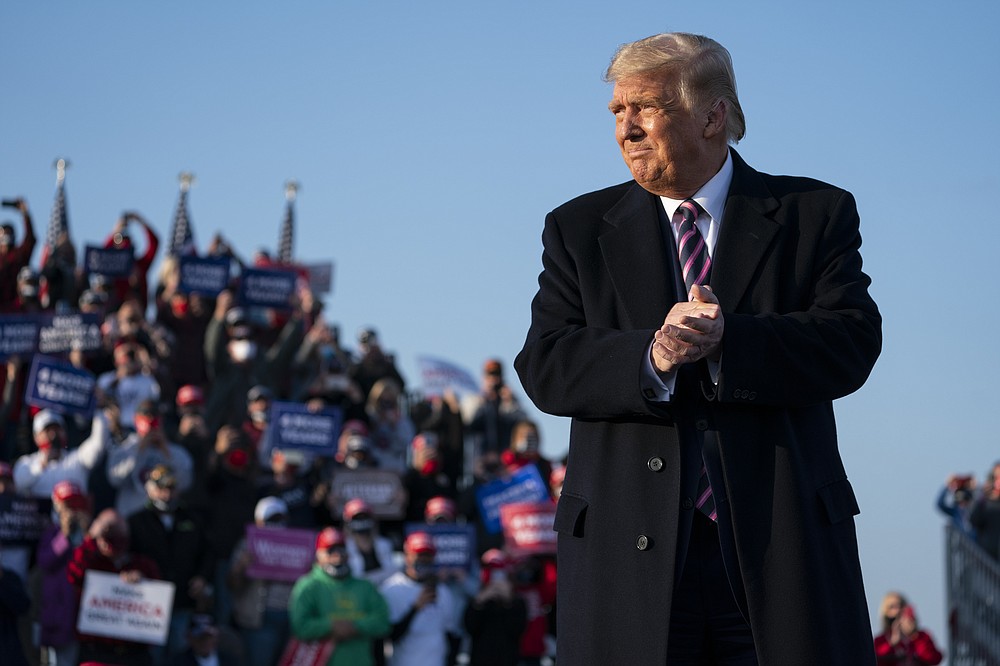