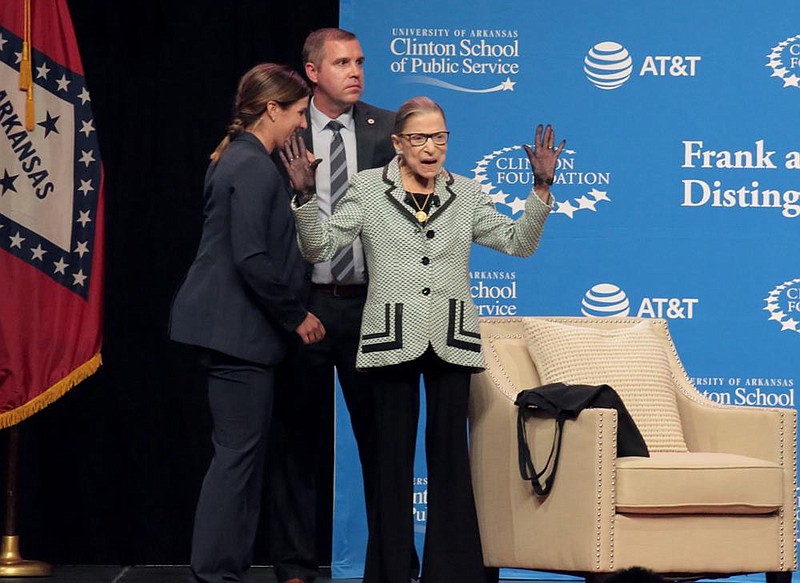 Arkansans from across the political spectrum paid tribute Friday to the late Justice Ruth Bader Ginsburg, noting her legal accomplishments and her decades of public service.

The state's two U.S. senators expressed sympathy for Ginsburg's loved ones, but neither addressed when to replace her on the U.S. Supreme Court.

In a written statement, former President Bill Clinton -- who appointed Ginsburg -- said he and his wife, former Secretary of State Hillary Clinton, would be "forever grateful" for Ginsburg's work and friendship.

"With the passing of Ruth Bader Ginsburg, America has lost one of the most extraordinary Justices ever to serve on the Supreme Court. She was a magnificent judge and a wonderful person -- a brilliant lawyer with a caring heart, common sense, fierce devotion to fairness and equality, and boundless courage in the face of her own adversity," Clinton said.

[Video not showing up above? Click here to view » https://www.youtube.com/watch?v=qOuA2_dauGc]

"Her 27 years on the Court exceeded even my highest expectations when I appointed her. Her landmark opinions advancing gender equality, marriage equality, the rights of people with disabilities, the rights of immigrants, and so many more moved us closer to 'a more perfect union.'

"Her powerful dissents, especially her ringing defense of voting rights and other equal protection claims, reminded us that we walk away from our Constitution's promise at our peril. And she did it all with kindness, grace, and calm, treating even her strongest adversaries with respect," Clinton said.

In a tweet, Cotton wrote: "I extend my condolences to the family of Justice Ruth Bader Ginsburg for their loss. She dedicated her life to public service, and now she is at peace."

Cotton did not immediately address questions about the timetable to replace her. A spokesman said Cotton wasn't available late Friday to comment.

Asked last week whether he would be interested in serving on the Supreme Court, Cotton portrayed the question as premature, saying, "That is very far down the road. I'm running for reelection and the president is running for reelection, and there are no vacancies on the Supreme Court and there are many, many qualified, highly capable conservative jurists on that list."

On Twitter on Friday evening, U.S. Sen. John Boozman of Rogers posted: "Sending my thoughts and prayers to the family of Justice Ginsburg. She battled cancer as fiercely as she made and defended ideas in the public square during her long public service career. The nation is thankful for her contributions and sends our condolences to her loved ones."

Four years ago, after the death of Justice Antonin Scalia, Boozman and Cotton helped prevent President Barack Obama from filling that vacancy, arguing that the decision should be made after that year's presidential election.

Through a spokesman Friday, Boozman declined to discuss how the new vacancy should be handled.

"He believes that the only focus right now should be on her life and contributions," spokesman Patrick Creamer said.

"It's a huge shock, of course, and I just send my condolences to her family and the people that loved her and were her friends," he said.

He cautioned against efforts to quickly replace her.

"If President Trump puts up a nominee, there should be hearings. It shouldn't be rushed. It should go through the process that is due for that high of an office," he said.

Michael John Gray, chairman of the Democratic Party of Arkansas, said his thoughts were with the family and friends of Ginsburg, whose passing he called "a scary moment" for women and those whose rights she advocated for throughout her career.

"Supreme Court justices are icons, and anytime you lose one you have to pause and take a look at the future," he said.

Turning to the immediate question of whether the Senate should act to confirm Ginsburg's successor before the Nov. 3 presidential election -- or wait until January if Democratic nominee Joe Biden wins the election -- Gray said senators should follow the precedent set in 2016, when Republicans refused to consider Obama's nomination of Merrick Garland.

"To push that through now would only create further division and show a lack of leadership," Gray said.

A spokesman for the Republican Party of Arkansas, Seth Mays, declined to offer a reaction to the political question, saying the party's thoughts were with the justice's loved ones.

"I'm sure that debate will happen, if I turn on cable news I'm sure it is happening, but we first want to circle back to her legacy," he said.

In a statement released by his office Friday evening, Gov. Asa Hutchinson said he and his wife, Susan, were "praying for her family and the nation in this time of loss."

The governor also posted on Twitter, "I so admire the tenacity and passion of Ruth Bader Ginsburg. Her passing will create a succession fight but most importantly, as a nation, we should honor her life of service."

"Justice Ruth Bader Ginsburg served our great nation for many years," Arkansas Attorney General Leslie Rutledge said in a statement. "She leaves behind a legacy that will know no boundaries. My prayers go out to her family and friends during this difficult time."

Former Arkansas Attorney General Dustin McDaniel, who argued a case before Ginsburg and other justices, also had the opportunity to visit with her one-on-one.

"She was one of the most amazing and engaging and brilliant and powerful people that I have ever had the occasion to meet," he said. Millions of lives "will be forever better because of her life and her career," he said.

McDaniel added, "She was tiny in physical stature, but as soon as you met her, you knew you were in the presence of a giant."

John DiPippa, dean emeritus of the University of Arkansas at Little Rock's William H. Bowen School of Law, said Ginsburg was a trailblazer long before Clinton named her to the nation's top bench.

"She would've been a giant figure in the law had she never served on the court because she was primarily responsible for the litigation that crafted the modern approach to women's rights," he said. "She handled a series of cases in the '60s and '70s that really did transform the law, and so she was a big deal before she was on the court. To me, that's her lasting contribution -- making the law take women seriously and treating them fairly."

A rush to replace Ginsburg would be unwise, DiPippa suggested, noting Republican efforts to prevent Obama from filling an election-year vacancy in 2016.

"Given the seriousness of this, the divided nature of the country and the lateness, I think, for the good of the country, we need to wait until after the election," DiPippa said.

By the end of her life, Ginsburg's fame had surpassed that of many Supreme Court justices.

She spoke a year ago this month at the Simmons Bank Arena in North Little Rock as part of a lecture series hosted by the Clinton School of Public Service and the Clinton Foundation.

Skip Rutherford, dean of the Clinton School, recalled that her lecture -- which was joined by former President Clinton -- was originally scheduled for a smaller arena at the University of Arkansas at Little Rock, but sold out in hours.

Even after moving the event to the 18,000-seat Simmons arena, Rutherford said, the event had a waiting list long enough to fill the arena twofold.

"We've had over 1,400 speakers and Justice Ginsburg far and away drew a larger crowd than all of them," he said, later adding, "As I looked out in the crowd during my opening remarks, it was remarkable to see the number of young girls whose mothers and grandmothers brought them to see Justice Ruth Bader Ginsburg."

One of the faces in the crowd was Arkansas Supreme Court Justice Courtney Hudson, who attended with her two daughters and son. Hudson, who was first elected justice in 2010, said Ginsburg "laid the foundation for women like me to have a seat at the table."

A year later, Hudson said, Ginsburg's speech remained a topic of conversation in her household, especially among her daughters.

"They were not only awestruck, they were moved as many young women today are, to see their pioneers and trailblazers," Hudson said.

Hudson said she drew inspiration from an even earlier interaction with Ginsburg, who spoke at the University of Arkansas, Fayetteville, School of Law in the mid-1990s, while Hudson was a law student there. It was a seminal moment not just in hearing a justice of the Supreme Court speak, Hudson said, but in hearing a woman speak bluntly about obstacles faced by women in the judiciary.

"It was the first time I heard from a woman wearing a robe who was unapologetic about her passion for encouraging other women to meet their potential," Hudson said. "She leaned into all of it."

After the event in North Little Rock last year, Rutherford said a small group went with Ginsburg to have dinner in the cellar of the Capital Hotel across the river.

"She was just engaging, inquisitive. We talked about public service, we talked about civil rights," Rutherford recalled. "I was in awe." 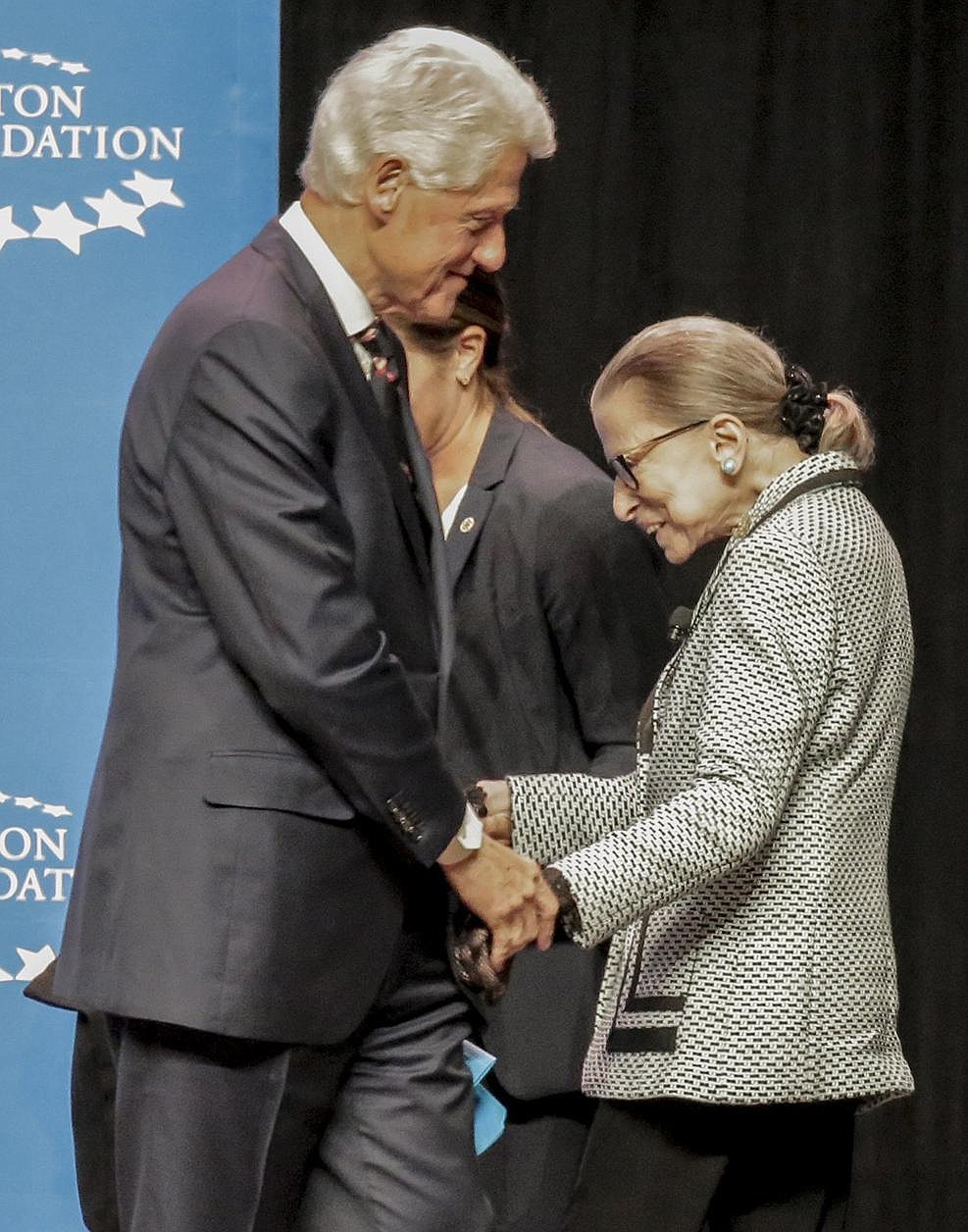