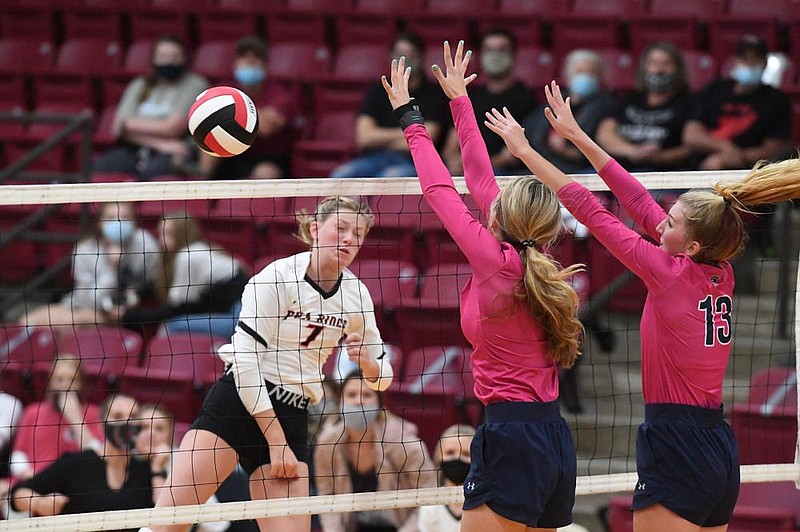 PEA RIDGE -- Shiloh Christian remained undefeated, but not without a little fight from Pea Ridge on Thursday night.

Shiloh Christian (8-0 in 4A-Northwest) got 15 kills each from Rylee Odell and Emerson Traweek to offset a match-high 18 kills from Pea Ridge's Josey Goldberg.

[Don't see the video above? Click here to watch: https://www.youtube.com/watch?v=qch0ogwOXSc]

Shiloh Christian coach Nathan Bodenstein liked the way his team bounced back from the second-set loss.

"We knew Pea Ridge was gonna come back and fight," Bodenstein said. "We thought a good start was really important but I give credit to them. We made like maybe 12 errors in that second set. I just said on a good team you can't gift them points.

"I'm really proud of how they came back though, kinda took back control. We got them out of system a lot. We know Josey Goldberg for sure is a stud, so we knew 'Hey, if they're out of system they're gonna go to her.' We could pretty much pick up our defense around that. I was just really proud of how they adjusted. We started triple blocking there at the end and that seemed to work."

Pea Ridge responded in the second set, scoring the final four points to earn the win. But then it was the Lady Saints' turn to answer.

Goldberg's ace gave the Lady Blackhawks a 7-6 lead in the third, but Shiloh Christian came with a 6-0 run and never trailed again in the set. The Lady Saints finally gained control in the fourth set with a 5-0 spurt for a 21-14 lead and went on to close out the match.

The 6-1 Odell chipped in with four aces and three blocks, while junior setter Kathleen Murphree had a team-high six aces to go with 21 assists. Katelyn Simpson led with 22 assists. Traweek put up a double-double with 10 digs to go with her 15 kills.

Ryli Russ led the defense with 19 digs for the Lady Saints. Goldberg also surpassed 1,000 kills for her career during Thursday's match.