Ready to 'hoop': At 39, Johnson not calling it a career 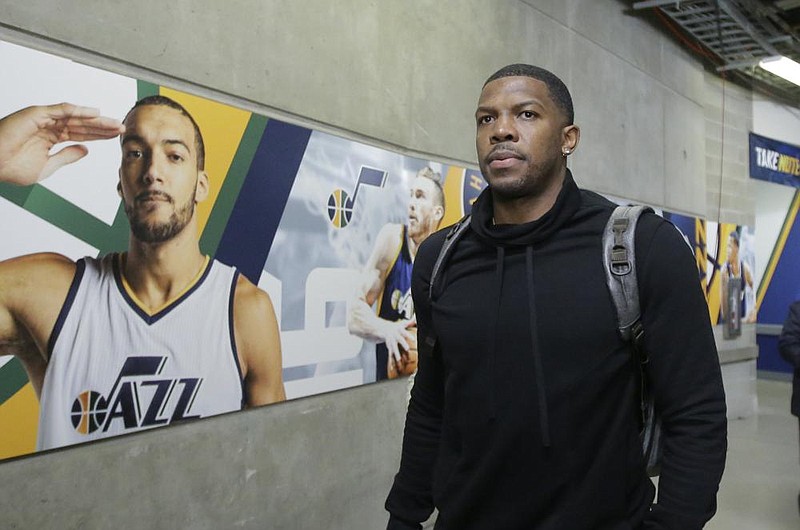 After starring at Little Rock Central and the University of Arkansas, the 6-7 Johnson played in the NBA for 17 years through the 2017-18 season.

In the summer of 2019, Johnson played in the BIG3 3-on-3 league and led his team, the Triplets, to the championship while earning MVP honors.

Then this summer Johnson, 39, played in The Basketball Tournament (TBT) for Overseas Elite.

"Yes Joe Johnson can get 20 points in his sleep in the NBA right now on a winning team if he wanted," Dwyane Wade, a 13-time NBA All-Star guard, tweeted during the TBT. "Not every night but off the bench not many guys could guard him in the 2nd unit."

Johnson and Wade were teammates with the Miami Heat during the 2015-16 season.

"I definitely appreciate what Dwyane said in his tweet," Johnson said in an interview earlier this week. "It just shows I've still been working my butt off.

"You can't do this at 39 and play full court and play at a high level the way I did in the TBT and not be taking care of your body."

Johnson said some NBA teams reached out to him after the TBT about the possibility of signing with them for next season. Playing overseas for a couple of seasons, Johnson said, also is an option he's considering.

"I still have that itch to hoop," he said. "I still love the game. I just can't give it up right now."

Johnson is a seven-time NBA All-Star and ranks 44th on the league's career scoring list with 20,405 points.

The quality and quantity of Johnson's production puts him No. 2 on the Arkansas Democrat-Gazette's list of top NBA Razorbacks.

"Joe should be on somebody's roster right now," said Darrell Walker, an All-American guard for the Razorbacks and a longtime NBA player and coach. "He doesn't need to play 35 minutes a night anymore, but he definitely can play 16 or 17 minutes and help your team.

Joe Kleine, an All-Southwest Conference center for Arkansas and 15-year NBA veteran, was the UA radio analyst when Johnson played for the Razorbacks.

"You could see pretty clearly that Joe would be a good NBA player," Kleine said. "He had great skills with good size and could shoot it. I didn't think he'd play 17 years in the NBA, but he's been blessed with a great body and he's taken care of himself."

Johnson, picked No. 10 overall in the first round of the 2001 NBA Draft by the Boston Celtics after his sophomore season at Arkansas, has played for seven teams as a pro.

"People don't keep signing bad dudes," Kleine said. "So I think part of Joe's thing is that he was very low maintenance, and he always played hard and did what was called on him to do. I think that endeared him to a lot of teams in the league, because you like playing with guys like that. Guys who are so professional and ready to play.

"On top of that, Joe had game. He had serious game. Everybody liked to play with Joe. I've never heard of anybody say anything negative about Joe Johnson."

Johnson said he has worked hard to stay in top shape physically.

"You get one body, and you've got to take care of it," he said. "That's your temple.

"Right now I'm in some of the best shape I've ever been in. I watch what I eat. I do a lot of hot yoga, which is so detoxifying for your body, so good for your muscles and joints and bones.

"I know I can't give that up, and that's definitely what's helped keep me going over the years. Especially these later years."

At the suggestion of Jannero Pargo -- a teammate at Arkansas who played in the NBA and is now an assistant coach for the Portland Trail Blazers -- Johnson decided to play in the BIG3 to help him get through a tough time personally.

Johnson's mother, Diane, died in February 2019 from multiple myeloma -- a cancer of the plasma cells.

"I did the 3-on-3 league strictly for therapeutic reasons," Johnson said. "The league started in June after I lost my mother a few months earlier. Being an only child, that was tough losing her. I just wanted something to keep me busy, and the BIG3 was it.

"Playing was probably the best thing for me. That's how Jannero presented it to me, prior to me committing to being in the BIG3. He said, 'I think it will be a good stress reliever, and it'll give us a chance to play on the same team again. We can have some fun and kick everybody's butt on the weekends.' "

"Man, just to be honest, it was probably the most fun I've had since my Arkansas days," Johnson said. "In all my years in the NBA, I got to the Western Conference finals twice, but I never made it to the big, big stage.

"Then 20 years after we played together at Arkansas, we had another chance to hoop and compete at a high level in the BIG3. For me, it was a win-win situation, and I took advantage of it."

The 1999-2000 team remains the Razorbacks' only SEC Tournament champions, and they won four games in four days -- after going in with a 15-14 record -- to earn an automatic NCAA Tournament bid.

"I just remember Coach [Nolan] Richardson saying that if we want to get the Big Dance, we've got to win four games," Johnson said. "We were young. I was 19 years old. I thought, 'Four games in four days, that's nothing.'

"We came out and played our brand of basketball, and we just willed ourselves to victory every game with the help of Coach Richardson and his system, and [assistant coach] Mike Anderson. Man, those guys did a hell of a job preparing us. But, at the end of the day when we got on the court, our confidence and instincts just took over."

Johnson averaged 16.0 points and 5.7 rebounds as a freshman with the Razorbacks. After undergoing ankle surgery before his sophomore season, he averaged 14.2 points and 6.2 rebounds.

"It doesn't seem like Joe ever grows old," Richardson said. "Even a couple of years ago, he was still doing some things he did when he was 25 years old.

Richardson said he's not surprised by Johnson's longevity as a player.

Johnson picked up the nickname "Iso Joe" in the NBA for his ability to isolate a defender and work one-on-one for a good shot, particularly in late-game situations.

"Joe Johnson is a Hall of Fame player," said Walker, who is now the coach at the University of Arkansas at Little Rock. "He made a lot of big shots in his career. He was never scared of the big moment. He was an unbelievable scorer.

"When the game was one the line with 10 seconds or less left, you put the ball in his hands and you had a really good chance of winning. He delivered a lot of times."

Johnson hit the 10th game-winning basket of his career when he lifted the Utah Jazz to a 97-95 victory over the Los Angeles Clippers in the 2017 playoffs. He drove to the lane and lofted a floater over Jamal Crawford and DeAndre Jordan that bounced around the rim and went through the basket in the game's final second.

"I just try to be patient, get to a sweet spot, and make the right play," Johnson said after the game.

"People call him 'Iso Joe,' but he was more than an isolation player," Walker said. "He could do it all. He had size, he could shoot it, he could put it on the floor. He could pass, he could post up, he could defend and rebound.

"There's a reason he was a seven-time All-Star. I love Joe Johnson."

Johnson, who has $220 million in career NBA earnings, said he would love to be elected to the Naismith Memorial Basketball Hall of Fame.

"I hope some day it happens," he said. "But that wasn't something I thought about back when I was 10 years old. I was just thinking more about trying to be the best hooper I could be."

Sidney Moncrief, an All-American for the Razorbacks and 2019 Hall of Fame inductee who starred in the NBA with the Milwaukee Bucks, prepared for Johnson as a Bucks' assistant coach.

"Joe's basketball IQ and his understanding of the game impressed me the most," Moncrief said. "You put that with a 6-7 guard with a great wingspan and a lot of skills, that's a dangerous combination."

"I've lived out the American dream," Johnson said. "It was my childhood dream to play in the NBA, and I got to do it for a lot of years at a high level.

"I don't have any complaints. I was able to earn a lot of money to where I could provide. So I enjoyed it."

Johnson splits his time between Little Rock and Atlanta, where his children, son Gavin, 13, and daughter Justice, 6, live.

There are offers to coach or scout for an NBA team. Johnson said he is considering them.

"I'd love to stay around the game," Johnson said. "I fell in love with the game when I was 6 or 7 years old, playing at the Thrasher Boys and Girls Club in Little Rock.

"The game has been so great to me and my family, that just to walk away from it? I couldn't do that. I feel like I've got so much to give back to the guys that are coming up now."

Whenever Johnson decides to stop playing professionally, he won't give up competing on the court entirely.

"You can always catch me playing at the Dunbar Rec Center in Little Rock," Johnson said. "I'm going to play there until I can't walk."

Ninth in a series on top NBA Razorbacks 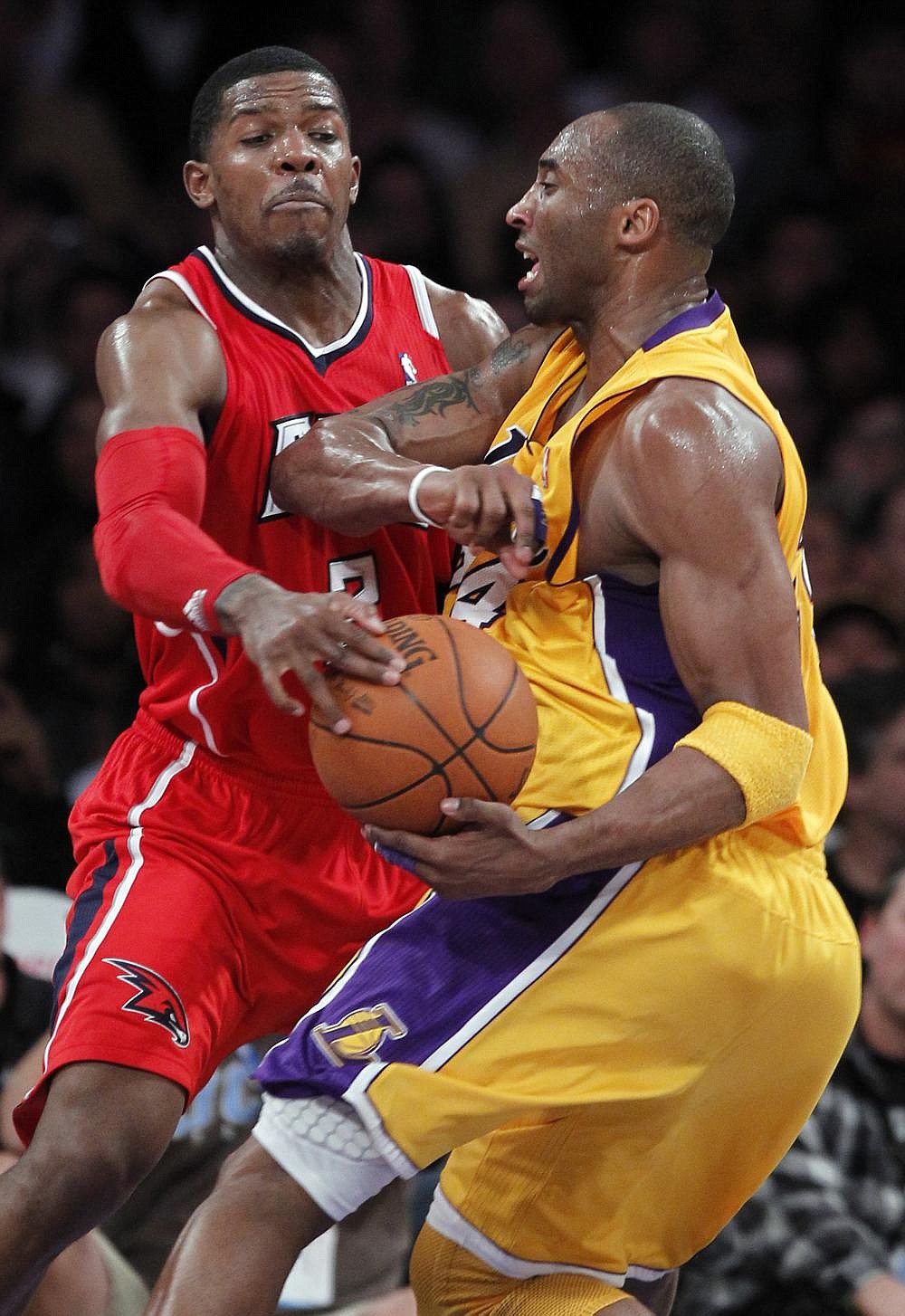 Former Arkansas guard Joe Johnson (left) strips the ball from Kobe Bryant during an NBA game in 2011. Johnson played 17 years in the NBA and was a seven-time All-Star, finishing with 20,405 points in his career. (AP file photo)
ADVERTISEMENT