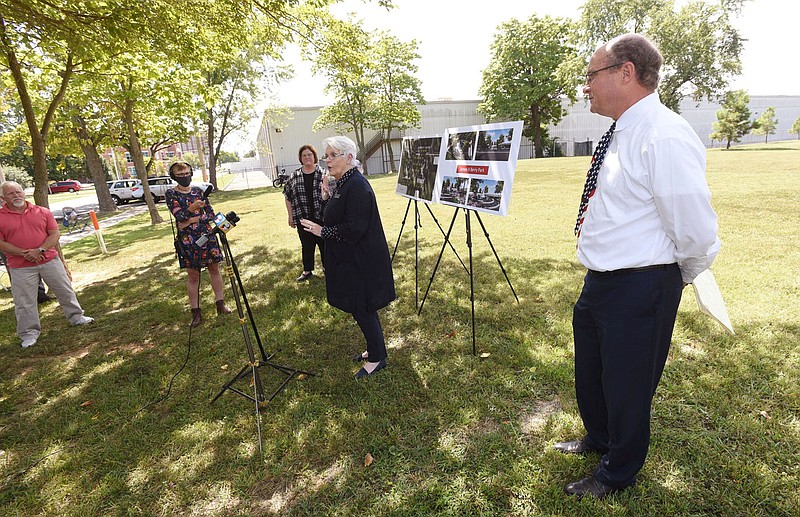 Joey McCutchen (right) hears remarks on Tuesday Sept. 15 2020 from Leah Whitehead (center) with the Benton County Historical Society at the site of the James H. Berry park in Bentonviile. The monument that was formerly on the Bentonville town square will be moved to the park. Go to nwaonline.com/200916Daily/ to hear more photos. (NWA Democrat-Gazette/Flip Putthoff)

BENTONVILLE -- The Confederate statue removed earlier this month from the downtown square will be the centerpiece of a new private park.

The Arkansas Division United Daughters of the Confederacy and the Benton County Historical Society unveiled designs for James H. Berry Park on Tuesday.

The park will be at the corner of Southwest Fifth and Southwest F streets, adjacent to the Bentonville Cemetery where Berry is buried. The one-acre park is privately owned, but will be open to the public, said Joey McCutchen, who represents the Daughters of the Confederacy.

The Confederate statue stood on the downtown square for more than 100 years before it was removed Sept. 2. The Daughters of the Confederacy, the group that owns the monument, announced June 1 it would move the statue to the park.

The new park will be privately funded and no taxpayer money will be used, McCutchen said. A cost hasn't yet been determined, he said.

"This is going to be a Benton County park, and I think that is very important," he said.

Berry was a Civil War officer, lawyer, Arkansas legislator, speaker of the state House of Representatives and circuit judge for the 4th Judicial District. He was elected Arkansas' 14th governor and then was a U.S. senator from 1885 to 1907, according to the Encyclopedia of Arkansas.

The park will be laid out in the form of a Maltese cross, said Ann Rossi, monuments chairwoman for the state Daughters of the Confederacy.

Janice LaBrie's chiropractor office is across from the park site. She said Tuesday that she isn't concerned about the park's location.

"I was glad it came off the main square," LaBrie said. "I didn't feel it was the appropriate place."

A target of pranksters throughout the years, the statue had lately become more of a lightning rod for racial tension. Two cannon balls on the monument were taken during a protest against police brutality June 1 on the square. The cannon balls were recovered.

The statue had become an ongoing concern for public safety even before the rally, Barry Moehring, county judge of Benton County, said in a June 2 statement.

"There are impassioned opinions on both sides of the issues surrounding the statue that have occasionally led to threats of vandalism and violence, and which in some rare instances have become reality. As the county judge, public safety is my primary concern, and so moving the statue out of the square is one step toward making the square safer for all residents of and visitors to Benton County and Bentonville," the statement said.

The new park's entrance will be on Southwest Fifth Street. Visitors will be able to see the monument and a memorial wall behind it as they enter. The monument will be surrounded by a circular reflecting pool with benches. The park also will hold three educational areas.

The monument will face west, just as it did on the downtown square.

Hedges and a fence, security cameras and lighting will be installed, McCutchen said. The monument was vandalized several times in the past. It is now being kept in a secure location and will be refurbished before being moved to the park.

Parking will be across the street from the park. Construction could begin early next year if not sooner, McCutchen said.

The monument, which consists of a pedestal and a statue of a bearded Confederate soldier, had been on the downtown square since 1908. It was on property owned by the county, Moehring said. Bentonville maintained the property, including beautification. The Bentonville Parks Department has since landscaped where the monument stood.

The monument has been listed on the National Register of Historic Places since 1996.

The agreement to remove the statue will allow the Daughters of the Confederacy to display and preserve the historical significance of the monument and its connection to the history of Benton County in perpetuity, according to the group's June 1 announcement. The Historical Society will own and operate the park and display the monument, according to the release. 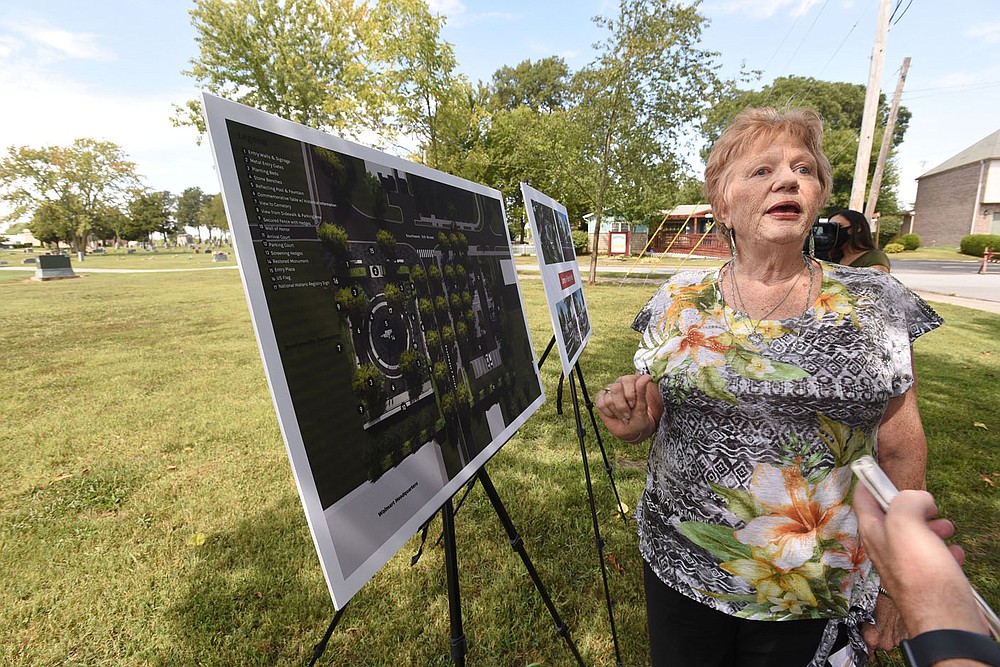 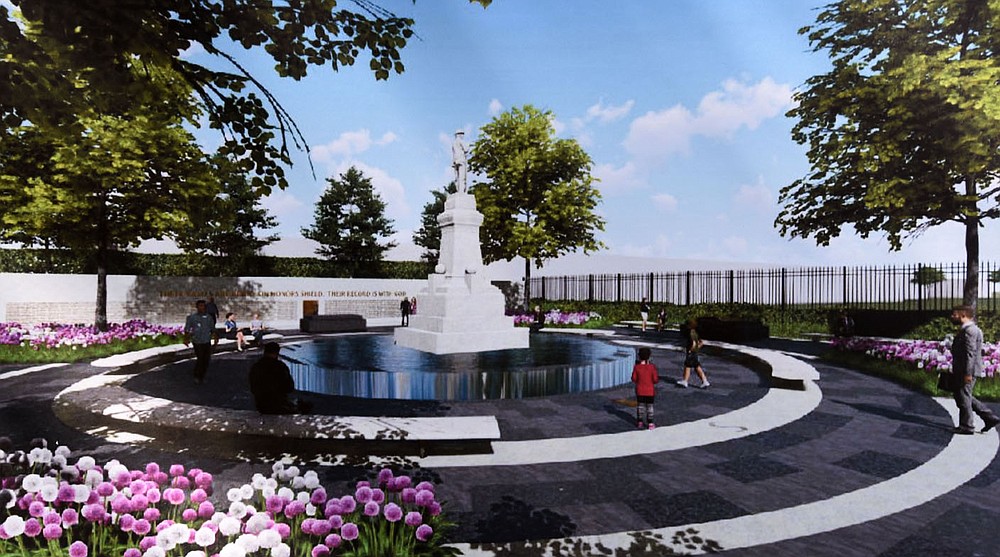 An artist's rendition of James H. Berry park in Bentonville. 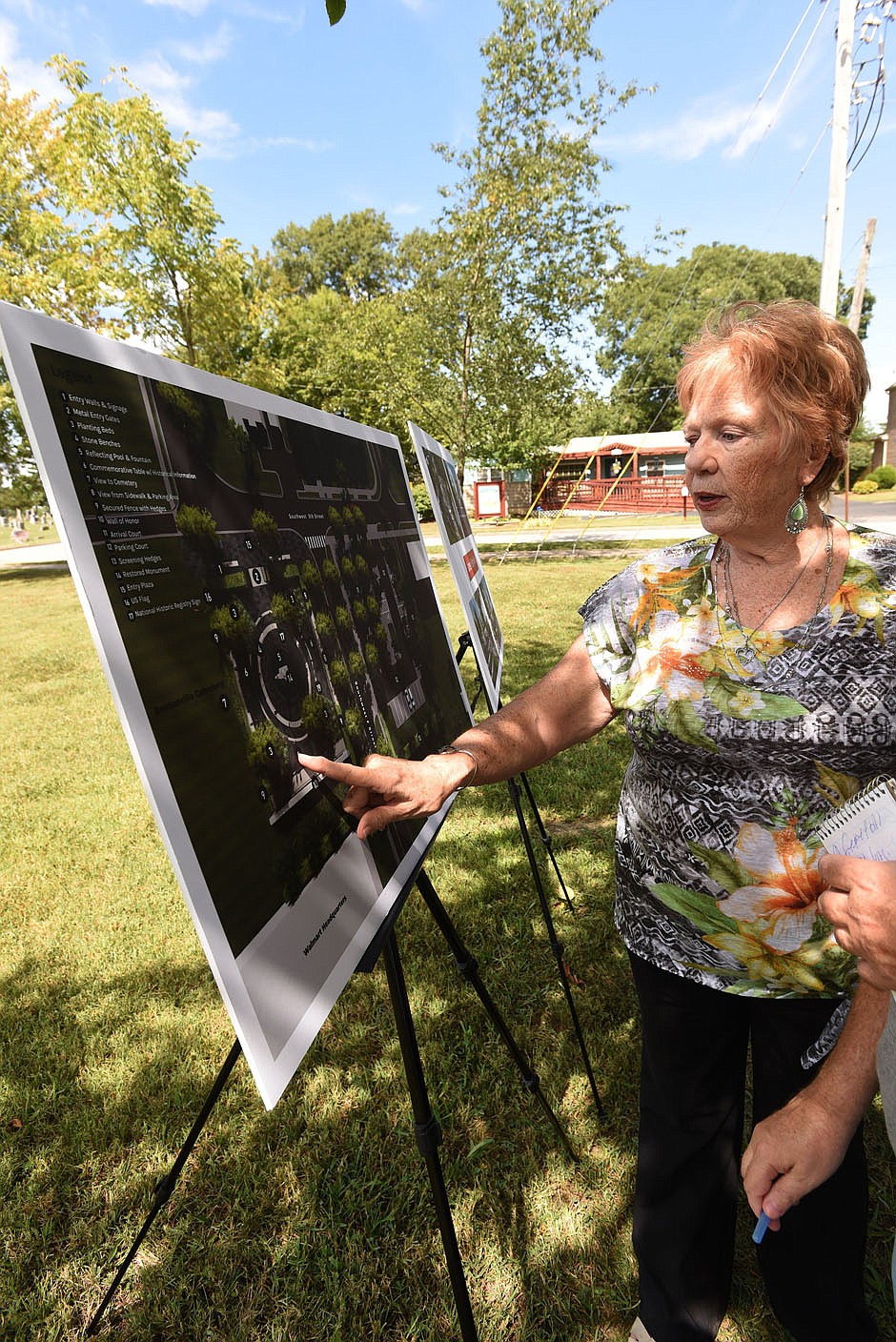