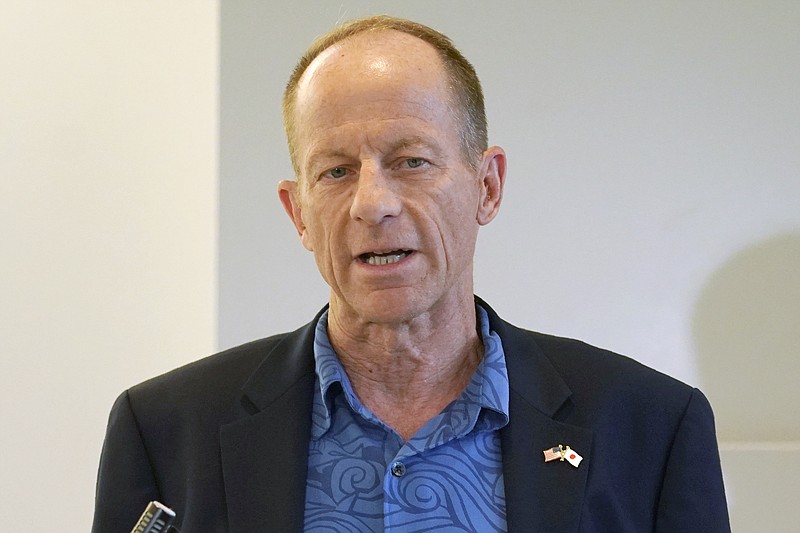 FILE - In this July 11, 2019, file photo, U.S. Assistant Secretary of State for East Asian and Pacific Affairs, David Stilwell speaks to media as he arrives at the Narita International Airport in Narita, north of Tokyo. Stilwell accused China on Tuesday of bullying and insincerity in its dealings with Southeast Asian nations, but said Washington isn't forcing the region to choose sides between the two world powers. (AP Photo/Eugene Hoshiko, File)

HONG KONG -- Hong Kong leader Carrie Lam said Tuesday that Taiwan has not disclosed information about the reported detentions of five Hong Kongers who may have attempted to flee there by boat to escape possible prosecution at home under a tough new national security law.

The Hong Kong government reached out to Taiwan on Monday but has yet to receive a reply, Lam told reporters before a weekly meeting with advisers.

Taiwan media have reported that authorities have been holding five people since last month after they were found at sea. The reports say they had taken part in Hong Kong pro-democracy protests last year. Taiwan has not confirmed the detentions.

Taiwan's Mainland Affairs Council, which also deals with Hong Kong and Macao affairs, said in a statement Tuesday that it will not comment on specific cases, and that it is looking into the inquiries from the Hong Kong government.

Another group of 12 people from Hong Kong, also reportedly headed to Taiwan by boat, is being detained in China after they were stopped by its coast guard in Chinese waters on Aug. 23 for illegal border crossing.

The police in Shenzhen, a mainland city bordering Hong Kong, did not indicate which border they were accused of crossing. Though Hong Kong is part of China, it has a separate immigration system and there are border controls between it and the mainland.

Lam said Tuesday that those caught breaching the laws of another jurisdiction will be subject to criminal sanctions and investigation by its law enforcement authorities.

In July, Taiwan opened an office to help Hong Kong residents who wish to emigrate. However, those seeking to enter Taiwan must apply for a permit before entry because of the coronavirus pandemic.