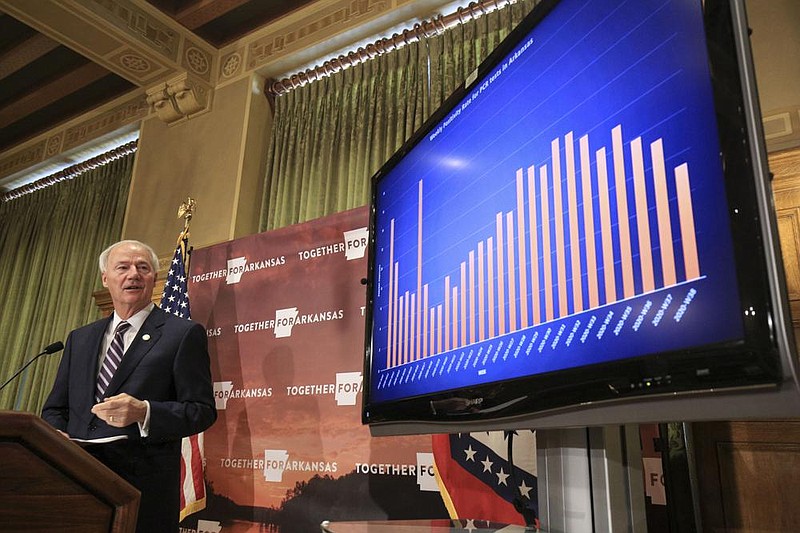 Arkansas' count of deaths from the coronavirus soared above 1,000 on Tuesday as Gov. Asa Hutchinson announced that the state would add 139 deaths among "probable" cases to the total.

Not including those 139 fatal cases, the count of confirmed or probable virus cases rose by 730, ending a three-day run of declining new-case numbers after the record 1,180 added on Friday.

Mike Cima, the state Department of Health's chief epidemiologist and associate director for science, said most of the 139 deaths among probable cases were of people whose death certificates listed covid-19 as a contributing or underlying cause of death even though they were never tested.

People who test positive through antigen tests, which are quicker but less sensitive than the molecular tests used to establish confirmed cases, also are considered probable cases.

Information wasn't available Tuesday on when the 139 deaths occurred.

The state also added one other death of a probable case and 17 deaths among confirmed cases to its totals Tuesday.

[Video not showing up above? Click here to view » https://www.youtube.com/watch?v=cwNdjqNBBug]

That raised the overall count of virus deaths to 1,149, including 1,003 among confirmed cases and 146 among probable cases.

Although the death toll has been increasing regularly by double digits, the governor noted that some of the deaths that are added each day happened weeks or months earlier but weren't immediately reported.

"We're concerned about every death, but I don't see that that's accelerating, but it's just simply that we are really accounting for deaths that have come in previously," Hutchinson said.

When examined according to date of death, rather than the date the deaths was reported, Cima said the number of virus deaths in Arkansas each day "has been fairly linear."

"We have not seen any exponential growths," he said.

Health Department spokeswoman Danyelle McNeill said the state has been averaging about six deaths a day.

Of the 17 deaths among confirmed cases that were added to the state's total Tuesday, six happened more than three weeks ago but weren't immediately reported, Health Secretary Jose Romero said.

However, information on the 139 deaths among probable cases hadn't been added to the dashboard as of Tuesday evening.

The dashboard did show an increase of 676 confirmed cases and 54 probable cases compared with the previous day's totals.

That reflected the 18 deaths that were added to the site's totals and 741 Arkansans who were newly classified as having recovered.

The number of patients on ventilators fell by eight, to 68, but the number who have ever been on a ventilator increased by three, to 606.

Stephanie Williams, the Health Department's chief of staff, said the kits are the first shipment the state has received out of a $4 million order Hutchinson announced last week that the state would make through a purchasing coalition with other states that will ultimately provide enough kits to test 120,000 Arkansans.

The state previously ordered enough kits to process 3,600 tests, but received only a third of them after the federal government "commandeered" the rest of the order, Williams has said.

As a result, only 37 of the 200 machines had been placed in the Health Department's health units around the state.

With the new kits, she said the department will distribute machines to every health unit, along with a second machine for the units in Washington, Benton, Craighead and Jefferson counties.

Critical access hospitals and other small rural hospitals also will be offered a machine.

The Health Department will focus its use of the machines, which return results in about 15 minutes, on elementary and secondary schools, colleges and universities, Hutchinson said.

"The beauty of it is it's simple, it does not take a great deal of time and it is quick point of care," he said, holding up one of the machines.

Deputy Education Commissioner Ivy Pfeffer said 39 modifications have been made to on-site instruction at public schools in response to coronavirus cases, including 22 that were ongoing as of Tuesday and eight that were added this week.

In one instance, the Manila School District announced Monday that it would switch to all-virtual instruction for grades seven through 12 for the rest of the week, starting Tuesday.

"We had a few students test positive over the weekend and today," the district said on its Facebook page.

"That resulted in quite a few students and staff being quarantined for close contact. Currently, we have 99 quarantined before the numbers come in for the positive case today. That number is expected to increase considerably after all of the tracing is completed."

The district said the move would result in 494 students learning from home.

Pocahontas High School, meanwhile, shifted to all-virtual instruction for grades 10-12 for Tuesday and today because of "students and staff members testing positive for COVID-19," Superintendent Jerry Martens said in a message on the Pocahontas School District website.

He said the move was a "precautionary measure" and would allow the district "to deep clean and disinfect the high school."

The Little Rock School District reported three virus cases -- one employee each at Central and Southwest high schools and one student at Hall High -- in the 24 hours ending at 3 p.m. Tuesday.

The district also reported 16 students and seven employees were quarantined for exposure or symptoms during the same time frame.

After a decrease in active cases at the University of Arkansas, Fayetteville, a spokesman said the temporary suspension of on-campus events will likely end Friday.

"While we continue to closely monitor the situation, we do not expect the suspension to be extended," UA spokesman Mark Rushing said in an email.

The campus never stopped in-person classes, though a majority are being taught remotely.

But a surge in cases before the Labor Day holiday led to a temporary suspension of events that began Sept. 5. The first day of fall semester classes was Aug. 24.

The university on Monday reported 334 active cases, including 329 students. The next campus case update is expected today.

More than a half-dozen UA fraternal organizations earlier this month received letters advising them that five or more members had tested positive for the virus.

Letters released Tuesday to the Arkansas Democrat-Gazette under the state's public-disclosure law show that Sept. 1-5 -- a time period that overlapped with the reporting of more than 800 new cases tied to the campus -- four sororities and three fraternities received the letters.

On Sept. 4, Dr. Naveen Patil, the medical director for infectious disease at the Health Department, said "almost 500 cases associated with the University of Arkansas at Fayetteville are associated in some form with sororities or fraternities and those kind of close settings." Patil spoke at a virtual campus event discussing covid-19.

Matt Mills, UA's emergency manager, in the letters "strongly" recommended that all in-person activities be immediately suspended "until the positive cases have been cleared or for the next 14 days, whichever comes first."

Other recommendations included increased cleaning and sanitation protocols, and a prohibition on house visitors. The letters also encouraged members to be tested.

The Tuesday announcement by Hutchinson of 12,000 test kits acquired for antigen testing means that UA's on-campus medical center could soon be offering those types of tests regularly, but Rushing said it "all depends on when the testing kits arrive."

He said the health center is able to conduct approximately 500-700 tests per week.

Arkansas State University announced Tuesday the postponement of Saturday's scheduled football game with the University of Central Arkansas, citing a lack of players available for an unspecified "position group." The Jonesboro campus did not release team information regarding covid-19.

The campus as a whole had the second-most virus cases out of all colleges and universities in the state, according to a Monday report from the state Department of Health.

Totals reported by institutions differ from those in Health Department reports, but ASU on Tuesday reported 180 active cases, down from the 187 active cases it reported Monday on its website.

Health Department officials have said there can be a delay in when they receive information of positive cases, contributing to differences in totals reported by the state and what institutions report. UA students self-report to the university any positive results from off-campus testing.

The count of confirmed and probable cases listed on the state's online dashboard on Tuesday rose by 136 in Washington County; 89 in Pulaski County; 61 in Benton County; and 50 in Faulkner County.

Meanwhile, the University of Arkansas for Medical Sciences' Fay W. Boozman College of Public Health released updated projections predicting a greater number of Arkansans will be hospitalized at the pandemic's peak in the state, compared with what researchers had forecast two weeks earlier.

The latest projections predict that active infections will peak at 83,605 on Dec. 23 under a moderate scenario or 122,267 on Dec. 14 under a worst-case scenario.

Those numbers include infections predicted to be confirmed through tests, as well as undetected infections of people who don't show symptoms and others who are infected but don't get tested.

The latest forecast predicts that hospitalizations will peak at 2,090 under a moderate scenario, up from 1,972 in the earlier report.

The predicted peak of Arkansans in intensive-care units in that scenario rose from 788 to 836, while the number predicted to be on ventilators rose from 315 to 334.

"Since the last report, the model's assumption regarding the likelihood of transmission has been adjusted upward to better account for the impact of schools reopening," the report says.

"The result is a minor increase in the predicted peak when compared with the previous report."

Another model in the forecast report predicts that the state's cumulative count of confirmed cases will reach 121,062 by Oct. 31, with the count of virus deaths rising to 2,088.