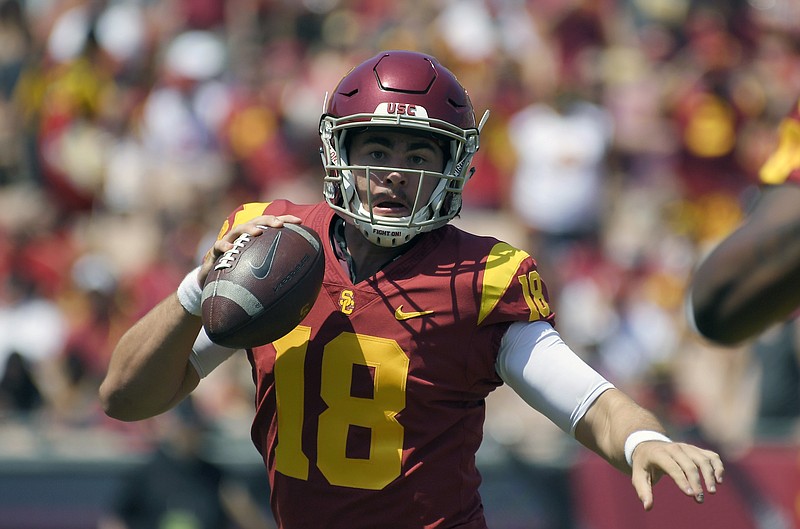 FILE - In this Sept. 1, 2018, file photo, then-Southern California quarterback Jt Daniels scrambles with the ball during the first half of an NCAA college football game against UNLV in Los Angeles. Two transfers, Jamie Newman, from Wake Forest, and JT Daniels, from Southern Cal, are names to watch in Georgia’s five-player quarterback competition. Newman may be the favorite as practice started Monday because Daniels is still recovering from a knee injury at USC. (AP Photo/Mark J. Terrill, File)

ATLANTA -- Georgia still hasn't decided on a new starting quarterback, and Coach Kirby Smart said Tuesday he will likely wait until the season opener Arkansas to reveal who earned the job.

JT Daniels, a transfer from Southern Cal who was granted permission by the NCAA to play right away, is the most notable contender to take over for three-year starter Jake Fromm.

But Daniels has yet to be fully cleared from a season-ending knee injury suffered in 2019. Redshirt freshman D'Wan Mathis put on an impressive showing with the first team during a scrimmage last weekend at Sanford Stadium, leading to speculation that he's got the upper hand for the starting spot.

"As far as I can tell, it's probably going to be a game-time decision," Smart said.

The No. 4 Bulldogs open the season Sept. 26 at the University of Arkansas.

Smart is used to this sort of quandary. In his first season at Georgia in 2016, senior Grayson Lambert started the opener but freshman Jacob Eason came in early, got the start the next week and held the job the rest of the season.

In 2017, Eason started the opener but was injured, clearing the way for Fromm to take over the job. He led the Bulldogs to the national championship game, prompting Eason to transfer to Washington.

That didn't end the quarterback debate. Georgia landed another highly rated recruit, Justin Fields, who got some playing time in 2018 but never beat out Fromm. Fields moved on to Ohio State, where he put up much better numbers than Fromm while leading the Buckeyes to the 2019 College Football Playoff.

Now, the Bulldogs have another QB battle on their hands -- one that took an unexpected twist two weeks ago when transfer Jamie Newman, who started last year at Wake Forest, opted out of the season because of coronavirus.

"It's not a problem for me," Smart said. "It's getting to be the norm around here. We've had it before. It's not a concern among the staff or the organization or the kids. We talk a lot with the kids about it to make sure they understand where we are."

Mathis went through a scary ordeal after enrolling at Georgia, requiring brain surgery to remove a cyst. He returned to the scout team late last season and is fully recovered.

"I remember going to see him in the hospital. All his family members were there. It was a scary, scary moment," Smart said. "But he pushed through that."

Daniels tore up a knee in the opener of his sophomore season with the Trojans, and Smart revealed that he also needed follow-up surgery late in the year to clean up some additional issues. He is able to practice but can't have any contact.

"JT is not completely cleared yet," Smart said. "If we didn't think he would be cleared [for the opener], we wouldn't be practicing him."

Daniels is by far the most experienced of the four quarterbacks on the roster. He was only the second quarterback in Southern Cal history to start the opener as a true freshman and went on to pass for 2,672 yards with 14 touchdowns and 10 interceptions in 2018.

Mathis has never played in a college game. Neither has freshman Carson Beck.

Junior Stetson Bennett played a handful of snaps last season in a mop-up role behind Fromm, but it looks like the starting job is down to a two-man race between Mathis and Daniels.