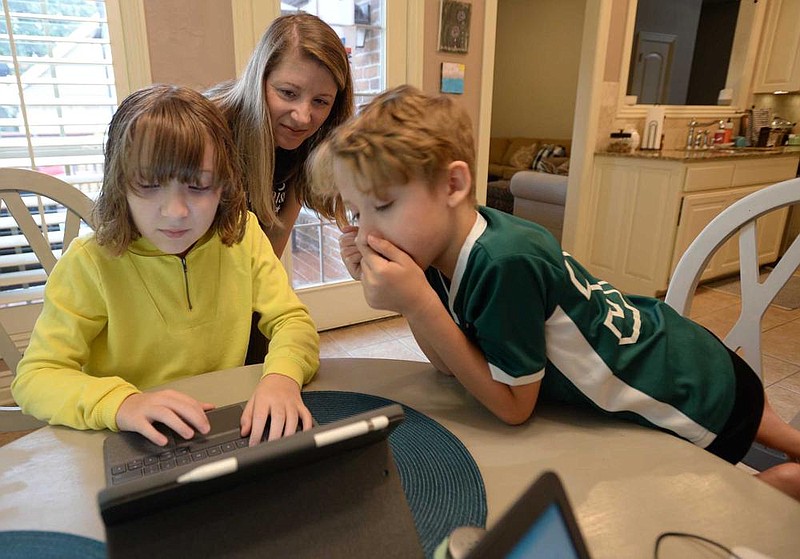 Katie Presley, 11, completes a school lesson on her laptop Thursday as her mother, Jacqueline Presley, and brother, Jackson, 9, watch her work at their dining room table in their home in Springdale. Both children are enrolled in the Springdale School District’s Virtual Innovation Academy in the Don Tyson School of Innovation. More photos at arkansasonline.com/913education/. (NWA Democrat-Gazette/Andy Shupe)

The state's Charter Authorizing Panel on Tuesday gave preliminary approval to Arkansas Virtual Academy to increase its enrollment cap by 1,500, from 4,000 to 5,500 students in kindergarten through 12th grades.

The proposal from the statewide charter school is now subject to review and final approval by the Arkansas Board of Education, which could act on the matter as soon as next month.

The Virtual Academy request is the second for an enrollment cap change for this school year.

The school asked for and received approval from both the panel and the Education Board earlier this summer for an increase from 3,000 to 4,000 students.

Amy Johnson, head of school for Virtual Academy, told the authorizing panel Tuesday that the latest enrollment expansion "is needed to house the extra interest that is coming because of covid."

The school's enrollment has reached its 4,000-student cap, Johnson said. There are an additional 915 student applications that are in process. Another 112 students are on the school's waiting list.

"We still see consistent interest from families for a variety of reasons," she said. "We see the reasons of normal interest -- maybe there is a medical issue or maybe their current situation isn't working out for them. We also see an uptick of students who have had covid themselves, or maybe their families are experiencing the illness or maybe the school where they are is just pivoting in a way that isn't conducive to their learning -- the zig and zag of the delivery is a struggle for them.

"We hear all types of reasons from our families," she said.

Johnson said the 1,500 request exceeds the applications in process and the waiting list but the larger number will provide a cushion or runway "because we can't predict what's going to happen. We are not sure how this virus is going to twist and turn, what schools are going to need and what students are going to need."

The school is based in Little Rock and has students in all 75 counties with concentrations of students in the most populous regions of the state. The school provides students with computers and printers. Teachers provide instruction but parents or grandparents in the home serve as learning coaches for their students.

Regarding the operation of the school, Johnson offered assurances to the panel that it has adjusted to the 1,000 new students already enrolled as the result of the initial cap change from 3,000 to 4,000. The system has added 40 staff members who have gone through training and are paired with the school's veteran teachers.

The Charter Authorizing Panel was scheduled to consider Tuesday the charter application for the proposed Arkansas AgSTEM Academy. The panel had tabled the proposal at an earlier session.

Planners of the school that would have been in Weiner, which is within the boundaries of the Harrisburg School District, withdrew the application before Tuesday's panel meeting.

Deborah Coffman, assistant commissioner for school accountability, chairs the charter panel whose members include a mix of state employees and interested residents.