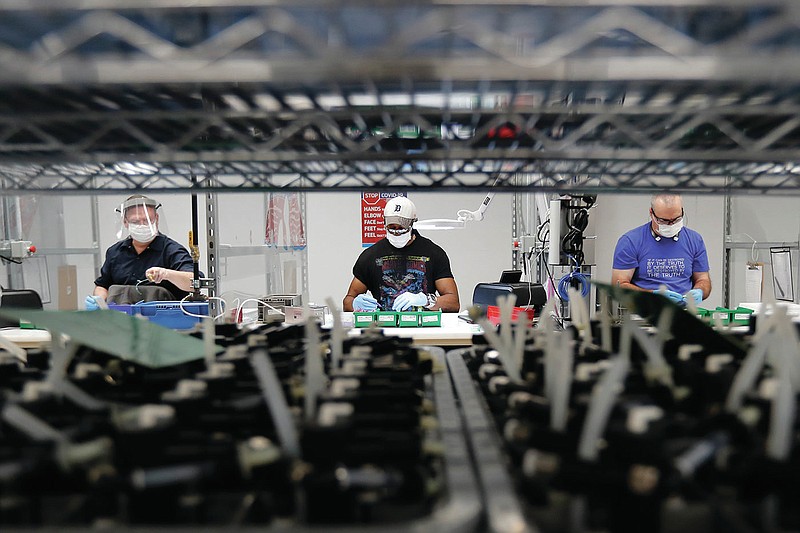 In May, autoworkers were assembling ventilators at a Ford Motor Co. plant in Ypsilanti Township, Mich., during efforts to ramp up production of the crucial machines. (AP)

WASHINGTON -- U.S. industrial production rose in August by less than forecast, signaling a more moderate pace of progress for factories, mines and and utilities as the economy recovers from pandemic-related shutdowns earlier this year.

The 0.4% increase last month was far weaker than the strong bounce back recorded in previous months when factories were coming back to life.

The slight uptick followed gains of 3.5% in July and 6.1% in June, when the industrial sector that had been knocked down by the pandemic began to rebound.

For August, manufacturing rose 1%, but mining, which includes oil and gas exploration, fell 2.5%, the Federal Reserve reported Tuesday. Production at the nation's utilities was off 0.4%.

It's the fourth consecutive monthly increase after covid-19 sent production plunging in March and April. But even with the gains over the summer, industrial production remains 7.3% below where it was in February, right before economic activity seized up in the pandemic.

Manufacturing last month was clipped by a 3.7% decline in output at auto factories, though there were broad-based increases in industries that make other types of durable goods.

Output at aerospace companies rose 4.2% but remained far below its pre-pandemic level. Paul Ashworth, chief U.S. economist at Capital Economics, said that reflects ongoing problems at Boeing and the collapse of the global travel industry.

Economists said the industrial sector should improve further but a number of risks remain.

Declines in the mining sector reflected sharp but temporary drops in oil and gas drilling when Tropical Storm Marco and Hurricane Laura forced energy companies to shutter operations in and around the Gulf of Mexico.

The Fed's report showed that total capacity utilization, including factories, mines and utilities, edged up to 71.4% from July's 71.1%, 8 percentage points below its long-run average and well below the 76.9% seen in February.

Unused capacity weighs on corporate profits because capital is underutilized. It also signals that business investment in new equipment will remain depressed, which could weigh on economic growth. Further, employment in the manufacturing sector remains far below pre-pandemic levels.

While industrial output in the previous two months posted the sharpest gains since 1959, the burst of production is tapering off as the Fed's index remains well below pre-lockdown levels. Nonetheless, manufacturing should continue to benefit from lean inventories, steady domestic sales and a pickup in overseas demand.

Information for this article was contributed by Martin Crutsinger of The Associated Press and by Olivia Rockeman of Bloomberg News.