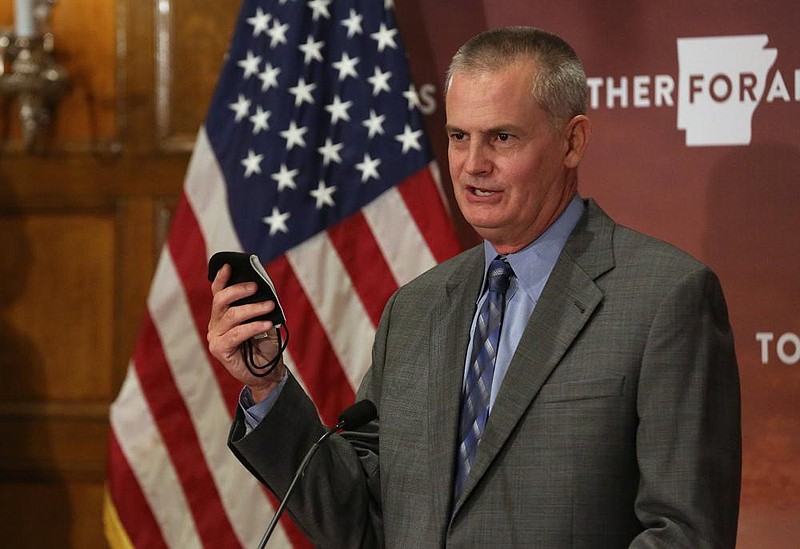 Lance Taylor, executive director of the Arkansas Activities Association, holds up a mask and says "This is the key making it through the fall with high school sports" during the daily covid-19 press briefing on Friday, Aug. 14, 2020, at the state Capitol in Little Rock. See more photos at www.arkansasonline.com/815briefing/ (Arkansas Democrat-Gazette/Thomas Metthe) - Photo by Thomas Metthe

The pandemic, in which Arkansas had its first case in March, rages on, but football teams across the state are playing along with volleyball, cross country, golf and tennis.

As of Tuesday, there were 17 known football games that have been affected by covid-19. Of those 17 games, two that were scheduled for Friday have been affected: Blytheville at Riverview and Crossett at McGehee.

Taylor said he isn't surprised there have been cancellations. It was a topic of discussion this summer when he met with Gov. Asa Hutchinson and the Arkansas Department of Health.

"The governor even said it, 'We're going to have hiccups,' " Taylor said. "The schools have to be overly cautious. We'll work through it."

The games that are canceled have received a "no-contest" designation, meaning there is no winner or loser. That will continue into conference season.

A common theme at high school athletic events this fall is wearing masks and social distancing. Fans are required to wear a mask and keep at least a 6-foot distance if they are not with their families at the games. Most schools in the state have opted to sell tickets during the week and not have game-day sales, with the 66% reduced capacity set by the health department.

It's an ongoing process, but one Taylor said is improving.

"I think it's getting better every week," he said. "The coaches are getting the kids to wear their masks. From early on in the season to now, the fans are doing better.

"It's a new normal for now. I see it getting better."

Taylor said he's attended several games, including Searcy at Cabot on Aug. 28 and the Salt Bowl between Bryant and Benton on Aug. 29 at War Memorial Stadium in Little Rock. One of the things he was looking for at those games was to see how the players and coaches were adhering to the protocols as well as the fans.

When spring sports were postponed in March and eventually canceled in April, it left thousands of athletes in the state in baseball, softball, soccer and track and field without an opportunity to complete their seasons.

As the weeks went by during the summer, Taylor was hoping to avoid a similar situation for fall sports athletes. So far, they're playing.

"We worked with the governor's office and the task force," Taylor said. "These people care about the kids. They care about their health, but more importantly, their mental well-being.

"We wanted to make it as safe as possible. The kids are getting to be kids."

Getting to a point where it was safe to allow students to play their respective sports and participate in their activities was important for Taylor and the AAA.

"I'm happy for the kids," Taylor said. "The players are playing, the coaches are coaching, the cheerleaders are cheering, and the bands are marching."