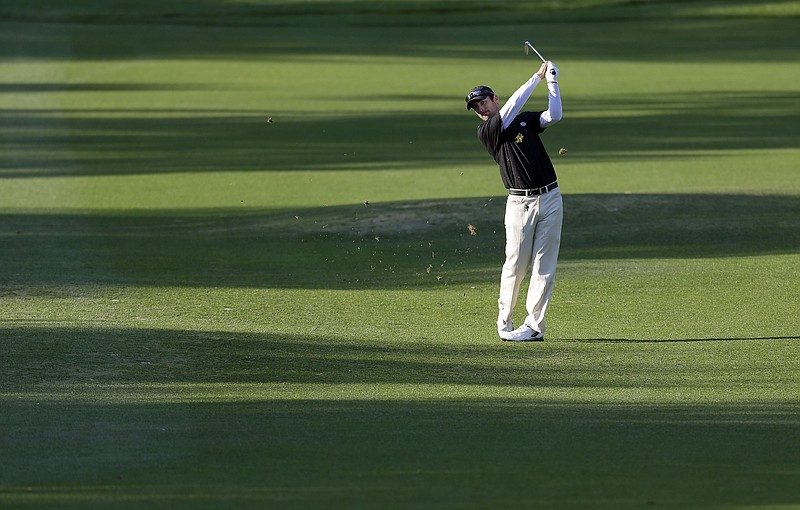 FILE - In this March 14, 2013, file photo, Andy Pope hits from the shadows on the fifth fairway during the first round of the Tampa Bay Championship golf tournament in Palm Harbor, Fla. Pope was among those unable to qualify for the U.S. Open this year because the COVID-19 pandemic led to an all-exempt field for Winged Foot. (AP Photo/Chris O'Meara, File)

If anyone can truly appreciate the meaning of the word "open" at the U.S. Open, it's a 36-year-old father of two who might very well have racked up more frequent flier miles than dollars over his golf career -- a journeyman named Andy Pope.

Since its inception in 1895, the U.S. Open has billed itself as the tournament that anyone could play -- and since 1924, those without an upper-echelon pedigree have had to earn their way into the field through the dozens of qualifying tournaments held each year around the globe.

For four of the past five years, Pope has done just that. He's filled out his entry form, paid his $200 fee and taken the hard road through a qualifying process that included 18 holes of local qualifying, then 36 more holes of sectional qualifying, to emerge from around 9,000 entrants as one of few dozen to take that route to the Open. The reward: Tee times at Chambers Bay, Oakmont, Erin Hills and, last year, Pebble Beach.

"I think I've just been playing good golf but with nowhere to play it," Pope said in describing his situation over the past five years. "And the U.S. Open qualifiers just gave me an opportunity to let my skills show."

He didn't get that chance this year. The coronavirus pandemic forced the USGA to scrap its storied tradition of making its Open truly open to anyone. Traditionally, a little less than half the 156 spots are handed out through qualifying, which was introduced after World War I when the number of entries into the main tournament grew so large that the USGA had to conjure a way to cull the field.

This year, a different challenge. In place of the qualifiers, the USGA set up a more thorough list of exemptions that, while doing its best to make room for lots of little guys and up-and-comers, did not produce a one-and-done pathway for guys like Pope, who thrives under the all-or-nothing pressure of the qualifying format.

"An incredibly difficult decision," John Bodenhamer, senior managing director of championships for the USGA, said of the move away from a process the association has long prided itself on.

It even rolled out a new ad campaign for this year, pre-covid: "From many, one," was the tagline.

It's not to say Pope didn't get his chance. As part of the USGA's bend-over-backward attempt at inclusion, the top five in the Korn Ferry standings have earned spots at Winged Foot this week. The five who finish atop the points list in the tour's season-ending series also makes it. Pope didn't make either list. Not lost on him is that he regained his status on the tour in large part thanks to his performance at Pebble Beach last year, where he made his first U.S. Open cut in four tries. Making it to the weekend allowed him to skip a stage at qualifying school earlier this year, which, in turn, made the quest for full-time status on the Korn Ferry Tour a bit easier.

"In a lot of ways, the USGA helped me get to where I'm at," Pope said.

Because he made it to the weekend at Pebble Beach last year, he was exempt from the local qualifying stage and would've gone right into the 36-hole sectional phase -- which is where he believes he has the biggest advantage.

"Anyone can shoot a great round over 18 holes, but to back that up in the afternoon, it does take a lot," Pope said when asked to explain his success. "I think the grind of 36 holes in one day really does show you who's playing the best."

Unfortunately, that is not the format for most of Pope's competitive rounds. Over the five years since he last had full status on the Korn Ferry, his was a schedule of planes, trains and automobiles -- short stops for Monday qualifiers, interrupted by big games at his home club, the Orange Tree Golf Club in Orlando.

"You've got 47 guys out there, no handicaps, and we're all just grinding it out," he said.

But there's nothing like playing alongside the big boys. After making the cut by two shots at Pebble Beach last year, Pope found himself paired on Saturday with a young up-and-comer named Collin Morikawa. On Sunday at Pebble, it was Pope and Kevin Kisner -- an old buddy from when they were both on what was then known as the Nationwide Tour in 2013.

"It's good to take away from it that I can still compete with these guys," Pope said. "It's encouraging, because at the end of the day, I'm trying hard to get my tour card."