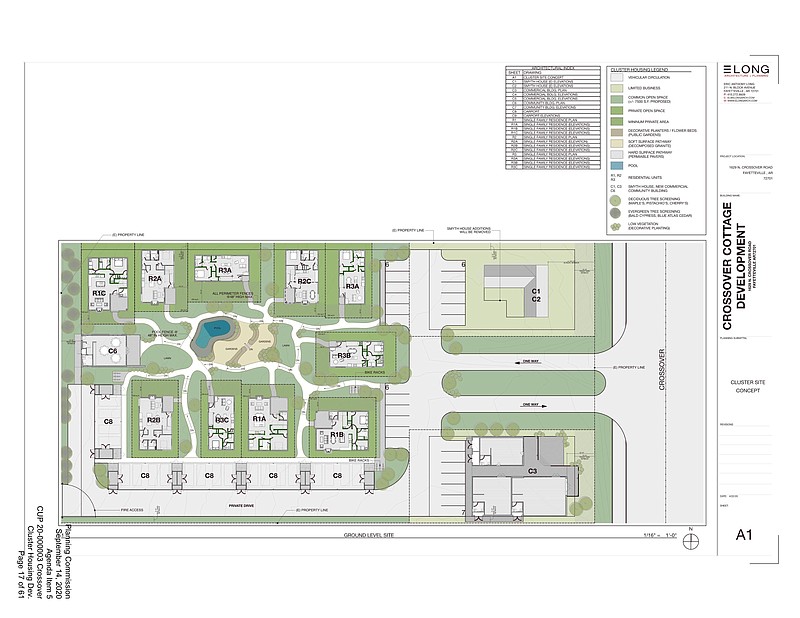 FAYETTEVILLE -- The Planning Commission gave the green light for a cluster of homes and some commercial use associated with a project neighbors said is incompatible with the area.

Commissioners voted 8-1 Monday to approve a permit for cluster homes and limited commercial uses on land west of Crossover Road, about a half-mile south of Mission Boulevard. Jimm Garlock cast the no vote.

The request was for 10 single-family style homes clustered around a shared green space and pool area on the western side of the property. Homes would range about 1,300 to 1,600 square feet. Two buildings with commercial uses would go closer to Crossover Road.

One of those commercial uses would be in the Peter Smyth House, which is on the National Register of Historic Places. The home, built in 1886, has architectural significance.

Richie Lamb with Lamb Development, said giving the building an active use would serve as the best way to ensure its longevity. Leaving the home vacant as it is now would make it more susceptible to deterioration, he said.

The other commercial building would be new, about 3,000 square feet just south of the Smyth house. Development Review Manager Jonathan Curth said a building that size would be limited to an office use under city code.

The commission rejected a rezoning request for the same property two years ago. At the time, the request would have allowed up to an 8,000-square-foot commercial building with homes on all sides and possibly resulted in demolition of the historic home.

The 2018 proposal garnered significant public opposition, as did Monday's request. Several residents, many of whom live in the Boardwalk subdivision nearby, signed a petition asking the commission deny the permit.

Ten residents spoke in opposition to the request, expressing concerns over compatibility, traffic, negative impact to property values, access and drainage. The residents joined the meeting online via the Zoom app.

Matt Robinson, a neighbor on Meandering Way, said having limited businesses behind homes isn't appropriate given the likely addition in traffic. Children also often ride bikes or play on a private drive and parking lot the property owner's association owns, and there likely would be an issue with emergency vehicle access there, he said.

"I would've liked to see all these plans shown beforehand so we could've reviewed them and discussed them with the developer, rather than just sketches," Robinson said.

The commission added requirements regulating lighting at the homes and screening with fencing or vegetation to adjacent property. Matt Hoffman also introduced a requirement that the Smyth house maintain its historic appearance with minimal allowances for maintenance and use.

"I think the developer has done a pretty good job here addressing a lot of the concerns I had last time around," he said. "I think we've got a really good mechanism for preserving the historic home."

In other business, the commission forwarded to the City Council a rezoning associated with the new police headquarters and fire station at Porter Road and Deane Street.

The vote was 6-2. Leslie Belden and Kris Paxton voted against. Hoffman recused.

Voters in 2019 approved a $37 million bond issue to build a police headquarters campus and a fire substation. The zoning for the nearly 12-acre site would change to an institutional district, meant for governmental uses, if approved by the City Council.

Belden said the city should hold itself to a higher development standard than an institutional district, which carries few requirements. Other commissioners disagreed, saying the zoning is appropriate for a civic use.

• Rezoning a half-acre lot on Hendrix Street, southwest of Deane Street and Garland Avenue, from residential single family up to eight units an acre to allowing up to 18 units an acre. The City Council will have the final vote.