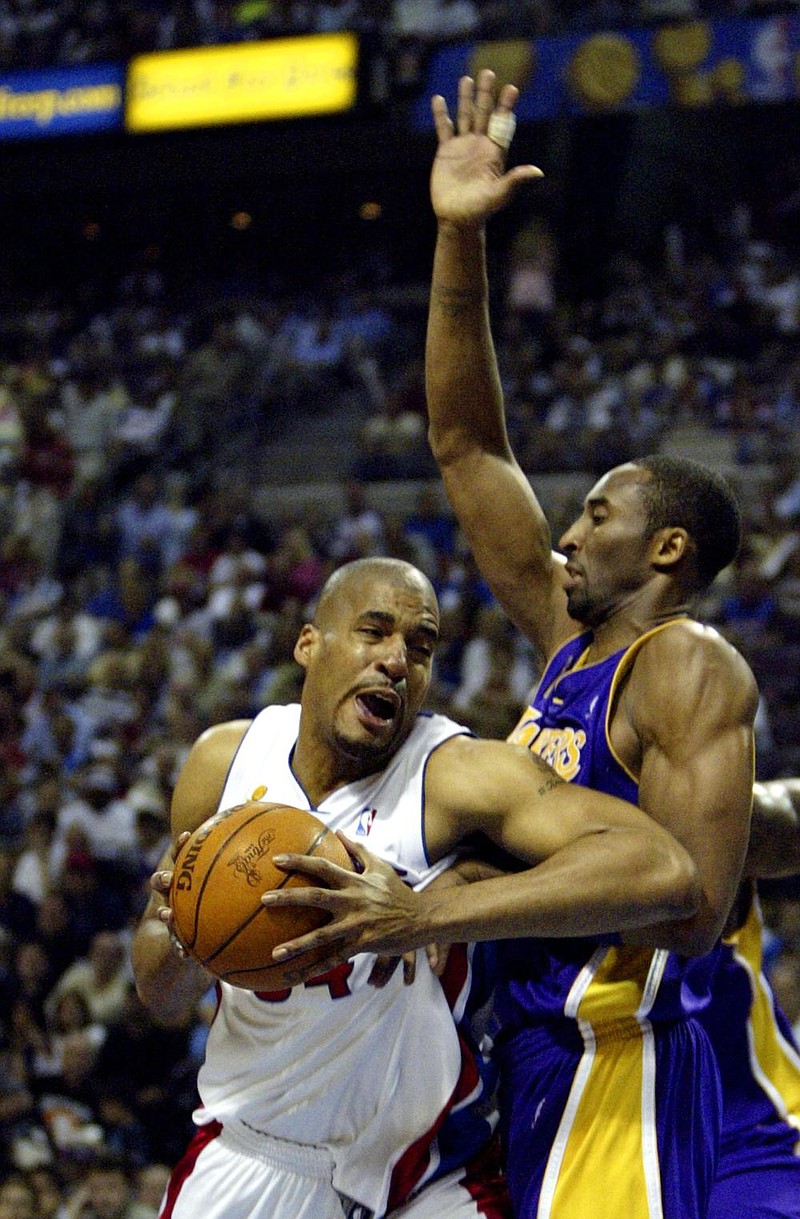 Corliss Williamson (left) of the Detroit Pistons tries to get around Kobe Bryant of the Los Angeles Lakers during Game 5 of the 2004 NBA Finals. Helping the Pistons win the NBA title was the highlight of a 12-year professional career for Williamson, a two-time All-American and SEC Player of the Year who led the University of Arkansas to the 1994 NCAA championship. (AP file photo)

FAYETTEVILLE -- When it comes to players who have won NCAA and NBA championships, Corliss Williamson is in a select group.

That's the math when you take into consideration USA Today reported this year that 46 players won both titles, and there have been about 5,000 NBA players since the league started during the 1949-50 season.

Williamson, a 6-7 forward, was a two-time All-American and SEC Player of the Year who led the University of Arkansas to the 1994 NCAA championship. Ten years later, he played a key role when the Detroit Pistons won the 2004 NBA title.

"I've had people mention before that I was on teams that won both," Williamson said during a recent interview. "But when you put it in that context -- with how many NBA players there have been going back 70 years -- that's a special group to be a part of, for sure.

"It just says that I played with some great teammates and under some great leadership from our coaching staffs at Arkansas and in Detroit.

"You always want to leave your mark on the game as being a winner. That kind of helps solidify you as a winner, being able to be a champion on both levels."

The NBA title was the highlight of Williamson's 12-year pro career in which he averaged 11.1 points and 3.9 rebounds while playing for eight playoff teams.

Nicknamed "The Big Nasty," Williamson's combination of winning, longevity and consistency make the Russellville native No. 4 on the Arkansas Democrat-Gazette's top NBA Razorbacks.

"Corliss is in tremendous company with a Who's Who in basketball," said Nolan Richardson, who was Williamson's coach at Arkansas. "But it doesn't surprise me that he's on a list like that.

"If you go back over the history of Corliss, even as a youngster, he was doing things that caught the eyes of everybody. When I came to Arkansas he was in the seventh grade, and I watched him on TV dunk a basketball at that age. It was incredible.

"All of his background pointed to what he did at Arkansas and in the NBA. He was destined to be the kind of player that he was, and more than that, he was just a born winner."

Williamson, who also played on two AAU national championship teams with the Arkansas Wings, was the Most Outstanding Player of the 1994 Final Four as a sophomore when Arkansas beat Arizona and Duke. He helped the Razorbacks reach the NCAA Tournament title game again in 1995 when they lost to UCLA.

Then Williamson entered the NBA Draft, where he was the No. 13 pick of the first round by the Sacramento Kings.

Back surgery to ease the pain of a bulging disc before Williamson's rookie season limited him to averaging 5.6 points and 11.5 minutes in 51 games.

By Williamson's third season in Sacramento, he was a full-time starter and averaged a career-high 17.7 points along with 5.6 rebounds and 35.7 minutes. He finished second to Alan Henderson in voting for the NBA's most improved player.

The Kings traded Williamson to the Toronto Raptors before the 2000-01 season for Doug Christie, but Toronto wasn't a good spot for Williamson.

"It was crazy that year," he said. "I went from starting in Toronto to not playing at all. I just didn't fit what the coach [Lenny Wilkens] was looking for at that [small forward] position.

"There was a logjam at power forward with Charles Oakley and Antonio Davis, and [Wilkens] wanted more of a perimeter-oriented small forward. That just wasn't my game, so it didn't work out. Sometimes it's like that in the NBA. You can go somewhere and it's not a good fit.

"Then you can get traded or sign somewhere else and all of a sudden it's like your career has been resurrected. That's just the NBA life."

Williamson's career became resurrected in Detroit when he was traded during the 2000-01 season to the Pistons along with Kornel David, Tyrone Corbin and a 2005 first-round draft choice for Jerome Williams and Eric Montross.

In Detroit, Williamson came off the bench instead of starting, but he got consistent playing time.

"The great teams I played on at Arkansas, everybody knew their roles," Williamson said. "The NBA is like that, too, finding your role and then excelling at it. That's what I did with the Pistons."

Williamson's first full season in Detroit he was voted the 2002 NBA Sixth Man of the Year. He averaged 13.6 points, 4.1 rebounds and 1.2 assists in 21.8 minutes while playing 71 of 78 games off the bench with Rick Carlisle as coach.

"I think Rick Carlisle did a great job of recognizing that I was a post-up threat against the small forwards, especially early in transition," Williamson said. "He really milked that a lot during the year I won Sixth Man of the Year. That's why I was able to be successful and kind of found my niche as far as what the team wanted me to bring off the bench."

After going 54-28 in the regular season, the Pistons reached the NBA Finals, where they shocked the heavily favored Los Angeles Lakers to win the series 4-1.

Hamilton, like Richardson, also won an NBA title after winning an NCAA championship at Connecticut in 1999.

"They're both awesome," Williamson said of NCAA and NBA titles. "It's hard to pick one over the other, because on the one hand you have the national championship in college, and we won that at the University of Arkansas and I was from Arkansas. That definitely makes that a very special moment in my life.

"Then when you win an NBA championship like we did in Detroit, you're considered the best team in the world. So I can't pick between the two. It's like A and 1A."

"I used to hate the name 'tweener,' but that's kind of what I was," he said. "I was in between both positions. I think early in my career I was able to play more small forward. But as I got older, I moved more towards power forward."

Darrell Walker, the former Razorbacks All-American guard who is now the University of Arkansas at Little Rock coach, faced Williamson as an NBA head coach with the Raptors and Washington Wizards.

"The Detroit Pistons don't win an NBA championship without Corliss Williamson," Walker said. "I really like and respect Corliss. For a guy to be an undersized power forward, what an unbelievable player he was.

"He was a heck of a guy off the bench the way he could score and be an inside presence. He was a tough matchup for people because of his strength. He was a very physical player."

Richardson said he's not surprised Williamson was able to shift between playing small and power forward in the NBA.

"Corliss had stronger legs than every football player at Arkansas when they tested everybody," Richardson said. "That's where a lot of his power came from. But along with being powerful, he could play with finesse, too. Corliss played up and down the floor a lot better than guys that were supposed to outrun him."

Williamson, a McDonald's All-American at Russellville High School, signed with Arkansas over offers from Georgetown, Indiana and Virginia.

"The best decision I ever made was to stay home and attend the University of Arkansas," he said. "Playing for Coach Richardson was great. Then there was the brotherhood that I had with the guys I played with.

"That time is priceless we spent together in the locker room and in the dorm and then on the planes and in the hotels when we were on the road together. You always have that bond and those friendships to share."

Williamson also played for the Philadelphia 76ers and finished his NBA career back in Sacramento for his final three seasons.

Eric Musselman -- now the Arkansas coach -- was the Kings' coach when Williamson played his final NBA season in 2006-07.

"I liked playing for Muss," Williamson said. "Not that he wasn't a good NBA coach, but I always thought he would be a better college coach.

"It's been exciting seeing how he's reinvented himself as a coach in college. He's found his niche."

Musselman was 110-34 in four seasons at Nevada and led Arkansas to a 20-12 record last season. The Razorbacks have added a top 10 recruiting class and several transfers for this season.

"You look at what Muss has done the past few years, and you can see how he builds his teams and how they compete," Williamson said. "I'm excited to see how things are going to work out this year. I think the program is on the right path."

Williamson was productive his final NBA season, averaging 9.1 points and 3.3 rebounds in 19.1 minutes at age 33. But he decided it was time to retire.

"I thought about continuing to play," Williamson said. "I had some teams that were interested in signing me. One of the teams was Cleveland, so I'm kind of kicking myself in the behind, because I had a chance to play with LeBron James.

"But my oldest son [Chasen] was getting ready to start high school, and I wanted to be back home in Arkansas."

Williamson became an assistant coach at Arkansas Baptist Junior College in Little Rock, then the head coach. That led to him being hired as the head coach at the University of Central Arkansas.

After three seasons at UCA, Williamson returned to the NBA as an assistant coach with Sacramento in 2013. He also was an assistant with the Orlando Magic and Phoenix Suns.

When the Suns coaching staff was fired after the 2018-19 season, Williamson decided it would be best for his family to live in Arkansas full time. He is now a volunteer assistant coach at Little Rock Christian, where his sons Creed and Corliss Jr. attend school.

"We love living in Arkansas, it's home," Williamson said. "It's a perfect situation for our sons before they get ready to leave the nest."

Williamson said that after his sons have graduated from high school, he'd like to get another job coaching in college or the NBA.

"I'm going to wait for God's plan," Williamson said. "See which way he directs me."

Seventh in a series on top NBA Razorbacks.

CORRECTION: Former University of Arkansas basketball player Corliss Williamson is one of 46 players to win both an NCAA and NBA championship, which is about o.9% of basketball players who have played in the NBA. A previous version of this story listed an incorrect percentage.