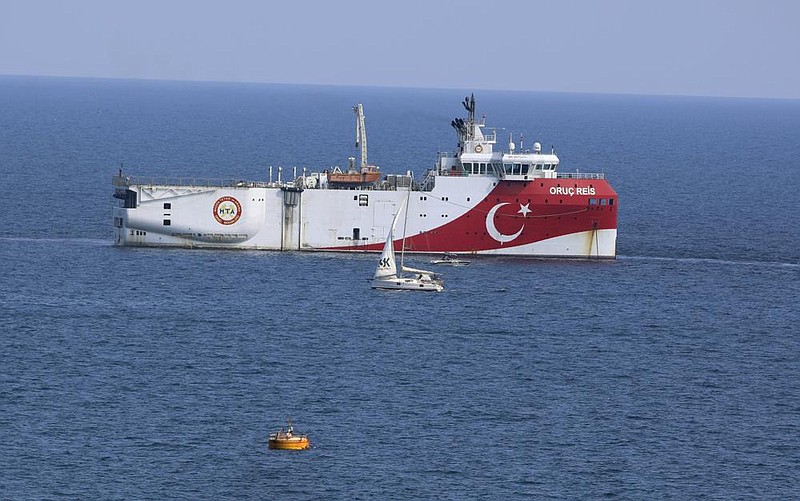 The Turkish research vessel Oruc Reis lies anchored off the coast of Antalya on Sunday where Greek Prime Minister Kyriakos Mit- sotakis welcomed the vessel’s return from a disputed area of the eastern Mediterranean. (AP/Burhan Ozbilici)

ISTANBUL -- Turkey's top diplomat said Monday that a research ship at the center of a diplomatic row with Greece pulled back to shore for maintenance and resupply, but its survey of hydrocarbon resources in the eastern Mediterranean will continue.

Foreign Minister Mevlut Cavusoglu said the Oruc Reis had docked at the southern port of Antalya after weeks at sea. Cavusoglu told private broadcaster NTV that this was incorrectly interpreted as a "retreat" because a new Navtex, or international maritime safety advisory, was not issued.

Turkey's energy ministry, in a statement on Twitter, said the ship's return was "routine" for monthly maintenance and personnel changes.

The foreign minister said he did not expect the European Union to sanction Turkey over the dispute. The EU has said it supports member states Greece and Cyprus, which along with France have called for sanctions. EU officials were drawing up a list of possible sanctions and could decide during a summit Sept. 24-25.

Cavusoglu said the threat of sanctions would only increase Turkey's "determination." Turkey has been involved in EU membership talks since 2005, but progress has been slow.

The lead spokesperson for foreign affairs and security policy at the European Commission said the research vessel's docking doesn't change the EU foreign ministers' message. "The EU needs to see the end of unilateral actions in the eastern Mediterranean, which are being perceived as provocation by some of our EU member states," Peter Stano said.

Israel rarely comments on such reports, but is believed to have carried out scores of raids targeting Iran's military presence in Syria in recent years.

The Britain-based Syrian Observatory for Human Rights said the airstrike hit an area close to the town of Boukamal near the Iraqi border. It said the strikes also destroyed arms depots, and ambulances were seen rushing to the area.

The Observatory said the 10 fighters killed were eight Iraqis and two Syrians. It said the strike is the third this month in Syria's eastern province of Deir el-Zour.

The Observatory gave no further details. There was no comment from Syrian state media.

Israel views Iran as a regional menace and has vowed to prevent any permanent Iranian military buildup in Syria, particularly near the frontier.

CAIRO -- Warring parties in Yemen's yearslong conflict are "severely restricting" the delivery of desperately needed aid as the country slides toward famine amid the coronavirus pandemic, a rights group warned Monday.

Human Rights Watch said international donors slashed their funding in June partly because of the "systemic interference" in relief operations by the Houthi rebels who hold Yemen's capital, Sanaa, as well as by the country's internationally recognized government and their southern separatists.

"Millions of Yemenis depend on the authorities letting aid flow freely for health care and other necessities," said Gerry Simpson of Human Rights Watch.

Yemen is home to the world's worst food crisis, mostly a result of the civil war that pits the Houthis in the north against a Saudi-led coalition and its allies in the south, including separatist forces. The Houthis seized Saana in September 2014. The coalition entered the war in March 2015 on behalf of Yemen's internationally recognized government. 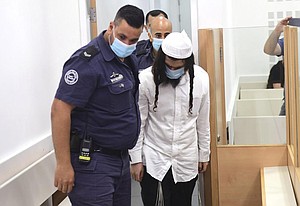 Photo by Maariv POOL
Israeli right-wing activist Amiram Ben-Uliel arrives at a Lod, Is- rael, district court in May for a verdict in the re that killed a Palestinian toddler and his parents. (AP/Avshalom Sassoni)

The New York-based watchdog said the Houthis have denied obstructing aid, saying groups that made the allegations were following "political orders" from the United States.

JERUSALEM -- An Israeli court Monday handed down three life sentences to a Jewish extremist convicted in a 2015 arson attack that killed a Palestinian toddler and his parents.

The Lod District Court found Amiram Ben-Uliel, a Jewish settler, guilty of murder in May for the killing of 18-month-old Ali Dawabsheh by firebombing his home in the West Bank village of Duma.

The court said Ben-Uliel's "actions were meticulously planned, and stemmed from the radical ideology he held, and racism." It said the punishment was "close to the maximum penalty prescribed by the law."

The 2015 arson attack came amid a wave of vigilante attacks on Palestinians in the occupied West Bank by suspected Jewish extremists. The deadly firebombing in Duma touched a particularly sensitive nerve, drawing condemnation from across Israel's political spectrum.