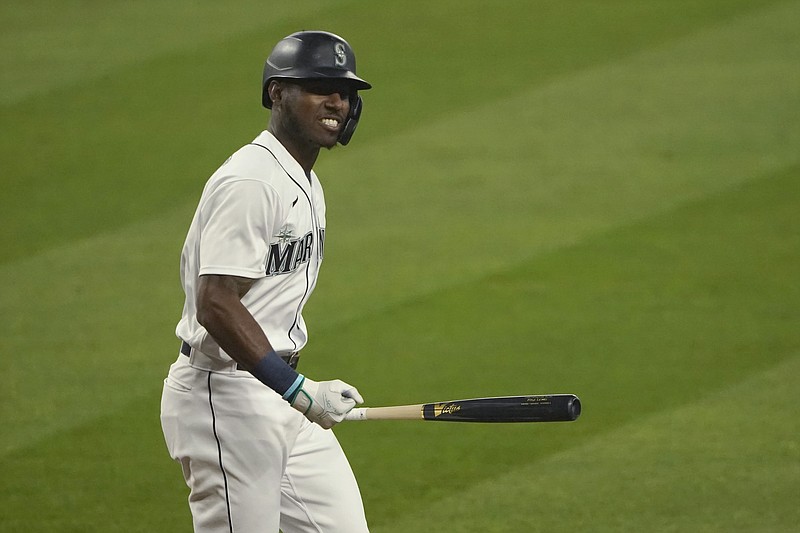 Seattle Mariners' Kyle Lewis pumps his fist after he was walked with the bases loaded in the sixth inning of the first seven-inning baseball game of a doubleheader against the Oakland Athletics, Monday, Sept. 14, 2020, in Seattle. (AP Photo/Ted S. Warren)

SEATTLE -- Former Arkansas Traveler outfield Kyle Lewis sparked Seattle's rally with a two-run home run and walked with the bases loaded in the sixth inning, helping the Mariners top the Oakland Athletics 6-5 on Monday in the opener of a doubleheader.

Mike Minor tossed a two-hitter with eight strikeouts, Jake Lamb doubled and homered in his first game after signing with Oakland, and the Athletics beat the Seattle Mariners 9-0 in the nightcap.

The games were played with a haze of smoke hovering above the field at T-Mobile Park, even with the retractable roof of the stadium closed. Wildfires on the West Coast have suffocated much of the Pacific Northwest with unhealthy air conditions that brought into question whether the games would even be played.

"I'm a healthy 22-year-old. I shouldn't be gasping for air or missing oxygen. I'll leave it at that," Oakland starter Jesus Luzardo said.

Seattle trailed 5-0 after home runs by Sean Murphy and Marcus Semien off Marco Gonzales. But Seattle chipped away and scored twice in the sixth against Oakland's bullpen to move in front for good.

The win pulled Seattle within one game of idle Houston for second place in the AL West.

"There's a lot of good vibes in this clubhouse right now," Seattle Manager Scott Servais said. "It's a lot of fun to be around."

Tim Lopes' third double of the game drove in Phillip Ervin with two outs, tying it at 5. Oakland's Joakim Soria (2-2) struggled with his control and walked three consecutive batters after Lopes' double, the last one on four pitches to Lewis.

"He's pitched with traffic and pitched us out of jams and this time just didn't do it, so this is a tough one for us. This is a game we usually win," Oakland Manager Bob Melvin said.

WHITE SOX 3, TWINS 1 Adam Engel delivered a tiebreaking pinch-hit single in the eighth inning, and the White Sox increased their lead in the AL Central. Chicago opened its pivotal four-game set against Minnesota with its ninth win in 10 games. The White Sox (31-16) moved two games ahead of the second-place Twins (30-19).

PADRES 7, DODGERS 2 Dinelson Lamet outpitched Clayton Kershaw, and rookie Jorge Oña hit a go-ahead double in a five-run seventh inning to lead the San Diego Padres to their eighth consecutive win in the opener of a series between the NL's top teams. The Padres cut the Dodgers' lead in the NL West to 1½ games.

MARLINS 6, PHILLIES 2 Pablo Lopez pitched seven innings of one-run ball with some help from right fielder Matt Joyce, and Miami won Game 7 of its marathon series against Philadelphia. The series, the majors' longest in the regular season in 53 years, included three makeup games and two doubleheaders. The Marlins won five of the seven games, including the final three, to move into second place in the NL East, 1 1/2 games ahead of Philadelphia.

REDS 3-9, PIRATES 1-4 Mike Moustakas hit a big three-run homer in the fifth inning, and the Reds finished a doubleheader sweep. Moustakas drove in Shogo Akiyama and Eugenio Suárez with a two-out shot to center off Nik Turley (0-2). Pittsburgh had just taken a 4-3 lead on rookie Ke'Bryan Hayes' two-run shot with two out in the top half of the inning.

BREWERS 2-2, CARDINALS 1-3 Keston Hiura drove in Avisail Garcia with a sacrifice fly in the eighth inning, giving Milwaukee the win in the opening game of a doubleheader. Paul DeJong knocked in the go-ahead run with a two-out single in the ninth inning as St. Louis salvaged a split of their doubleheader. Monday's doubleheader opened a three-day, five-game series between these NL Central rivals who were facing each other for the first time this season. Counting this doubleheader, the Brewers will play the Cardinals 10 times over their last 16 games.

ORIOLES 14, BRAVES 1 DJ Stewart hit the first of three Baltimore homers in a nine-run third inning, and the Orioles stopped a five-game losing streak. After winning three of four in Washington to extend their NL East lead to a season-high 3 1/2 games, the Braves were handed their most lopsided defeat of the year, enabling second-place Miami to shave a game off the margin.