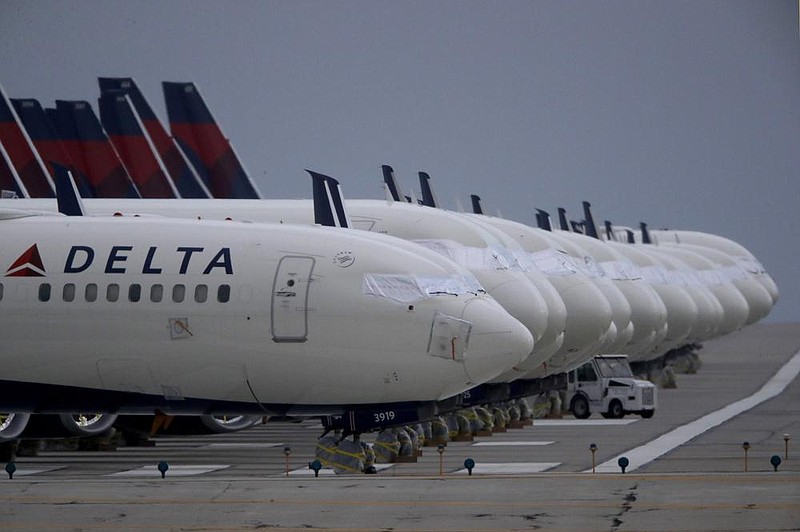 Several dozen mothballed Delta Air Lines jets are parked on a closed runway in May at Kansas City International Airport in Missouri. Delta has announced will use its frequent-flyer program as collateral in a $6.5 billion debt sale. (AP)

NEW YORK -- Delta Air Lines will use its frequent-flyer program to back up $6.5 billion in funding as the pandemic continues to buffet air travel.

A sharp drop in travel has left the airlines with tens of thousands more employees than they need to operate the vastly reduced number of flights. This spring, the airlines began receiving $25 billion in federal grants and loans to keep workers on their payrolls for six months. With that money ending Sept. 30, the three biggest U.S. carriers are expected to furlough or lay off about 40,000 workers.

Delta is only the latest to leverage its frequent flyer program to raise capital. United Airlines and American Airlines did the same in June.

[Video not showing up above? Click here to view » https://www.youtube.com/watch?v=8dh8yCRRrGs]

Airline executives do not expect airline traffic to return to normal for some time, and that is raising pressure on lawmakers to step in and prevent mass job losses.

Last week, about 200 flight attendants and pilots rallied on Capitol Hill and began a social media campaign asking Congress for $25 billion in additional federal funds to prevent the furloughs next month. But the prospects for a big deal suffered a blow Thursday, when Senate Democrats blocked a scaled-back Republican plan. While the GOP bill had no money for transportation, its failure could make major coronavirus relief before the November election less likely.

Delta is raising $4 billion in bonds in two equal portions maturing in five and eight years, with early pricing discussions around 5% and 5.375%, respectively, people with knowledge of the matter said. Goldman Sachs Group Inc., Barclays PLC, JPMorgan Chase & Co. and Morgan Stanley are lead managers on the offering, the people said, asking not to be identified as the details are private.

The airline and its bankers will market the bonds through Sept. 17 and pricing will follow, one of the people said. Delta is raising $2.5 billion in term loans in a deal led by Barclays.

United Airlines sold $6.8 billion of debt in June backed by its MileagePlus frequent-flyer program, and Spirit raised $850 million in a junk-bond sale backed by its plan. American Airlines Group Inc. and Alaska Air Group Inc. also are working to use aspects of their mileage plans as collateral for additional federal loans.

Delta has declined to disclose the value of SkyMiles but said Monday that travel among loyalty plan members has declined along with overall demand.

Total miles redeemed in the first half declined by 78%, reducing revenue from loyalty travel awards by 59%, the carrier said in a regulatory filing. Over the same period, cash from miles sales to American Express Co. fell less than 5% from a year earlier to $1.9 billion from the use of co-branded credit cards. The agreement on the debt offering means Delta won't pursue a second loan from the U.S. Treasury. The carrier had been eligible for about $5.4 billion, an increase from its initial allocation of $4.6 billion.

Southwest Airlines Co. also opted not to seek a second government loan, and other carriers have until Sept. 30 to decide. American Airlines hopes to close its U.S. loan for at least $4.75 billion by the end of this month.

Information for this article was contributed by staff members of The Associated Press and by Mary Schlangenstein of Bloomberg News.