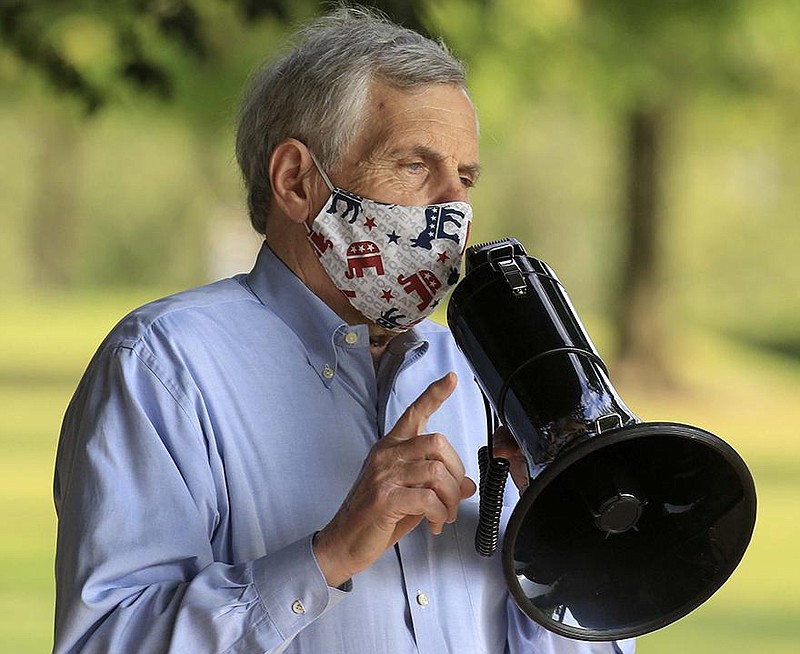 Skip Rutherford, Dean of the University of Arkansas Clinton School of Public Service, teaches his class Wednesday Sept. 9, 2020 in Little Rock in an are outside the school using a mega phone to be heard. Rutherford will retire at the end of the school year. (Arkansas Democrat-Gazette/Staton Breidenthal) - Photo by Staton Breidenthal

Skip Rutherford doesn't know what he's going to do when he retires.

He's too busy trying to steer the Clinton School of Public Service through this unprecedented year.

"Ask me that question closer to June," he said in an email. "Right now, as dean, I just want to get through winter in the middle of a pandemic."

Rutherford, 70, has been dean of the Clinton School since 2006, two years after it was founded by former President Bill Clinton.

"Skip has been a part of the Clinton School of Public Service since it was just an idea to create America's first graduate school for public service," said Clinton. "He supported the mission that students should both study and work on public service projects -- in Arkansas, across the United States and around the world."

As part of the University of Arkansas System, the Clinton School offers two-year master's degree programs in public service -- one on the grounds of the Clinton Presidential Center in Little Rock, and the other online.

Rutherford announced Monday that he will retire at the end of this school year -- June 30, 2021. He actually made the decision back in January. He was going to make the announcement after commencement in May.

But covid-19 was spreading rapidly by then, so Rutherford decided to hold off for a few months.

"There was so much operational uncertainty," he said. "There was so much stress going on among students, faculty and staff that I thought I needed to make sure the Clinton School worked its way through this unprecedented situation, like everyone in higher education is doing."

In his May online commencement address, Rutherford held his grandmother's diary. She had torn out the pages she wrote about death and tragedy during the 1918 flu pandemic. They were just too painful for her to re-read.

"But as awful as that was, the world survived and actually thrived after 1918," Rutherford said in the commencement video. "And we will survive and thrive after 2020. While we can and we should learn from history, we certainly don't have to repeat it."

Rutherford said there are about 90 students currently participating in the on-campus program to some degree, and 32 online students.

"The Clinton School is successfully navigating coronavirus coexistence," Rutherford wrote in his resignation letter to Donald Bobbitt, president of the UA System.

"This is in large part due to a dedicated faculty and staff, the experiences gained following the 2018 introduction of an online degree program, low overhead costs, no long term debt and a successful fall 2020 admission cycle," wrote Rutherford. "Knowing covid-19's repercussions may well extend into the 2021-2022 school year and beyond, this planning is continuing."

Rutherford is only the second dean in the history of the Clinton School. Its first dean was former U.S. Sen. David Pryor.

"It has been personally special being part of the nation's first master of public service program founded by President Clinton and inaugurated by Founding Dean David Pryor," Rutherford wrote in his letter to Bobbitt. "But since higher education is always a work in progress, I also believe the best for the Clinton School is yet to be."

Bobbitt said Rutherford brought a "unique energy and enthusiasm" to his role as dean. He said Rutherford helped establish the Clinton School as a first-class destination for students and faculty interested in "the burgeoning academic discipline of public service." Rutherford amplified the school's reach "by building arguably the best public seminar programs series in the country," said Bobbitt.

"Through the speaker program and growing the impact of the student-led public service projects, his efforts have not only enhanced the educational experience for students, but also established the school as a community and cultural resource for the city and state," said Bobbitt.

A Batesville native, James L. "Skip" Rutherford III is a long-standing figure in Arkansas politics, working as a key adviser on Clinton's 1992 presidential campaign and later serving as president of the Clinton Foundation, according to the Encyclopedia of Arkansas.

After graduating from the University of Arkansas, Fayetteville, where he was editor of the Arkansas Traveler student newspaper, Rutherford took a position as public relations director at McIlroy Bank & Trust in Fayetteville, according to the encyclopedia entry by Griffin Coop of Little Rock.

Rutherford volunteered in 1978 in Pryor's first senatorial campaign. After the election, Rutherford worked from 1979 to 1983 as director of Sen. Pryor's Arkansas office in Little Rock, wrote Coop.

It was in that capacity that Rutherford called Pryor on the night of Sept. 18, 1980, to inform him that the Titan II missile in Damascus was about to explode. Both men are quoted in the documentary film "Command and Control." Rocket fuel ignited, blowing the nuclear warhead out of the silo, but it didn't detonate.

"It was the most terrifying night of my life because you didn't know," Rutherford said Monday.

Rutherford was elected to the Little Rock School Board in 1987 and in 1989 was named chairman of the Democratic Party of Arkansas.

"An ardent supporter of a vital downtown Little Rock, Rutherford's work on the presidential library contributed to a rebirth of activity in Little Rock's long-dormant area that became the River Market District," according to Coop.

Rutherford, who teaches a class at the Clinton School, has been holding lectures outside and tweeting a lot lately about covid-19.

In some tweets, he expressed concern about students returning to crowded campuses.

"Positive percentages remain too high," he tweeted Aug. 30. "Arkansas Health Department is understandably overwhelmed; contact tracing system is too; After only a few days, several colleges and universities are already logistically scrambling with on and off campus covid issues."

When asked if he was critical of large college campuses that have reopened for in-person instruction, Rutherford said: "I'm not so much about criticism as I am about health awareness because one of the things we have seen with this virus, and it's now evidence-based, is that it thrives in congregate or group settings. ... My thing on colleges and universities has been: This is a serious issue that has to be dealt with in terms of spread of this virus."

Rutherford earned a salary of $189,000 during the 2019-20 fiscal year, according to the Arkansas Division of Higher Education. That didn't change this fall because there were no UA system raises, said spokesman Nate Hinkel.

Bobbitt said the UA System will announce details about the search for the next Clinton School dean in the coming weeks.

"I'm grateful to Skip for his years of contribution, and wish him all the best as he plans for his retirement next June," said Clinton.