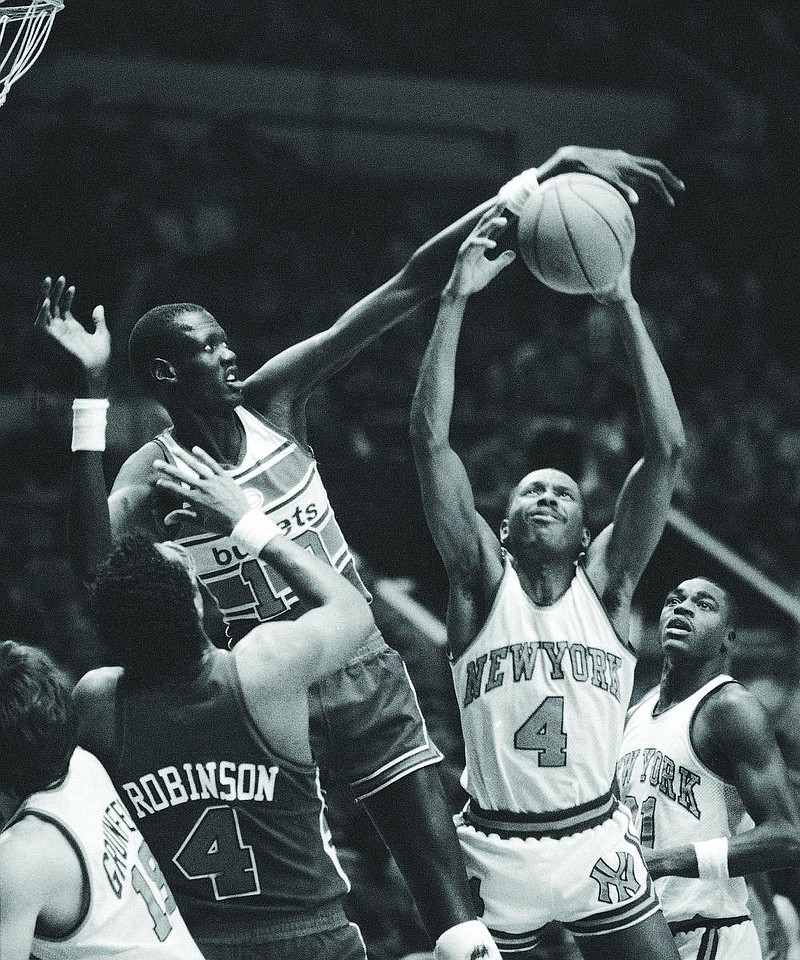 Sixth in a series on top NBA Razorbacks.

FAYETTEVILLE -- When Darrell Walker was cut by the Detroit Pistons on Nov. 24, 1992, he came home to Little Rock.

"I told my wife [Lisa], 'Well, I've got to figure what's next for me in my life,' " Walker said in a recent interview. "About a week later I got a call from Jerry Krause of the Chicago Bulls. What a great phone call."

Krause, Chicago's general manager, called to see if Walker was interested in signing with the Bulls.

"Jerry asked if I'd have an issue coming in and playing on a 10-day contract?" Walker said. "I said, 'Absolutely not.' "

Signing with the Bulls gave Walker -- a 6-4 guard from the University of Arkansas in his 10th NBA season -- the chance to play in his native Chicago and for a two-time defending championship team led by Michael Jordan.

"Jerry wanted some toughness," Walker said. "He wanted a veteran defensive guy to come off the bench and play some minutes if necessary. He was very honest about what my role would be, and I had no problem accepting that role.

"You're talking about being on a team going for a three-peat with one of the greatest players of all-time in Michael Jordan."

The first 10-day contract led to another, and then Walker signed on to stay with the Bulls for the rest of the season.

"It was great to play in front of family and friends in Chicago," said Walker, who is now the head coach for the University of Arkansas at Little Rock. "I grew up watching the Chicago Bulls with Jerry Sloan and Norm Van Lier."

The Bulls won their third consecutive NBA championship in 1993, and Walker went out on top of the world when he retired after the season. His career totals included 720 regular-season games with averages of 8.9 points, 4.6 assists, 4.4 rebounds and 1.5 steals.

For his all-around game, Walker is No. 5 on the Arkansas Democrat-Gazette's list of top NBA Razorbacks.

"I remember we were on the charter plane going to Phoenix," Walker said. "M.J. got on with a little bag and he's smoking a cigar, and he goes, 'Boys, I packed for one day. We're coming back as World Champions tomorrow.'

"That just lifted all the tension off the plane and threw it out the door. It was like, 'The best player in the world just said we're going to win, so it's going to happen.'

"When we won, we were celebrating, jumping up and down and drinking champagne, going crazy. It was just an unbelievable time in my career and my life."

After the season Walker accepted an offer to work for the NBA Players Association.

"I look back on it and think I could have played another two or three years," Walker said. "But going to work for the NBA Players Association was a great move. It kept me around the game."

Walker stayed in the game with the Toronto Raptors, first as an assistant coach, then as their head coach. He was coaching in the CBA with the Rockford (Ill.) Lightning when Jordan – Washington's head of basketball operations – hired him to be interim coach of the Wizards during the 1999-2000 season.

Jordan and Walker became good friends during their brief time as Chicago teammates.

"I think M.J. respected me from playing against him all those years," Walker said. "I was never one of those guys that was terrified of him, and he knew that.

"We always competed hard. [Bulls guard] B.J. Armstrong told me one time when they were coming to play us in Washington, 'M.J. said, 'Man, I've got to deal with this damn Darrell Walker tonight. He's going to be grabbing and scratching and holding me the whole time.'

"To me, that was a compliment that he wasn't excited to play against me. My job was to make it tough for him and make him work for everything he got."

When Walker signed with Chicago, he and Jordan hit it off immediately.

"We just started hanging out together, going to dinner together, having a good time being teammates," Walker said. "M.J. knew I was a guy he could trust, and if you're loyal to him, he's going to be loyal to you."

Along with being an interim coach with the Wizards, Walker also was the team's director of pro personnel and coached Washington's WNBA team, the Mystics.

Walker, an All-American as a senior in 1982-83 who averaged 18.2 points and 5.7 rebounds for Coach Eddie Sutton's Razorbacks, began his pro career when the New York Knicks made him the No. 12 pick in the 1983 NBA Draft.

Hubie Brown, known for his fiery personality, was the Knicks' coach.

"A lot of people have said bad things about Hubie," Walker said when he was drafted by the Knicks. "Sure, he's a tough coach, but Eddie Sutton was a tough coach. It's going to be no problem adjusting to Hubie."

As it turned out, while Walker had some good seasons playing in New York, he also had a problem with Brown that became increasingly worse.

Walker made the NBA all-rookie team when he averaged 7.9 points and 3.5 assists and the Knicks went 47-35 and made the playoffs. The next season Walker averaged a career-high 13.5 points along with 5.0 assists and 3.4 rebounds.

In Walker's third season, he averaged 10.3 points, 4.2 assists and 3.7 rebounds, but he played 466 fewer minutes than the previous year as his feud with Brown continued to grow.

"We didn't like each other," Walker said. "It just didn't work out between us two. I was young and high strung, and Hubie was old school."

Walker figured his time in New York was coming to an end when he and Brown had a heated argument during the 1985-86 season.

"We were in Atlanta, and we got into a nasty exchange, almost came to fisticuffs," Walker said. "I'd had enough, and I let him know that.

"He criticized a pass I made in practice, and when he said what he did to me, I snapped. It was so bad I got suspended for a game."

Brown coached 15 seasons in the ABA and NBA with the Kentucky Colonels, Atlanta Hawks, Knicks and Memphis Grizzlies and also was a television commentator.

"Hubie was a solid coach, and he was great on TV," Walker said. "But the way he talked to players really crossed the line a lot of the time.

"I just got tired of dealing with him. That's the way it is sometimes in professional sports. I got traded and moved on with my career."

In October of 1986 before training camp started, Walker was traded to the Denver Nuggets for a first-round draft pick.

"I never demanded a trade," Walker said. "I loved New York. It reminded me so much of Chicago.

"I missed New York, but I didn't miss Hubie -- at all. It was great to get traded. I felt like if I had stayed in New York, something would have happened between me and Hubie, and it wasn't going to be good."

After Walker averaged 12.2 points and helped the Nuggets make the playoffs in his lone season, he was traded to the Washington Bullets with Mark Alarie for Michael Adams and Jay Vincent.

Walker played four years in Washington and nearly averaged a triple-double during the 1989-90 season at 9.5 points, 8.8 rebounds and 8.0 assists.

"Darrell was the same in the NBA as what you saw from him at Arkansas," said center Joe Kleine, who was Walker's teammate with the Razorbacks and played 15 seasons in the NBA. "He was a tenacious competitor. He played extremely hard all the time.

"He could defend and rebound and score inside so well for a 6-4, skinny guard. He was very effective in his role for a lot of teams."

Washington traded Walker to Detroit before the 1991-92 season for two second-round draft picks.

"I never had a problem with being traded," Walker said. "It's a problem when somebody wants to trade you and nobody else wants you. That's when you have a problem as a player."

Walker played at a time when the NBA game was far more physical than it is now.

"It was a different game back then," he said. "You just didn't come into the lane. If you did, you got hit.

"When you went in for a layup, you didn't expect you were going to get ice cream and then you'd walk back down the court. No. The ice cream was going to be splattered all over your face and you'd be picking yourself up off the court. Nobody took it personal. That's just the way it was.

"You went to the line and tried to make your free throws, and that was it bro."

Sidney Moncrief, an All-American guard at Arkansas at 1978 and 1979, played against Walker in the NBA for seven seasons.

"Darrell got better every year, and he was so smart," Moncrief said. "He had a very high basketball IQ.

"He was just relentless. He was Chicago tough, and he was talented first of all. You don't play as long in the NBA as he did without talent, but he was gritty on top of that. Very few players have that combination."

After Walker's head coaching stints with Toronto and Washington, he stayed in the NBA as an assistant with the New Orleans Hornets, Pistons and Knicks.

Walker was with the Knicks when he returned to Fayetteville in December of 2012 to graduate with an education degree in resource management.

Fittingly, Walker received his diploma in a ceremony at Barnhill Arena, where he helped the Razorbacks to a 32-2 record in his three seasons. Sutton presented him with his diploma.

"It's been a long journey," Walker said at the time. "To graduate in Barnhill Arena, with Coach Sutton, it's like somebody just drew a full circle. It feels good."

Walker said one of the reasons he wanted to finish his degree was to have the option of pursuing a college coaching job.

"It's always been in the back of my mind about coaching in college," Walker said. "I think I could be a good college coach."

After he led Clark to a 45-18 record and two NCAA Tournament appearances, Walker came home to Little Rock to be UALR's coach.

The Trojans were 10-21 in Walker's first season, but improved to 21-10 last year and won the Sun Belt Conference championship. On Friday, UALR announced Walker had received a contract extension through the 2023-24 season.

"It's been so much fun to build this program up to where we have it right now," Walker said. "I'm excited about what we're doing. Little Rock is a great place for me to be coaching."