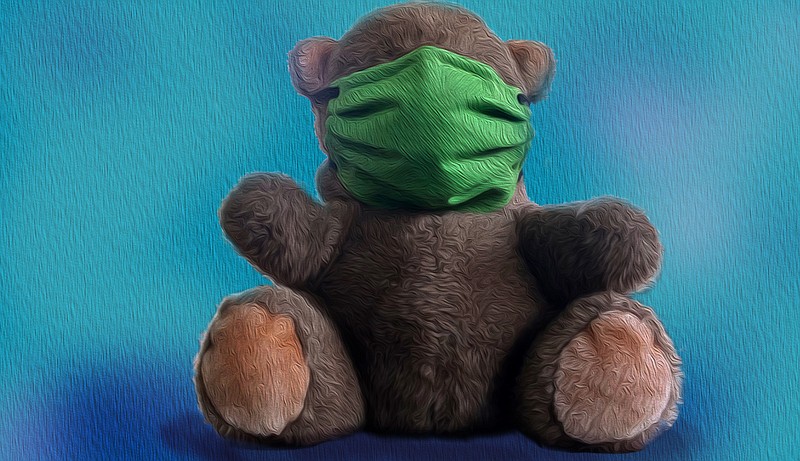 When the elderly man went to see Ohio-based ophthalmologist Darrell White in early May complaining of a burning sensation in his eyes and occasional blurry vision, White knew exactly what he was dealing with: another case of dry-eye syndrome.

What didn't entirely make sense, though, was that White, a dry-eye expert, had been caring for the man for 20 years, and not once had his patient shown any symptoms of the common condition.

Then as White looked at the man, who was wearing a face mask, a familiar pandemic-era accessory, he was hit with a "lightbulb moment."

The sight of the man's steamed-up glasses coupled with his sudden onset of eye dryness are both signs of what White is calling "mask-associated dry eye," or "MADE" — an emerging phenomenon amid the novel coronavirus pandemic that eye experts are now urging the public to be mindful about.

"The real reason for bringing this to people's attention is to say, 'Hey, if you notice this, this is why it's happening and let's help you manage your dry eye while you continue to wear your mask,'" said Lyndon Jones, director of the University of Waterloo's Center for Ocular Research and Education in Canada. "We would hate for people to use this as an excuse to not wear their masks."

Dry eye can cause discomfort, blurred vision and redness, among other symptoms. Between 20% and 25% of people worldwide report dry eye at some point in their lives, and the problem is more likely as we age, Jones said.

But in recent months, some eye-care providers have reported an increase in patients — who wear glasses and those who don't — wondering why their eyes feel drier than usual, especially while wearing masks.

Eye dryness associated with face coverings, which has been the subject of at least one published paper, is probably triggered by air expelled from breathing going out the top of the mask and flowing over the surface of your eyes, according to eye experts we spoke with. The moving air dries out the tear film, a thin layer of fluid covering the eye's surface, and speeds up evaporation.

It is also possible, White said, that the mask aggravates oil glands near the eye, which can lead to tears evaporating more rapidly. He noted, however, that the potential link between mask-wearing and the oil gland inflammation is "not really very well understood," leading experts to point to airflow as a more probable cause.

White described the mask-associated dry eye as an "accelerant" for symptoms, particularly in people who already have the condition or have a higher chance of developing it. One such at-risk group would be people who spend a lot of time staring at screens, White said -- for instance, those of us who have now been working from home for months.

"So many of us now attend a gazillion Zoom meetings a day," said Thomas Steinemann, a clinical spokesman for the American Academy of Ophthalmology. "If not that, we're working on projects that require our intense scrutiny staring at a screen."

Research has shown that when people look at screens they blink less or fail to blink completely, resulting in dry or irritated eyes.

But that uncomfortable feeling is easily avoidable, experts say. Here's what they recommend.

An ill-fitting or poorly made face covering will increase the chances that exhaled air escapes from the top of the mask, says Surendra Basti, a professor of ophthalmology at Northwestern University's Feinberg School of Medicine.

"Ideally, a mask should have a metal strip at the top incorporated in the mask so that you can push it and it takes the contour of your nose and cheekbones," Basti says. That way the top edge of the mask sits flush with your face and more effectively blocks airflow, he says.

Don't wait until your eyes are "screaming," Steinemann says. Pay attention to how your eyes are feeling and be committed to treating the symptoms, he says.

One common way to alleviate dryness is a simple method Steinemann calls "20-20-20."

"Every 20 minutes for 20 seconds, just 20 seconds, give yourself a break and look 20 feet away from the computer," he says.

For mask-related dryness, Steinemann says, briefly taking off the covering is another option when it is safe to.

Over-the-counter artificial tear drops are also effective, Basti says. Eye drops without preservatives, which can irritate the eye, are preferable, he says.

Those drops should not be confused with redness relievers, which eye experts do not recommend, Steinemann says.

"When you put it on the eye, the vessels will shrink, but then the pharmacologic effect wears off," he says, resulting in a rebound effect that can cause "real swollen blood vessels on the white of the eye."

◼️ Resist the urge to rub your eyes.

"The temptation is to close your eyes and rub them, and 99.9% of the time that turns out to be a super-bad idea," White says.

Eye rubbing can lead to a host of problems including micro-abrasions in the cornea and inflammation that makes your eye more swollen, he says.

"Hopefully, the possibility of getting covid will make people do all the right things by not touching their eyes," he says. "Not touching your eyes is good policy every day of the week, every week of the year, every year."

Eye dryness, while annoying, is not going to pose serious problems for a majority of people, Jones says. So don't stop wearing your mask out of concern that it might make your eyes feel dry.

"I wouldn't want people to think, 'Oh my goodness, I can't wear my mask because it's going to produce this terrible situation,'" he says. "That's blowing it way out of proportion."

The benefits of mask-wearing far outweigh the eye discomfort, Basti says. Dry eyes can be managed, and "at least they don't put other people at risk," he says.