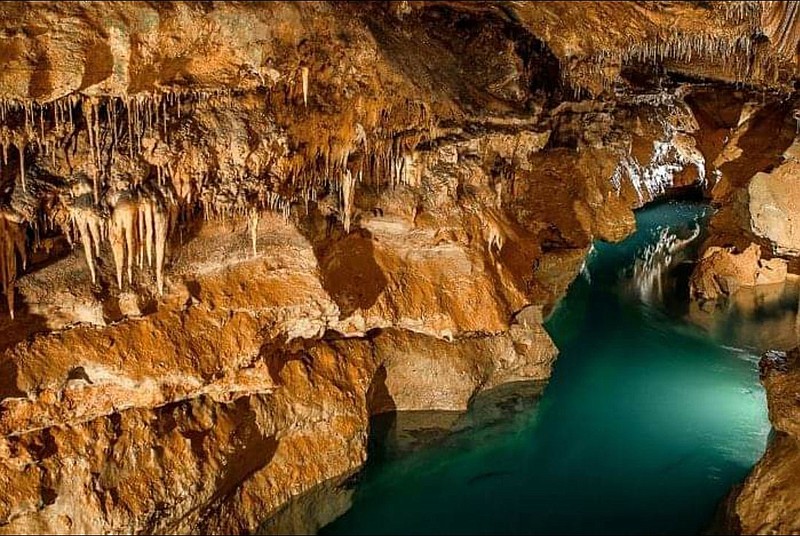 Cosmic Cavern near Berryville includes two mysterious underground lakes, along with all kinds of cave formations created over thousands of years. The first lake, South Lake, has had trout in it for nearly 50 years. Some of the trout have gone blind and most have lost their color, according to the cave’s owner, Randy Langhover. The discovery of the second lake in the “Silent Splendor” section made national news in 1993. (Courtesy Photos)

When you order a birthday cake for a 175th celebration, don't expect it to turn out quite right, says Randy Langhover, the owner of Cosmic Cavern in Berryville. The one he recently got to mark the cave's anniversary came saying "Happy 75th!"

It wasn't really a surprise to Langhover. It's hard to wrap your head around the fact the tour cave was discovered on Sept. 4, 1845. He has owned it only since 1980 -- not long in a life measured in thousands of years.

The cave was first discovered by a miner named John Moore while he and his sons were searching for lead, and they found the first of two mysterious underground lakes. Soon, other people came to "Moore's Cave" -- not for lead but to mine the gemstone onyx near the cave's entrance. It's had many names since then -- Bear Cave, Maple Springs Cave, Joe Johnson Cave at Sycamore Hollow, Majestic Cave, Mystic Cave and Mystery Cave -- before becoming Cosmic Cavern.

Langhover grew up on Table Rock Lake and always wanted to work at Silver Dollar City in Branson. That didn't pan out, he says, so he got a job at Onyx Cave in Eureka Springs, then took over Cosmic Cavern when its owner couldn't keep it open. He says it was a job, it came with a place to live, and he could see a future in it. What he didn't know, he says now, was "you don't own a cave. A cave owns you."

"It always needs pampering," he says, speaking as though the cave were a living thing -- which it is. Like other caves in Arkansas, Cosmic Cavern is made of limestone. Over time, water washes over the rock, and the acid in it eats away the limestone to form hollow underground spaces. As water rich in minerals constantly drips down from the top of the cave, the minerals harden to form stalactites -- which hang from the ceiling -- and stalagmites on the floor, along with ghosts, curly fries, clumps of worms, all actually speleothems, commonly known as cave formations or features. Everything continues to "grow" as the drips continue, but very s-l-o-w-l-y -- less than an inch in 100 years.

During periods of heavy rainfall, the cavern tends to flood heavily, requiring that pampering Langhover spoke about. But then it rewards him in unexpected ways. In 1993, he followed air flow and the sound of a waterfall through a three-inch hole to discover the back of the cave. Immediately opened, it made Cosmic Cavern the first to offer wild cave tours in Arkansas.

Most recently, Langhover has had to figure out how to handle reopening and dealing with social distancing and safety protocols in the time of covid-19. But he's amazed to report that even keeping the cave tours at half-capacity, "this is our busiest year in 23 years. We had one day with almost 300 people! And the wild tours, which we only do three nights a week, are booked up!"

The regular tour, which takes visitors about one third of a mile in 75 minutes, is easy enough for seniors and families, Langhover promises. There are about 60 stairs down and about 30 back up, but the rest is bridges and ramps. The wild tours, which happen after the cave closes and last about 2.5 hours, require significantly more mobility.

"A lot of people have come because we're listed as an outdoor attraction," Langhover says with a laugh. "But we're about as far from that as you can get. Caving is mountain climbing underground!" 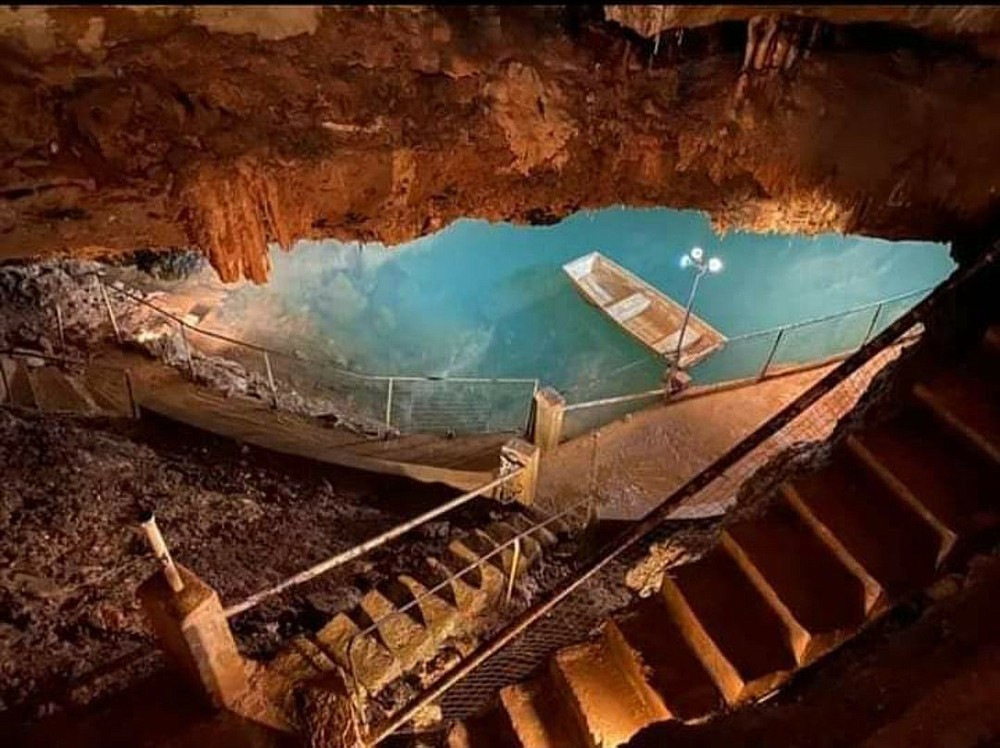 Cosmic Cavern near Berryville includes two mysterious underground lakes, along with all kinds of cave formations created over thousands of years. The first lake, South Lake, has had trout in it for nearly 50 years. Some of the trout have gone blind and most have lost their color, according to the cave’s owner, Randy Langhover. The discovery of the second lake in the “Silent Splendor” section made national news in 1993. (Courtesy Photos)
More News

WHEN — 9 a.m.-5 p.m. daily until Thanksgiving; also open the week of Christmas