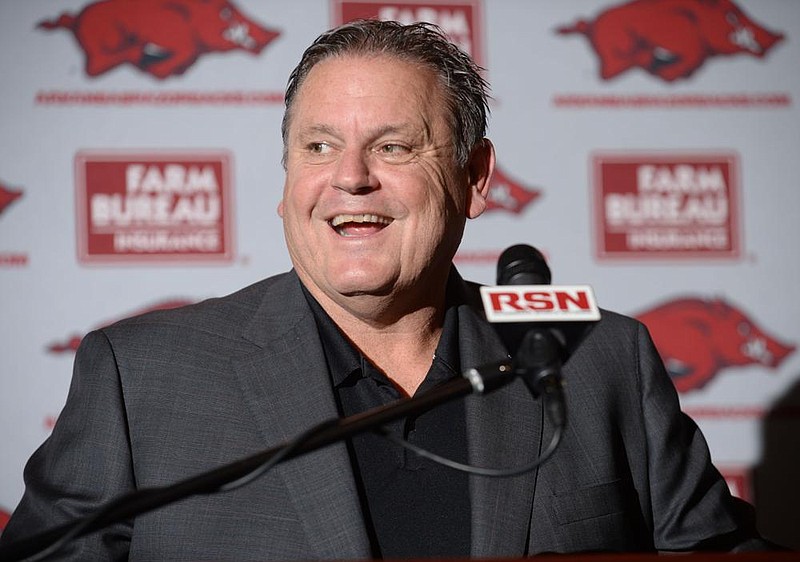 Pittman cracked jokes on himself, a little on his wife Jamie, and showed the dramatic timing of a comedian for parts of the show.

The light-hearted approach started at the show's outset, as host Chuck Barrett, the voice of the Razorbacks, talked about the plexiglass dividers between themselves, and between them and the audience at the Catfish Hole.

"This right here, I used to see this if it's a bad band playing or something, you know?" Pittman said. "And they're shielded by all the stuff being thrown at you. So I thought that's what this was for."

Before the show could get started, Pittman said he wanted to introduce Jamie.

Both comments drew laughter from the crowd, a rarity the past couple of years during the Arkansas coach's radio show.

Pittman even got a laugh out of a goofy line because of the way he delivered it when talking about the connections between coordinator Briles' offense and any other offensive unit.

"Nobody knew the verbiage [yet]," he said. "There were some similarities, obviously. You've got to throw the ball to our guy, you know."

When the laughter died down, Pittman created more by saying, "I mean the completion rate has to be to our people. But anyway, I don't know what I was saying after that."

Later, Pittman used heavy emphasis on the word "big" in this remark, leading to more laughter: "That's where we needed to go on the offensive and defensive line. We needed to get big," he said. "Nobody said ... they don't need to look like me. They need to look big and in shape.

"That's what Jamil [Walker] and his staff have done. I'm sure I'd look like them, but it's been covid, I'm not allowed in the weight room."

The University of Arkansas has not been releasing the results of recent covid-19 testing after reporting no positives in the department in late July, shortly after the start of walk-throughs.

Athletic Director Hunter Yurachek said at the outset of the coronavirus pandemic the school would not release regular updates on positive tests or numbers of personnel in quarantine due to contact tracing in the department, though sources have told the Arkansas Democrat-Gazette there have been some of both in multiple sports, including football.

Pittman noted on his radio show Wednesday the importance of his players doing things right outside the "bubble" of the Smith Football Center.

"Right now, if you're quarantined, you're looking at a 14-day period where, we tested again today, and that takes you all the way to Georgia week," Pittman said. "You'd be out until Wednesday of that week. So the virus is certainly powerful.

"But now it's even more meaningful to our kids because it's a two-week time period out of football. Which they work their entire year, this year, to get 10 games. So I think it's starting to hit us mentally a little bit more about how we have to be better after practice."

Speaking on his radio show Wednesday, Coach Sam Pittman said offensive line coach Brad Davis had gotten six players trained up to the point they could play center in a game, if needed.

"The one thing that we started to have to think about in these covid times is the center position," Pittman said. "Because the center and the quarterback are the only two guys that every play is going to touch the ball. And if you're without a functioning center, you're in trouble.

"So Coach Davis has done an outstanding job. We have six. We have six guys that can get the ball to the quarterback. And that's where, in my opinion, that's where it starts."

Strength and conditioning coach Jamil Walker and his staff put a rush job on trying to add muscle to the Razorbacks, particularly on the front lines.

"When I got here, I didn't know if we would walk out there and look like an SEC football team on the front," Sam Pittman said on his Wednesday radio show. "And you know with Jamil Walker's work and his staff in the weight room and us putting a premium on trying to get thicker and trying to get bigger, they certainly have. And that hasn't seemed to mess with their mobility."

Sam Pittman was giving a rundown on all the position groups during his Wednesday radio appearance and had just gotten through the cornerbacks when he added this gem.

"And then you've got crazy Joe Foucha," Pittman said. "A 'thud' to him is full tackle. I mean, slow down Joe, we're trying to save our guys."

Foucha is the Razorbacks' second-leading returning tackler with 87 stops in 2019 behind linebacker Bumper Pool (94).

Redshirt sophomore Luke Jones received a lot of playing time at first-team left guard early in training camp while Ricky Stromberg and returning starter Ty Clary were battling it out at center.

Now Clary is splitting reps with Jones and others at left guard, while Jones, Beaux Limmer and Shane Clenin are taking work at center in what is an ever-evolving process to cross train and determine the top eight to 10 players in assistant coach Brad Davis' unit.

"We have looked at several different guys at that spot, at those three spots actually, and we're just trying to find the right combination," Coach Sam Pittman said of the center and guard jobs. "We feel like we're pretty close. The left guard position is probably the most open position that we have on the offensive line."

The betting service sportsbetting.ag has given odds to win the College Football Playoff national championship for each of the 77 FBS teams scheduled to play football this fall, and the Razorbacks are in a batch of 13 teams carrying 250-1 odds. The group also includes Army and fellow Power 5 teams Boston College, Duke, Georgia Tech, Kansas State, North Carolina State, Syracuse and West Virginia, among others.

Only Vanderbilt, at 300-1, has longer odds among SEC teams.