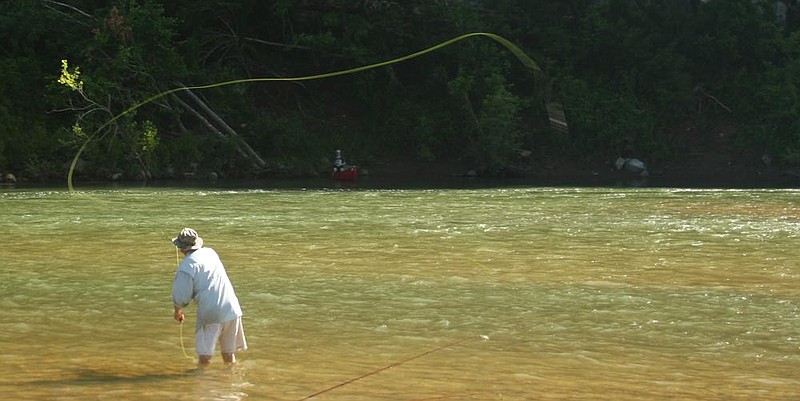 One such moment occurred Monday on Crooked Creek while fishing with Rusty Pruitt of Bryant. He was about 50 yards upstream fishing a riffle. The sun at my back illuminated him brilliantly, and the water sparkled like diamonds as it churned around him. Pruitt's fishing line looked like a green laser. He bent down and hoisted a smallmouth bass that glowed like molten bronze. He unhooked the fish, admired it briefly and released it with a crystalline splash.

"This is why I do it," I thought. "Material things crumble to dust, but a day on the water lasts forever."

The trip was a consolation prize of sorts born of an aborted dove hunting trip. We craved a good dove shoot, but doves were not to be found any place to which we had access. It was Labor Day, however, and we refused to let it go to waste. The alternative was a fishing trip, but after the previous week's insanity on the Buffalo River, we dreaded sharing the water with even more revelers on a holiday.

It was not to be. Driving north on Arkansas 14, we passed many vehicles heading south with canoes and kayaks strapped to their roofs. As we crossed the Arkansas 14 bridge over the Buffalo River, rental canoes were neatly arranged on the gravel bar like apple and lemon wedges on a fruit plate, but there were hardly any people.

Crooked Creek was even quieter. Two people launched kayaks at the Pyatt Access when we arrived, and five local people with two canoes launched directly after us. None were rowdy, although one member of that party loudly cataloged a litany of grievances about her co-workers.

The Creek was too low for a canoe laden with two middle-age men and all their gear, but it flowed well enough to scrape us across the tops of most rocks. We had to get out and drag in a few places at the beginning, but the first two-thirds of the float was deep enough.

The bigger problem was near perfect water clarity. Fish could see us from a long distance, and they were very skittish. Big smallmouth and Kentucky bass dashed under rocks as we entered every pool.

"The only way we'll catch anything today is pull over at the mouths of the riffles and wade fish," I said. "We're going to have to cast downriver because all the fish above us have gone to shelter."

We fished diligently and thoroughly but got no reward.

"They're feeding at night under that big, bright moon," Pruitt said. "They probably ate at sunup, and they'll probably eat again right about sunset."

We intended to arrive at the railroad trestle upstream from the Snow Access about sunset. Tournament anglers say you can't fish memories, but the memory of catching a mess of big smallmouths at the trestle at sunset about eight years ago is unforgettable.

Pruitt alternated between a spinning rig and a fly fishing rig. His fly was a pattern called an "Emily," personally tied by Karl Schmeucker, general manager of Wapsi Fly in Mountain Home, the world's largest supplier of fly tying materials. Schmeucker and Pruitt have been fishing partners for decades.

"That's one great thing about Crooked Creek," Pruitt said. "This time of year you can walk the whole thing. Karl knows all the landowners around here, and we'd walk long stretches and catch big 'pigs' all day long."

Only longear sunfish bit the Emily, and that was perfectly fine with Pruitt.

"It's the prettiest fish in Arkansas," Pruitt said.

Later he switched to a lead-eye leech.

"Smallmouths can't resist a leech," Pruitt said. "I like to cast it across the shoals and let it sweep down into a deep seam and then strip it across the current. Smallmouths will come out from under the rocks to get it."

As described, the leech broke the drought, producing the day's first few smallmouths. They were small, but a 10-inch smallmouth on a lightweight fly rod puts up a heroic fight.

I started the day throwing a Zoom Mini Lizard in watermelon red color on a Carolina rig, but it was fruitless. I ditched that and spent the rest of the day throwing a Zoom Mini Lizard in cotton candy color. I caught a couple of little smallmouths here and there, but the bites were all random. I never felt the energy of an oncoming hot streak. The lone beacon of hope flashed when a big fish bit under an overhanging bush. I made an awkward hookset to avoid whacking Pruitt in the head with the rod tip. The fish fought very hard for a few seconds before getting loose. I took it as a promising sign of better things to come, and it heightened my anticipation for a sunset blitz on the trestle.

As often happens, we thrashed unproductive water way too long. It's easy to do when there's so much attractive cover and when every new stretch of water looks better than the last. We also misjudged our progress. As the sun dipped low over the ridgetops, I thought we were near the trestle. We were still about 3 miles away.

Night fell very fast and very dark. The gradient steepened, so rapids were longer and more frequent. For once I was grateful for the low water because it virtually prevented overturning.

Canoeing in moving water is an art. The sound of rushing water indicates the swiftest current, and the shoals shimmer, even in the dark. Steer to the dark vees between the shimmers because that's where the water is deepest. We were right most of the time, but there is no path through some of the rapids. There was no choice but to get out and drag.

The night was pitch black when we reached the trestle. We figured our outfitter was probably angry with our tardiness, so we pressed forward and hugged the left bank. Foxfire glowed green in the moist bank soil, and the sky was brilliantly starlit. Jupiter and Mars shone brighter than the other orbs, and we gazed at them for a long time after pulling the canoe onto the terra firma of the Snow boat ramp.

We were exhausted, but The Beatles Channel on Sirius XM played every Beatles recording in chronological order, punctuated by interesting trivia about each track. It kept me awake and alert for the long drive home. 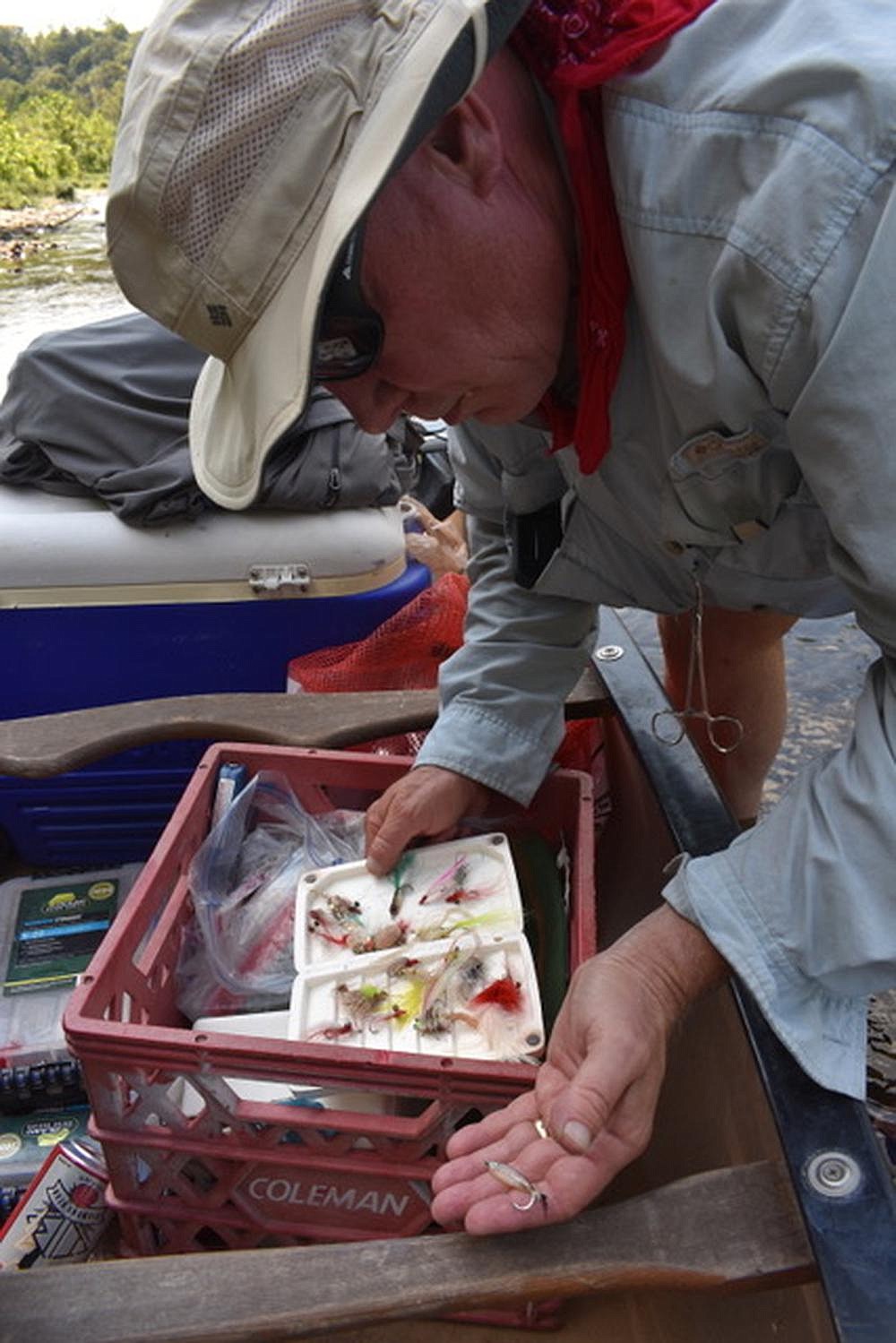 Rusty Pruitt peruses a selection of flies before settling on a pattern called an Emily while fishing on Crooked Creek. (Arkansas Democrat-Gazette/Bryan Hendricks) 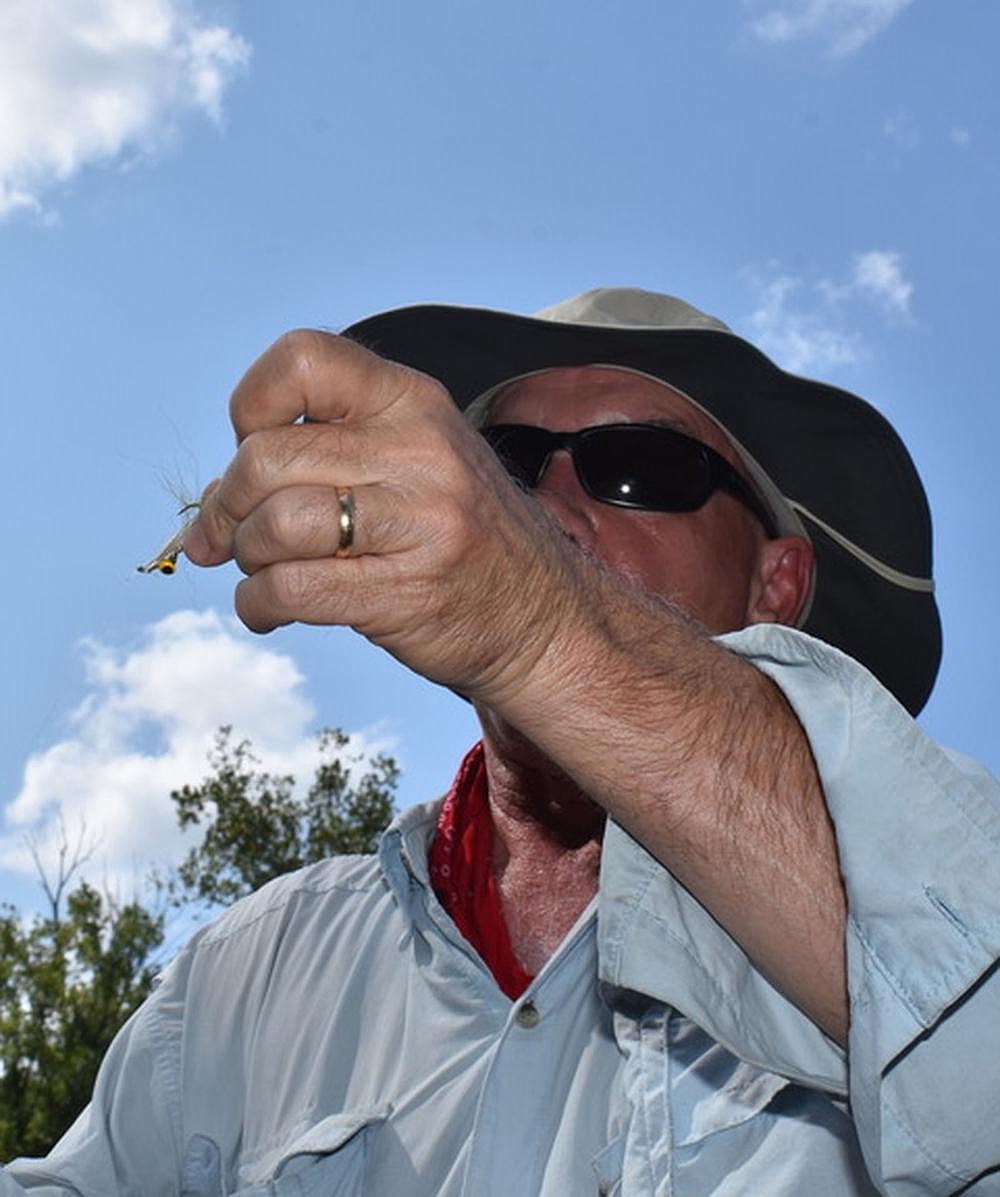 Rusty Pruitt peruses a selection of flies before settling on a pattern called an Emily (shown) while fishing on Crooked Creek. (Arkansas Democrat-Gazette/Bryan Hendricks)