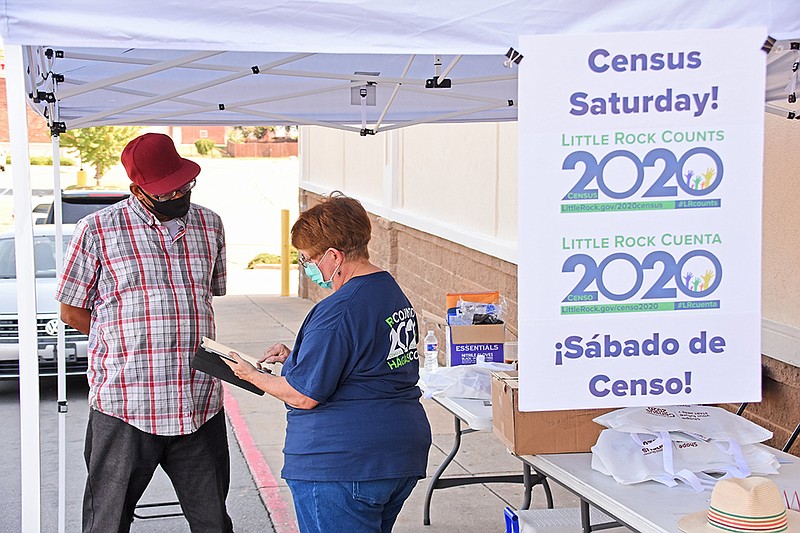 Fewer than three weeks remain of an extra-long census count period, which will not be repeated for another 10 years.

The share of Arkansans who have filled it out on their own lags behind 2010, threatening an undercount of the state's residents and a negative impact on the state financially.

Volunteers mobilized well in advance of the 2020 census to ensure it would be better than the last but the coronavirus pandemic hit and plans for increased in-person outreach went out the window, including hopes of placing at least one census support site in every library in the state.

The self-response rate nationwide is 65.7%, and the total percent of counted households, when including follow-up visits, is 90.1%.

Some believe part of that success in counting people who hadn't previously responded is because of an approach that was tried in Arkansas but not everywhere else. In their efforts to safely follow up with households, census-takers simply left questionnaires on front doorsteps for people to mail in, along with instructions on how to fill it out online if desired.

Census-takers can get information during a household visit but information can be obtained as well from neighbors or landlords on behalf of the household.

Information collected by proxy is less reliable, said Brad Cameron, a spokesman for Arkansas Counts. His group formed in 2019 to make sure all Arkansans were counted. Cameron wants as many people as possible to participate on their own by going to my2020census.gov or by calling (844) 330-2020.

The census, established by the U.S. Constitution, is a critical event every 10 years that determines an array of things affecting people's daily lives, including political boundaries and educational or infrastructure apportionments from the federal government, among other things.

Undercounts of people in specific areas mean less political representation and less money. Cameron says every 1% undercount, which would be 30,000 uncounted Arkansans, would likely result in $1 billion less in federal money making its way to Arkansas than it should until the next census.

The count usually runs from mid-March until July 31, but federal officials extended the count to Oct. 31 because of the coronavirus risk. Then the Census Bureau announced that it would change the deadline to Sept. 30, removing census-takers from their positions by that date.

People sued, concerned about an undercount, and a federal judge has halted the Census Bureau's decision, though the case has yet to be resolved.

Cameron and others are operating as if Sept. 30 will be the last day of counting.

Census-takers remain in Arkansas, visiting households that haven't yet responded to gather responses and households that have responded, for "quality control checks," Linda Gladden, a spokeswoman for the bureau, wrote in an email to the Arkansas Democrat-Gazette. Notices will be left on the doors of people who don't answer, explaining how to fill out the form, she said.

Additionally, some people will receive another paper questionnaire by Monday if they haven't yet responded and live in a lower-response tract, Gladden said.

When the pandemic first hit, many Arkansas advocacy groups' efforts to reach out to people were halted and had to be rethought. Originally, volunteers planned to go to events, especially those that drew people from rural areas that are harder to count, to approach people about taking part.

"Then in August they were all begging, 'Can we do community events?'" she said.

Her organization, primarily focused on immigration rights and advocacy, has joined forces with others, including Arkansas Counts, to make sure everyone is counted, including harder-to-reach immigrant populations.

Her staff was trained on proper personal protective equipment and went back out to reach people, Reith said. There have been no infections since.

Eventually this summer, cities started hosting Census Saturdays, during which tables were set up at places like grocery stores, to reach people as they went by. Volunteers also started targeting crowds at coronavirus relief opportunities, such as food drives. Pine Bluff paired census outreach with a sweet potato drive.

"There's just so much need ... they want to feel helpful," Reith said.

But the vision of library census kiosks was realized in fits and starts because of closures and concerns for public health, and not as many as planned were set up.

Libraries are a lifeline for residents who don't have internet connections at home, and the library can reach out to them about the census when they're there, Cameron said.

"That felt like it was going to be our holy grail," Cameron said.

Reith believes the state could have gotten close to 100% counted if census advocates had been able to do everything they'd planned.

"There's a lot of success to point out, but we know some communities will be missed," she said.

Reith is encouraged by the work done to reach "hard to count" communities, which include people of color or lower income, among other characteristics.

Arkansas Counts teamed up as well with the Arkansas Coalition of Marshallese, which were likely undercounted by thousands of people in 2010, Reith said.

Reith noted that this time, some of the lower-responding areas appear to be more rural counties.

Volunteers in Izard County set up a table at the Hometown Market in Melbourne and another table at the volunteer fire department in Calico Rock, County Judge Eric Smith said. Izard County has the second-lowest self-response rate in Arkansas at 38.1%. It's also home to the town with the lowest self-response rate so far, out of 500 municipalities in Arkansas, according to the Census Bureau. Guion, where 86 people were counted in 2010, has an 11.4% response rate.

Smith said not everyone received a questionnaire in the county, and many don't have reliable internet to fill it out online.

But he thinks a lot of people have filled it out, thanks to visits from census-takers leaving questionnaires on doorsteps. The Census Bureau doesn't publish data on the overall percentage of households counted -- by self-response or follow-up outreach -- for counties or municipalities, the way it does for states.

Smith is concerned by the thought of an undercount. He's promoted the census at every Quorum Court meeting, on social media and on signs on doors. The county has 1,000 miles of roads, 900 of them dirt and 100 of them asphalt.

Sufficient money, apportioned according to census numbers, will help fix the county's roads, he said.

"I'm hoping the door-to-door is going to get our numbers up," he said. "That's where we get our funding for the county."