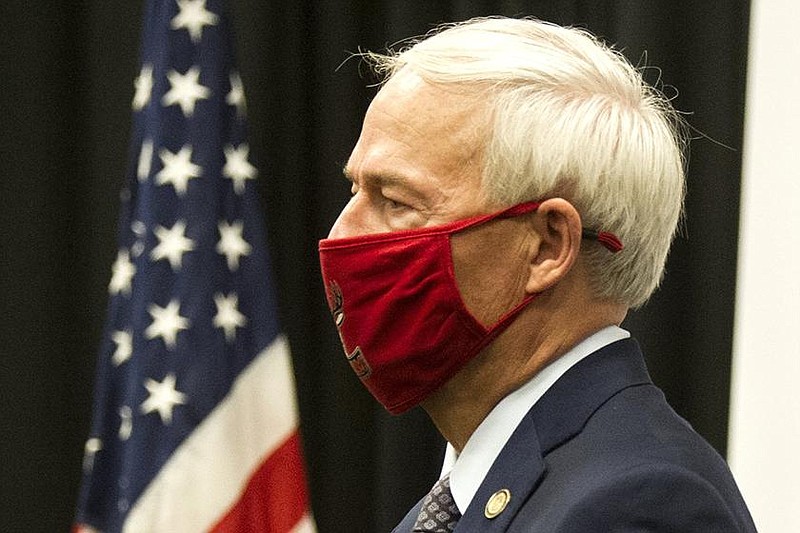 Gov. Asa Hutchinson waits to speak at his last daily coronavirus update Friday in Mena. He cautioned against overreacting to the sudden jump in cases. More photos at arkansasonline.com/912gov/. (Arkansas Democrat-Gazette/Stephen Swofford)

Arkansas' count of confirmed coronavirus cases rose by 1,107 on Friday, setting a record for a one-day increase for the second Friday in a row.

"That's possible, and so that's what we want to continue to look at in terms of what we see in the coming days," he said.

The death toll from the virus, as tracked by the state Department of Health, rose by 13, to 953.

Although 72 covid-19 patients were newly admitted to hospitals in the state, the total number of hospitalized patients remained unchanged, at 392, as other patients were discharged or died.

The number of patients on ventilators fell by three, to 76.

Hutchinson said he expected to see a jump in the case count after a few days of lower-than-usual increases, in part because of the way commercial laboratories report the test results to the state.

Of the confirmed cases added to the count Friday, 225 came from one lab, and a third of those results were from last week, he said.

"I don't want to minimize it, but at the same time you can't overreact to one day's data," Hutchinson said. "You just want to take a deep dive into it" to find out where infections are occurring.

The state's confirmed cases are those diagnosed through polymerase chain reaction, or PCR tests.

In addition to the increase in those cases, the state reported that its count of "probable" cases, which include those diagnosed solely through less-sensitive antigen tests, rose by 73, to 1,072.

[Video not showing up above? Click here to view » https://www.youtube.com/watch?v=DcFVP2moPjs]

The state cumulative count of confirmed cases rose to 67,911.

The increase in confirmed cases on Friday was just the third time that count had risen by more than 1,000.

The previous record was an increase of 1,094 confirmed cases on Sept. 4.

Friday's combined increase of 1,180 confirmed or probable cases also set a record, as did its increase of 1,076 confirmed cases that were not among prison or jail inmates.

It was the first time cases among the state's non-incarcerated population had risen by more than 1,000 in a single day.

Over a rolling seven-day period, the average number of confirmed and probable cases added to the state's total each day rose by one, to 615.

According to data from the Covid Tracking Project, which collects information from state health departments, that was the fifth-highest rate in the country, behind North Dakota, South Dakota, Missouri and Iowa.

The number of confirmed cases in Arkansas that were considered active rose by 517, to 5,713, as 577 people were newly classified as having recovered.

Despite Friday's jump in cases, however, that total, as well as the number of people who were hospitalized, remained below their levels in late July and early August.

The state's active cases peaked at 7,387 on Aug. 9, while the number of people hospitalized with the virus peaked at 526 on Aug. 4.

Of the cases that were added to the total Friday, 316, or almost 29%, were among Arkansans age 18-24, even though that age group made up just 15% of the cumulative count of cases since the start of the pandemic on March 11.

The 18-24-year-old age group accounted for 29% of the cases in the state that were active as of Thursday, up from 20% a week earlier.

At the University of Arkansas, Fayetteville, the number of known cases among people who have been on campus at some point since Aug. 1 grew on Wednesday and Thursday by 128, to 1,333, the university reported on its website.

But the number of active cases listed on the site, after reaching 923 on Monday, fell to 888 on Wednesday and 722 on Friday.

For Monday and Tuesday, the university reported 74 positives from off-campus tests and 16 positive results from on-campus testing.

The most recent on-campus testing totals published by UA are for a seven-day period that ended Sunday, with 2,169 tests over a time period that included a three-day drive-through testing event.

But Rushing said, "I believe there were well over 500 tests conducted on campus Monday through Thursday."

A letter obtained by the Arkansas Democrat-Gazette, dated Tuesday, to residents of an on-campus residence hall lists actions that are "strongly" recommended.

With the subject line, "COVID-19 Notification - Immediate Action Required," the email addressed to residents of the "A" portion of Adohi Hall states that "at least five or more" positive cases have been identified "within your hall."

One recommendation states: "Encourage residents to be tested for COVID-19 at Pat Walker Health Center or one of the community clinics found throughout northwest Arkansas, especially if any residents are experiencing possible symptoms or are aware they have been in close contact with anyone who has tested positive for COVID."

It's also recommended to "immediately suspend" all in-person group activities, and the letter states "residents only" should be permitted inside.

"Please know that our primary intention is to keep our campus as safe as possible during the pandemic and operating in person to the maximum extent," states the letter from Matt Mills, the university's emergency manager.

"We are sending messages to certain houses, university houses, floors, Greek houses, if we noticed that there are a number of students that are infected in those houses, encouraging them to be tested," Robinson said at a virtual meeting of the faculty senate. "And if we don't get the compliance we want, then we will mandate testing for those people living in those houses."

Arkansas State University in Jonesboro listed 187 active cases on its website, up from 172 a day earlier.

Meanwhile, in a memo to superintendents this week, the state Department of Education's Division of Elementary and Secondary Education said dances and traditional parades celebrating homecoming won't be allowed this fall.

"Homecoming not only enhances campus activities but also promotes community socialization that increases the likelihood of virus transmission," the Education Department said in the directives. "Schools must take steps to reduce risks."

• No traditional homecoming parades -- but a district can host a caravan for homecoming royalty as long no more than one student, with family members, occupies a single vehicle.

• Coronation ceremony for homecoming queen/king must follow all social-distancing guidelines and should be livestreamed if conducted during the school day for those that cannot attend because of capacity issues.

• Social-distancing requirements must be adhered to at the homecoming football game and at all associated activities.

"We understand that this is a disappointment to students and families who are affected, but at this time, events where social distancing and mask-wearing do not occur run the risk of further spreading the disease and putting others at risk," the state memo said.

Virus cases prompted a high school in western Arkansas and a charter school in Jacksonville to announce shifts to all-virtual instruction.

Classes at Lavaca High School will go all-online next week, the school said on its Facebook page Friday.

"Lavaca Schools has received notification of positive Covid-19 cases at LHS," the school said in a post on the page Friday.

"We have called the Arkansas Department of Health & will be following their recommendations & guidelines. At this time, we are currently identifying the probable close contacts to those positive cases & contacting students/guardians."

The cases also caused the school to cancel its high school football game that had been scheduled on Friday at Mountainburg High School, Lavaca Superintendent Steve Rose said.

All other athletic activities at Lavaca High School were suspended indefinitely.

"Our Junior High Dragons played Lavaca Thursday night, so we understand you may be concerned," Mountainburg School District Superintendent Debbie Atwell said in a letter posted on her district's Facebook page.

"We have been informed that no positive cases or impacted individuals participated in the game. The Arkansas Department of Health has advised us to continue to monitor our players, but no further actions are needed at this point."

The move was made easier by the school's preparations and the fact that a majority of the seventh-through-12th grade school's students had chosen full-time online instruction, Noel said.

Word of a virus case late Thursday prompted Nemo Vista Elementary in Conway County to switch to virtual instruction for fifth graders on Friday to allow time to notify people who had been in close contact with the person who had tested positive, Nemo Vista School District Superintendent Logan Williams said.

He said on-site instruction will resume Monday except for those who have to be quarantined.

The Little Rock School District reported two new cases -- one student and one employee at Southwest High -- in the 24-hour period ending at 3 p.m. Friday.

During the same period, 12 students and four staff members were directed to quarantine as the result of symptoms or exposure to a virus case.

The cases added to the total on Friday included 105 in Pulaski County; 91 in Washington County; 61 in Craighead County; 52 in Benton County; 51 in Sebastian County; 47 in Jefferson County; 35 in Crawford County; 25 in Faulkner County; and 24 in Garland County.

The count of virus deaths increased by two each in Washington, Pulaski, Garland and Lee counties and by one each in Benton, Jefferson, Saline, Boone and Mississippi counties.

Among nursing-home residents, the state's count of virus deaths increased by four, to 332.

At a news conference at the University of Arkansas Rich Mountain in Mena, Hutchinson addressed news reports about a study on Friday that suggested people who eat at restaurants might be at a higher risk of catching the virus.

Patients who tested positive for the virus were twice as likely as those who tested negative to have reported eating at a restaurant in the two weeks before they became ill, the study found.

Hutchinson said health officials in Arkansas haven't seen a link between eating out and catching the virus.

Of the people in the state with active infections as of Thursday, he noted, only 4% reported eating at a restaurant in the two weeks before they were diagnosed.

By contrast, he noted that 13% said they had been to a store.

"I believe our restaurants are really, really working hard to comply with the guidelines, to make sure their environment is safe for their customers, and they know that's important for their business model," Hutchinson said.

Health Department spokesman Gavin Lesnick noted that study says efforts to reduce possible exposures should be implemented, "and we have taken steps to do that through our directive on dine-in operations at restaurants."

"We monitor this closely and will continue to do so going forward," he said. 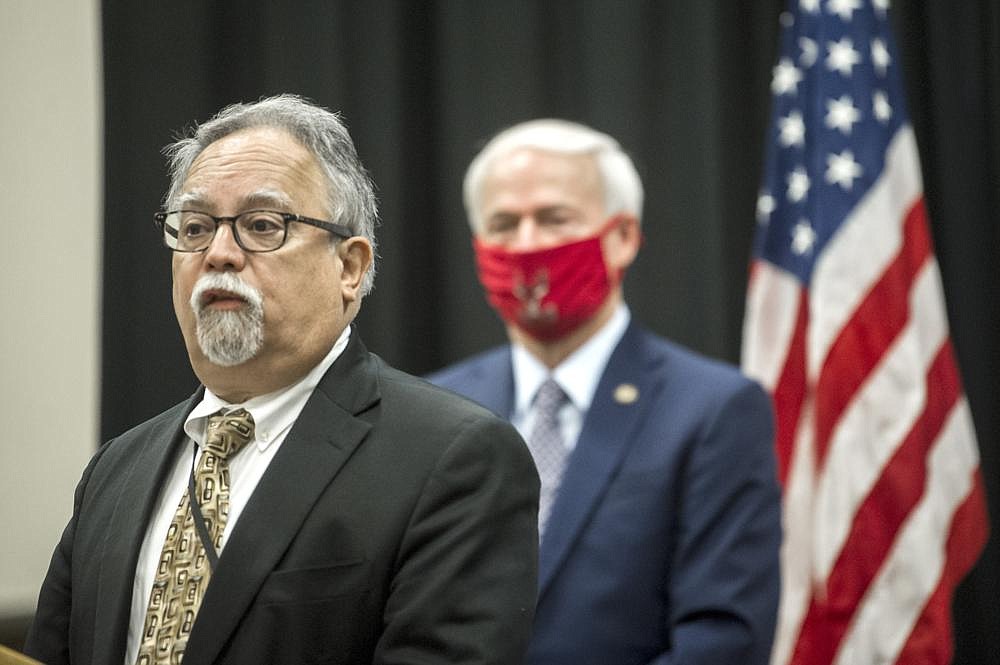 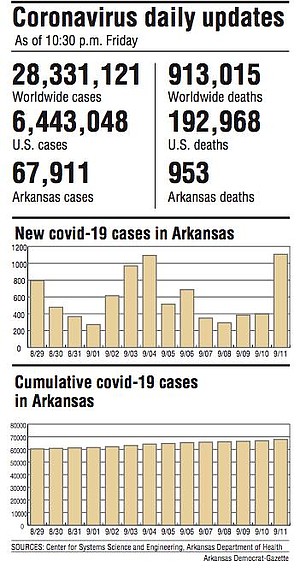