On day to remember the lost of 9/11, politics is put aside 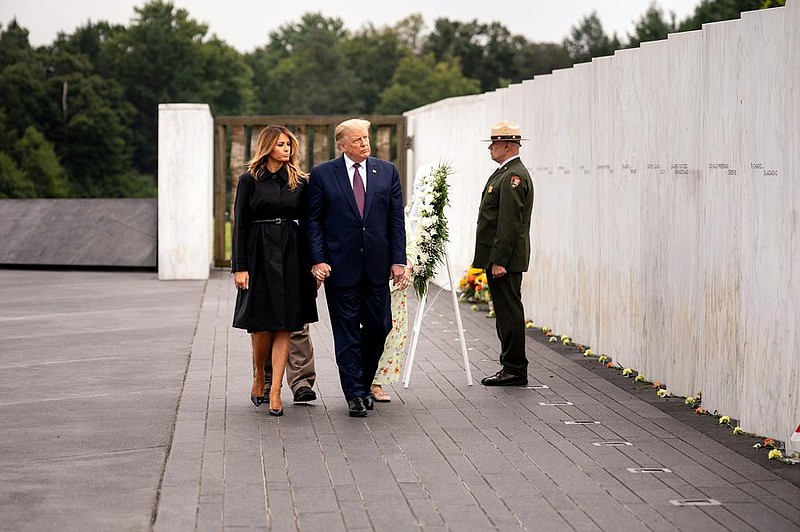 NEW YORK -- Americans commemorated the Sept. 11, 2001, terror attacks Friday as another national crisis, the coronavirus pandemic, reconfigured ceremonies and a presidential campaign carved a path through the memorials.

In New York, victims' relatives gathered Friday morning for split-screen remembrances at the World Trade Center's Sept. 11 memorial plaza and on a nearby corner, set up by separate organizations that differed on balancing tradition with virus safety.

Standing on the plaza, with its serene waterfall pools and groves of trees, Jin Hee Cho said she couldn't erase the memory of the death of her younger sister, Kyung, in the attack that destroyed the trade center's twin towers.

"It's just hard to delete that in my mind. I understand there's all this, and I understand now that we have even covid," said Cho, 55. "But I only feel the loss, the devastating loss of my flesh-and-blood sister."

Around the country, some communities canceled 9/11 ceremonies, while others went ahead, sometimes with modifications. The Pentagon's observance was so restricted that not even victims' families could attend, though small groups could visit its memorial later in the day.

[Video not showing up above? Click here to view » https://www.youtube.com/watch?v=BgPGWjELIhM]

On an anniversary that fell less than two months before the presidential election, President Donald Trump and Democratic challenger Joe Biden both headed for the Flight 93 National Memorial in the election battleground state of Pennsylvania -- at different times of day.

Biden also attended the ceremony at ground zero in New York and, in an exchange rarely seen in today's political environment, he and Vice President Mike Pence swapped pleasantries and greeted each other by briefly bumping elbows.

In short, the 19th anniversary of the deadliest terror attack on U.S. soil was a complicated occasion in a maelstrom of a year, as the U.S. grapples with a pandemic, searches its soul over racial injustice and prepares to choose a leader to chart a path forward.

Still, families say it's important for the nation to pause and remember the hijacked-plane attacks that killed nearly 3,000 people at the trade center, at the Pentagon outside Washington and in a field near Shanksville, Pa. -- shaping American policy, perceptions of safety, and daily life in places from airports to office buildings.

"People could say, 'Oh, 19 years.' But I'll always be doing something this day. It's history," said Annemarie D'Emic, who lost her brother Charles Heeran, a stock trader. She went to the alternative ceremony in New York, which kept up the long-standing tradition of in-person readers.

The Stephen Siller Tunnel to Towers Foundation, formed in honor of a firefighter killed on 9/11, felt in-person readers were crucial to its ceremony's emotional impact and that people could recite names while keeping a safe distance. By contrast, a recorded reading of names emanated from speakers placed around the memorial plaza. Leaders said they wanted to keep readers and listeners from clustering at a stage.

As in past years on the plaza, many readers at the alternative ceremony added poignant tributes to their loved ones' character and heroism, urged the nation not to forget the attacks and recounted missed family milestones: "How I wish you could walk me down the aisle in just three weeks," Kaitlyn Strada said of her father, Thomas, a bond broker.

Other victims' relatives, however, weren't bothered by the switch to a recording at the ground zero ceremony, which also drew hundreds.

"I think it should evolve. It can't just stay the same forever," said Frank Dominguez, who lost his brother, police officer Jerome Dominguez.

The Sept. 11 memorial and the Tunnel to Towers foundation also tussled over the Tribute in Light, a pair of powerful beams that shine into the night sky near the trade center, evoking the twin towers. The 9/11 memorial initially canceled the display, citing virus safety concerns for the installation crew.

After the foundation vowed to put up the lights instead, the memorial changed course with help from its chairman, former Mayor Mike Bloomberg, and Gov. Andrew Cuomo. The lights again went on at dusk Friday.

Tunnel to Towers, meanwhile, arranged to display single beams for the first time at the Shanksville memorial and the Pentagon.

The divisive and combustible presidential campaign took a brief pause Friday as Trump and Biden dropped their political antagonism to focus on the somber anniversary.

"We were united by our conviction that America was the world's most exceptional country, blessed with the most incredible heroes, and that this was a land worth defending with our very last breath," Trump said in Shanksville during a ceremony at the site where United Airlines Flight 93 crashed after passengers and crew rebelled against hijackers aiming the craft toward Washington.

"My mom used to say, 'Joey, bravery resides in every heart and someday it will be summoned. The question is, will you respond?'" said Biden, who flew to Pennsylvania after the ceremony in New York. "People responded. It is absolutely incredible. ... This is a country that never, never, never, never, never gives up. Ever."

While paying tribute to a day that 19 years ago shattered the country's sense of serenity, Friday played out with a feeling unfamiliar in the current campaign: normalcy. The candidates paused for reflection and rituals, visited firehouses and offered, however temporarily, messages of unity and patriotism.

Shortly after he flew from Washington to Pennsylvania, Trump participated in a moment of silence aboard Air Force One at 8:46 a.m., the time the first hijacked plane hit the first Manhattan tower.

Trump, first lady Melania Trump and staff members gathered in a conference room on the plane.

In Shanksville, he delivered a solemn tribute under cloudy skies, speaking directly to families who lost loved ones in the attacks.

"Today every heartbeat in America is wedded to yours," Trump said. "The heroes of Flight 93 are an everlasting reminder that no matter the danger, no matter the threat, no matter the odds, America will always rise up, stand tall and fight back."

Trump recalled how the nation came together in the days after the attacks.

"It was a unity based on love for our families, care for our neighbors, loyalty to our fellow citizens, pride in our flag, gratitude for our police and first responders, faith in God -- and a refusal to bend our will to the depraved forces of violence, intimidation, oppression and evil," he said.

Biden traveled early Friday from his home in Wilmington, Del., to New York for the ceremony at the National September 11 Memorial and Museum in Lower Manhattan.

"It takes a lot of courage for someone that lost someone to come back today," Biden told a reporter. "I know from experience -- losing my wife, my daughter, my son -- you relive it, the moment, as if it's happening. It's hard. It's a wonderful memorial, but it's hard. It just brings you back to the moment it happened, no matter how long, how much time passes. So I admire the families who come."

At one point he moved close to comfort a woman in a wheelchair who said her son died on 9/11 at age 43. She held a picture in her lap. Biden picked it up and examined it, reflecting on losing his son, Beau, to brain cancer in 2015.

"It never goes away," Biden said. The woman repeated the phrase, while in the background the names of those who died on 9/11 were read aloud.

The woman, 90, and perhaps joking, told Biden she was entering her "last year," at which point her daughter suggested she knock it off. "You don't know that, Mom!" she said. "You're still kicking!"

"You and I will be here next year," Biden assured the woman.

Biden left that service early to travel to Shanksville, where he laid a white wreath at the foot of a marble column honoring First Officer LeRoy Homer Jr., one of the 40 victims of the plane crash. Biden and his wife, Jill, then stood for a moment of silence before greeting members of Homer's family.

Biden also stopped by a fire station in Shanksville, delivering a cake that Jill Biden had baked and six-packs of Bud Light and Iron City Beer that he had vowed to deliver on a previous visit.

​​​​​Information for this article was contributed by Michael R. Sisak, Karen Matthews, Jennifer Peltz, Alexandra Jaffe, Darlene Superville, Ted Shaffrey and Mark Scolforo of The Associated Press; and by Matt Viser and Philip Rucker of The Washington Post. 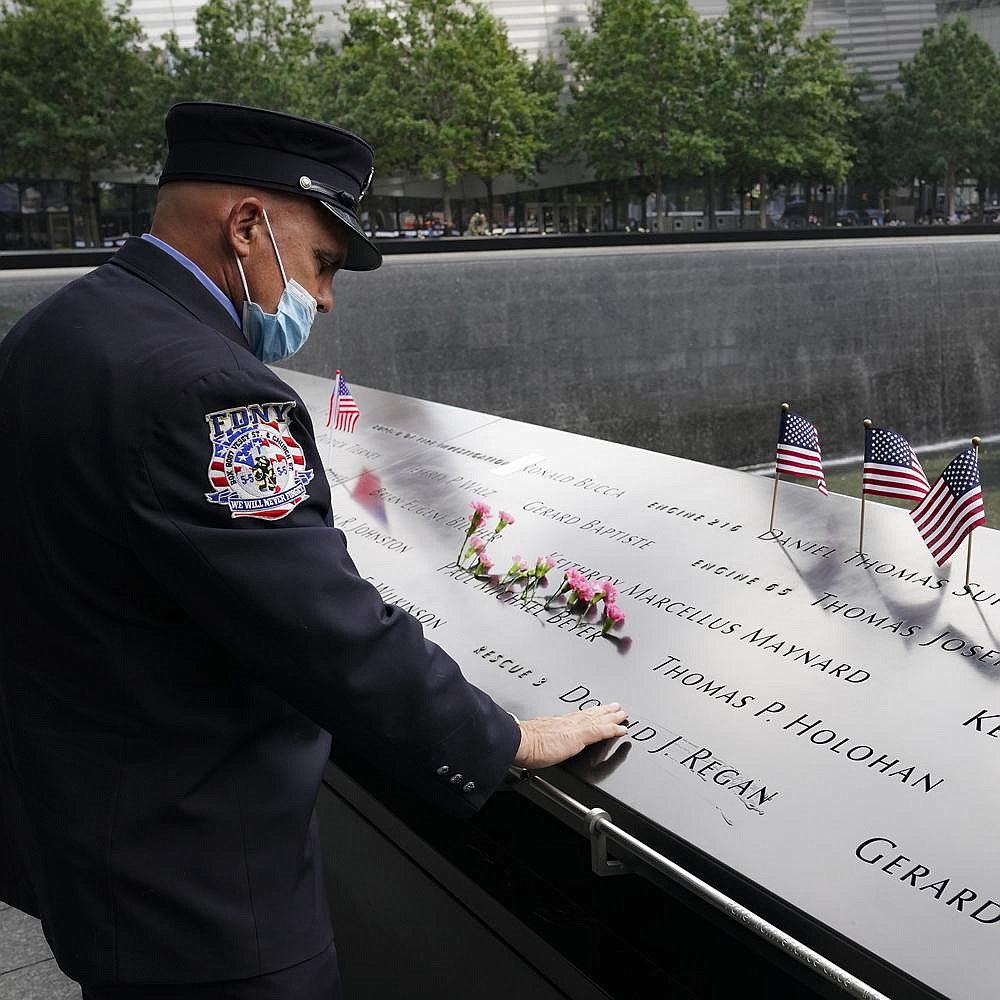 A firefighter mourns over the inscribed names of the victims Friday at the National September 11 Memorial and Museum in New York. Around the country, some communities canceled remembrances because of the pandemic, while others went ahead. More photos at arkansasonline.com/912ceremonies/. (AP/John Minchillo) 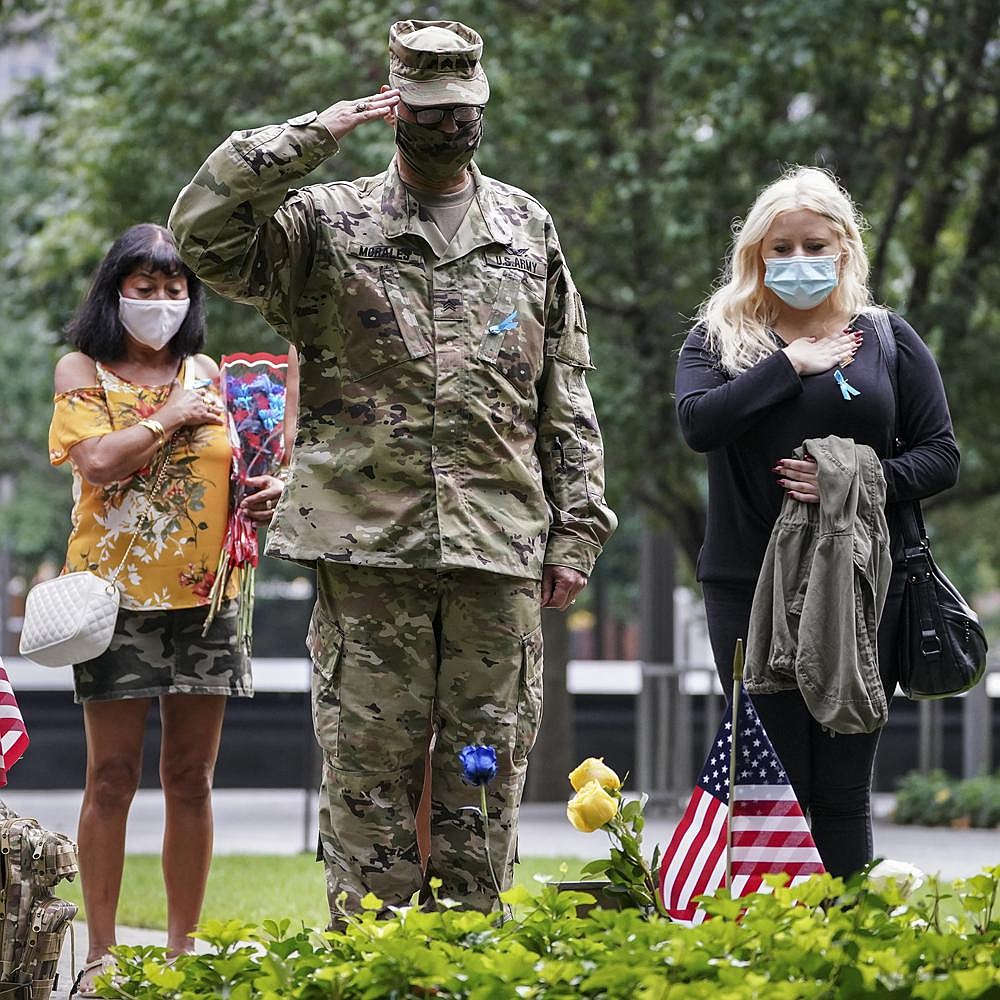 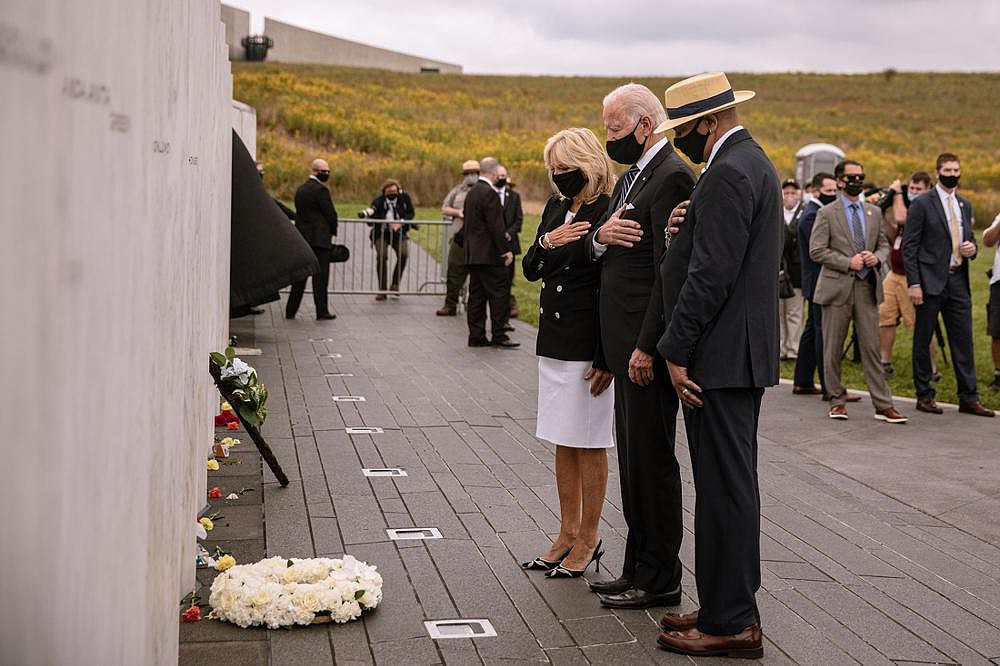 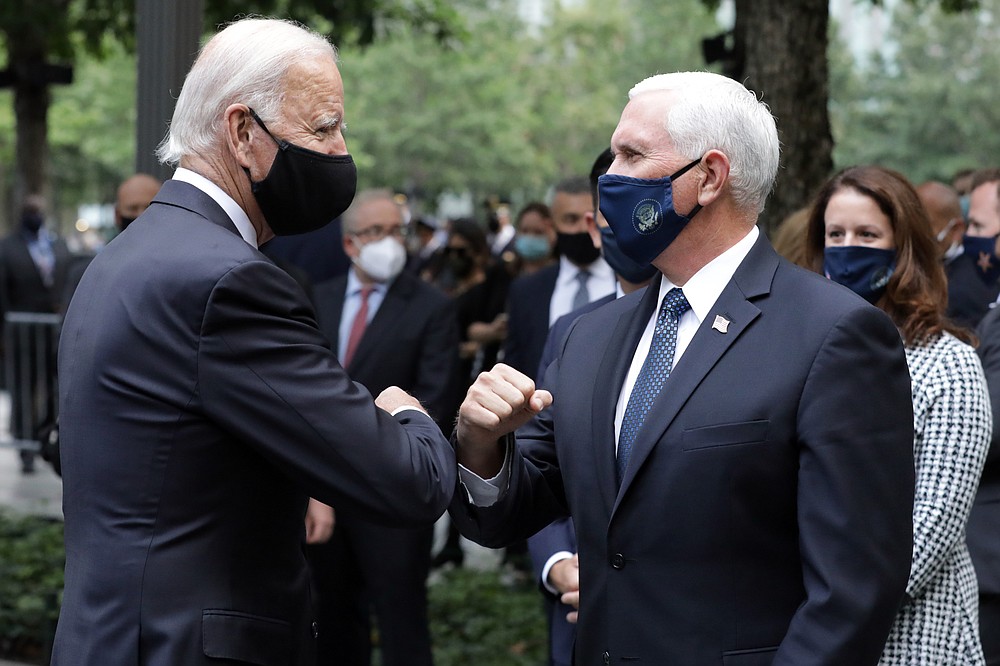 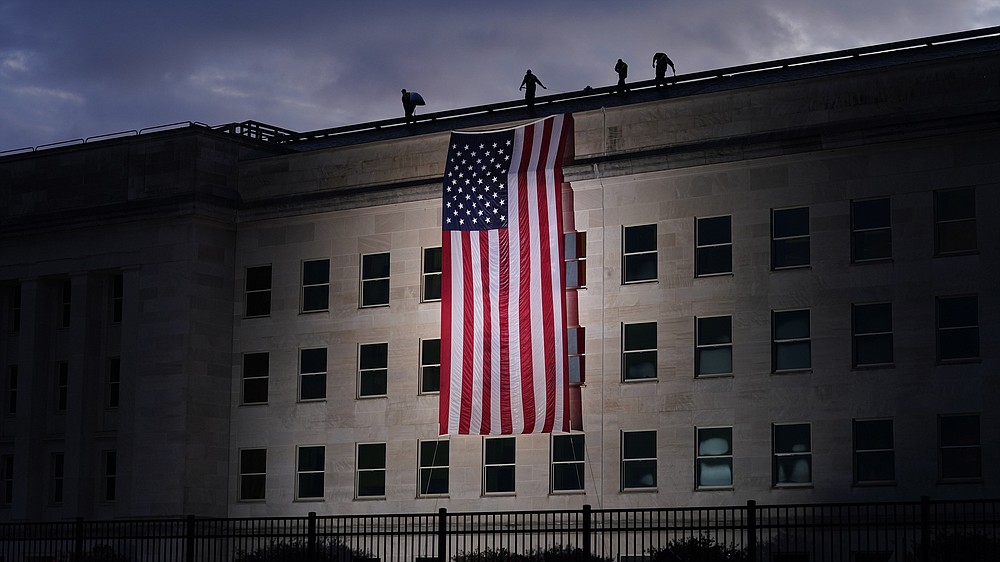 A large American flag is unfurled at the Pentagon ahead of ceremonies at the National 9/11 Pentagon Memorial to honor the 184 people killed in the 2001 terrorist attack on the Pentagon, in Washington, Friday Sept. 11, 2020. (AP Photo/J. Scott Applewhite) 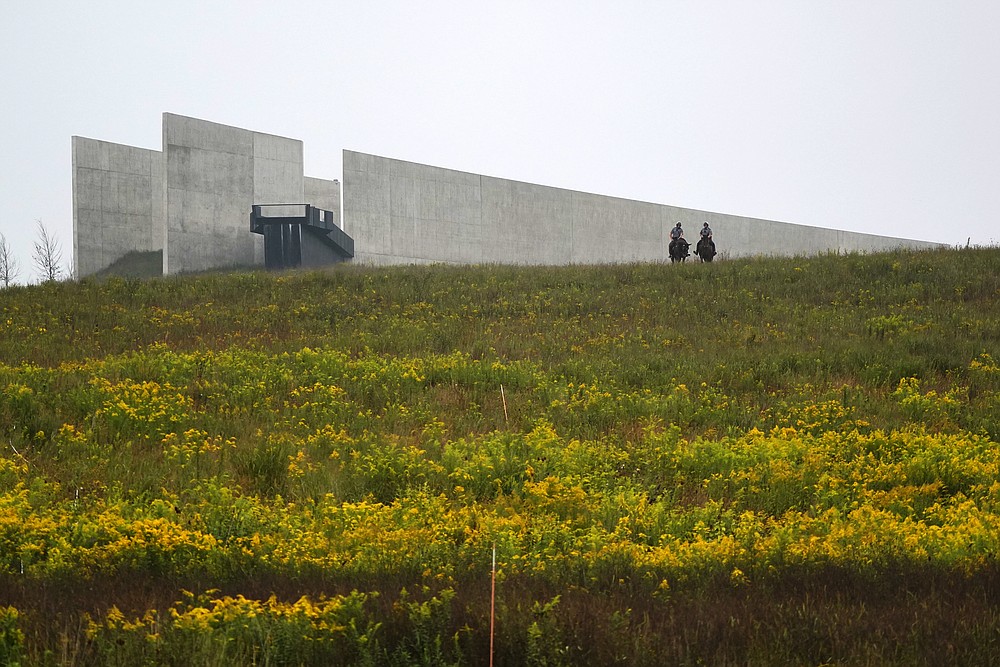 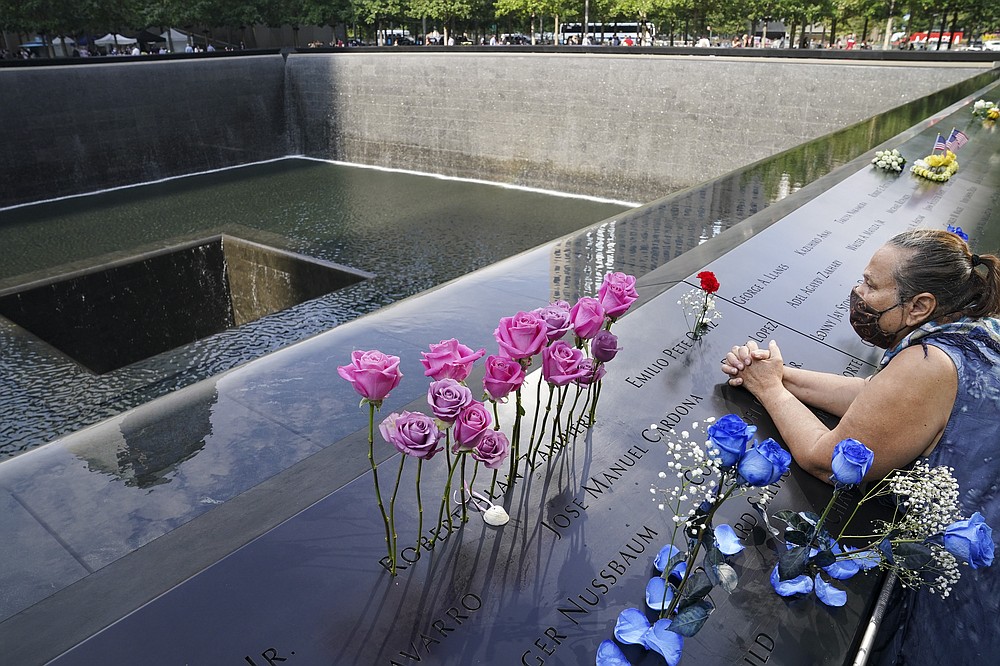 A mourner prays over the name cut-out of the deceased Emilio Pete Ortiz at the National September 11 Memorial and Museum, Friday, Sept. 11, 2020, in New York. Americans will commemorate 9/11 with tributes that have been altered by coronavirus precautions and woven into the presidential campaign. (AP Photo/John Minchillo) 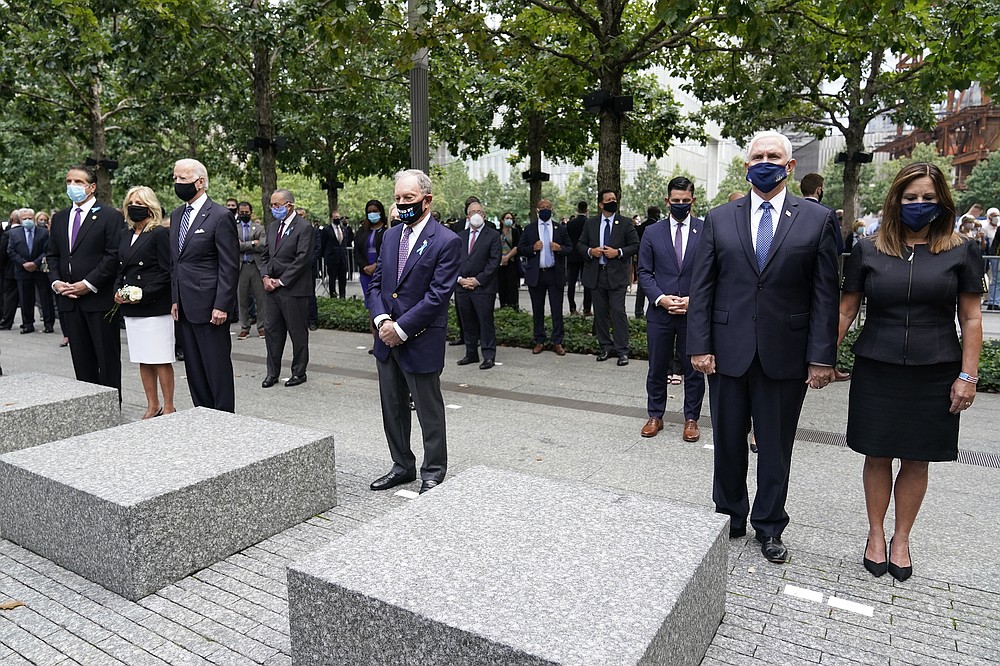 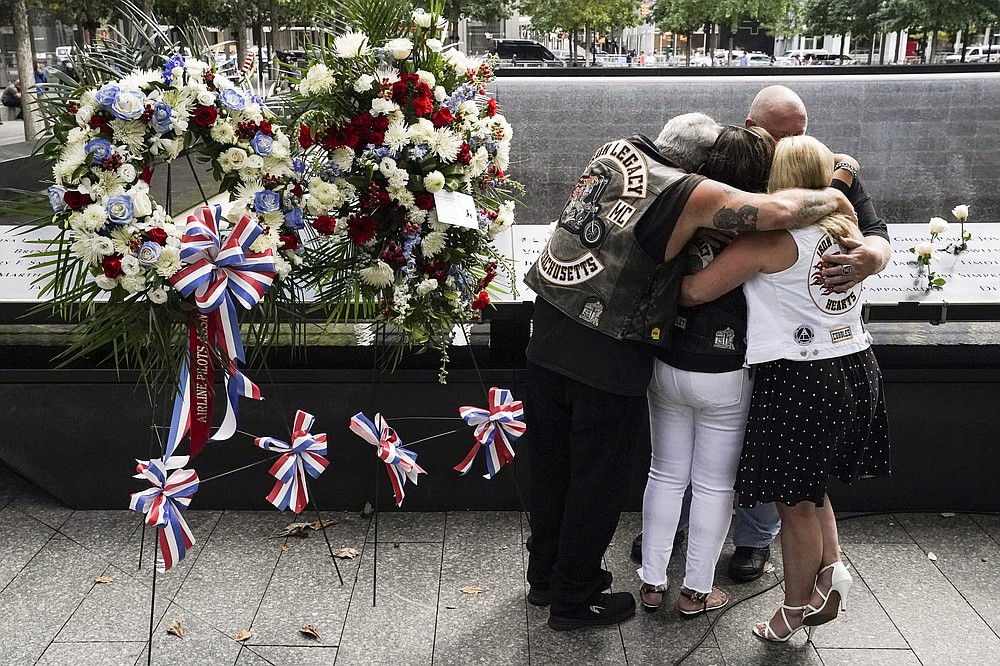 Mourners hug beside the names of the deceased Jesus Sanchez and Marianne MacFarlane at the National September 11 Memorial and Museum, Friday, Sept. 11, 2020, in New York. Americans commemorated 9/11 with tributes that have been altered by coronavirus precautions and woven into the presidential campaign. (AP Photo/John Minchillo) 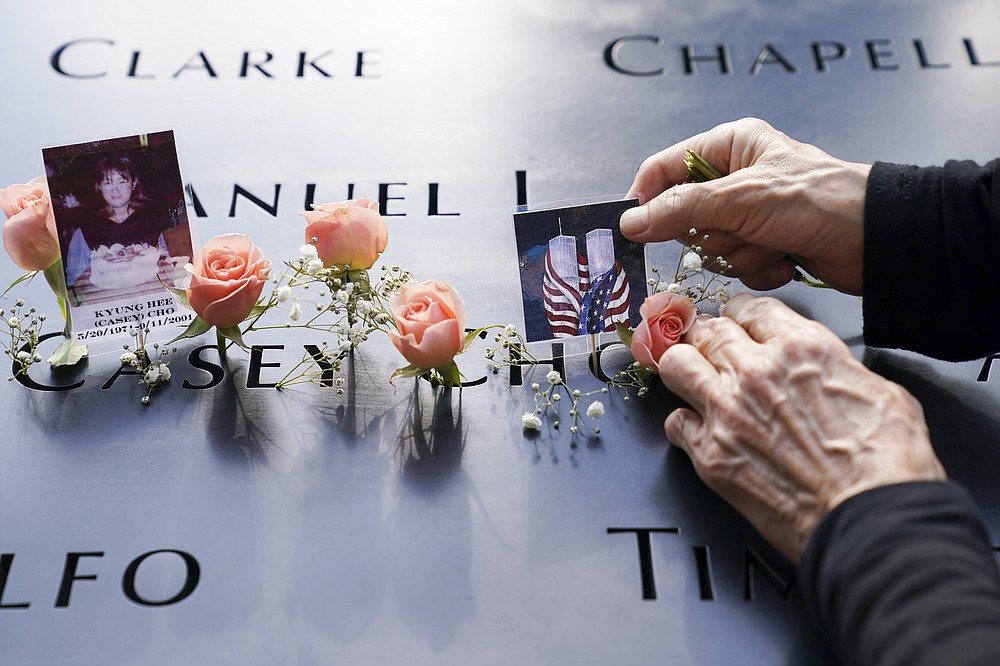 Mourners place flowers and pictures in the name cut-out of Kyung Hee (Casey) Cho at the National September 11 Memorial and Museum, Friday, Sept. 11, 2020, in New York. Americans are commemorating 9/11 as a new national crisis in the form of the coronavirus pandemic reconfigures and divides anniversary ceremonies and a presidential campaign carves a path through the observances. (AP Photo/John Minchillo) 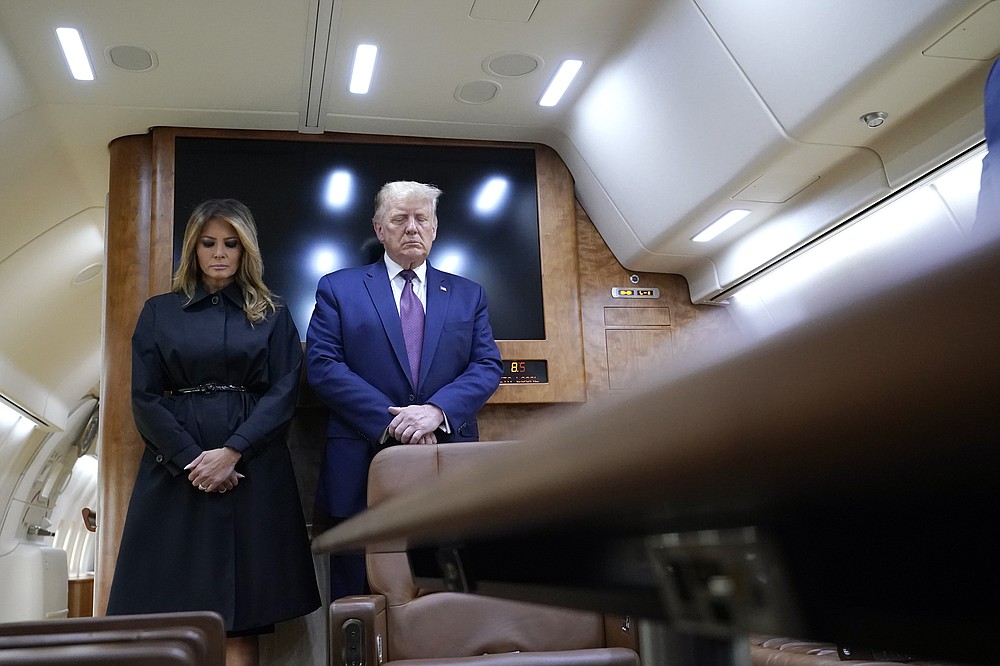 President Donald Trump and first lady Melania Trump pause for a moment of silence on Air Force One as he arrives at the airport in Johnstown, Pa., on his way to speak at the Flight 93 National Memorial, Friday, Sept. 11, 2020, in Shanksville, Pa. (AP Photo/Alex Brandon) 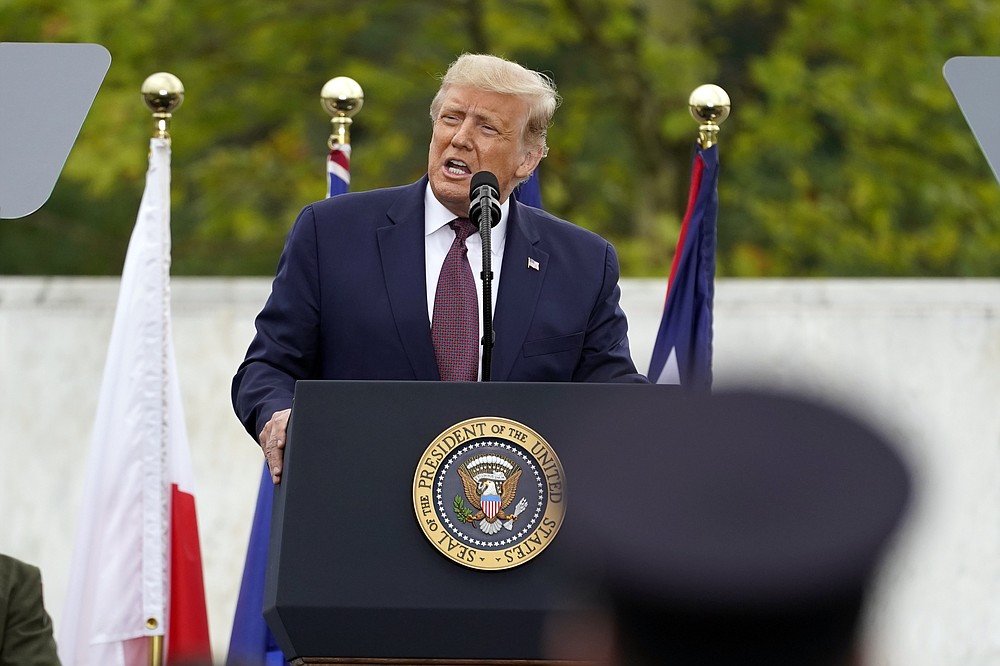