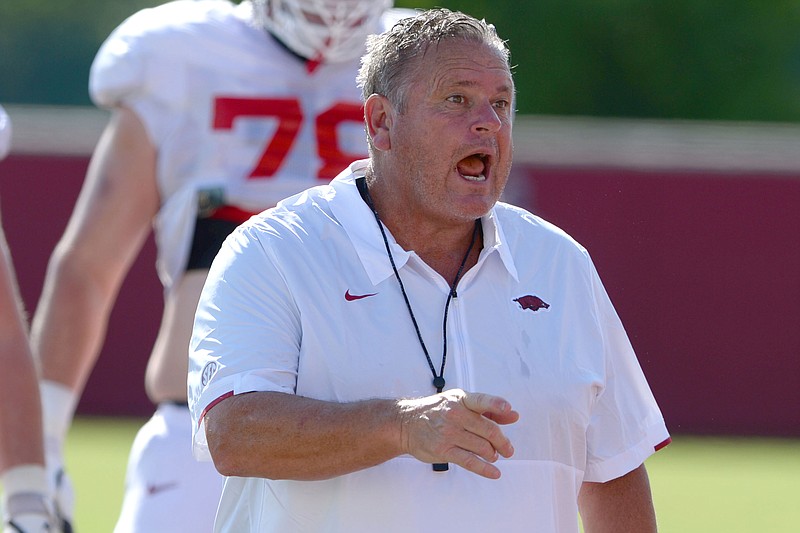 FAYETTEVILLE -- A milestone for University of Arkansas football the past dozen years has been the preseason NWA Razorback Kickoff Luncheon, usually held at the Springdale Convention Center, in mid-August.

The event was staged again Friday in a fashion wholly appropriate for current times. The luncheon was done virtually.

UA Athletic Director Hunter Yurachek opened the proceedings with a message to Razorback Foundation members and supporters, and the voice of the Razorbacks, Chuck Barrett, conducted a combined interview with coordinators Barry Odom and Kendal Briles followed by a 10-minute chat with first-year Coach Sam Pittman.

The ongoing coronavirus pandemic prevented the annual luncheon from taking place in person, two weeks and a day shy of the Razorbacks' season opener at home against Georgia on Sept. 26.

Pittman and his coaching staff spent their office hours on Friday, among other things, putting final preparations on the Razorbacks' mock game, an early morning affair today at Reynolds Razorback Stadium.

That event, essentially a game-day rehearsal, will focus on pregame staging, special-teams work and coordination, and in-game scenarios such as sudden changes after turnovers.

"We'll start at 7 a.m. and we'll eat pregame, then we're going to go over to the stadium and we're going to walk in just like we would on a Saturday," Pittman said Thursday evening.

The kickoff luncheon, which featured between 200 and 260 online visitors based on the number of RSVPs received by the Razorback Foundation, did not fail to recognize the day on which it was held.

On the 19th anniversary of the terror attacks on the United States, viewers of the virtual luncheon were shown a tribute to first responders put together by Charlie Parsley and Jack Parker of the Razorback Sports Network, and Brooks Cockrell, assistant director of football video.

Cockrell also created a hype video overlaid with Pittman talking about the kind of program he wants to create, while Michelle Glover's team with the Razorback Sports Network put together a practice compilation video featuring some of the highlights of camp.

Yurachek thanked the supporters of the department's 465 athletes and promoted Pittman and the season opener against Georgia.

"It is doubtful if any other head coach has had to deal with such adversity before he even had the opportunity to coach his first football game," Yurachek said. "No spring practice, delays, postponements, and from what was the toughest schedule in the nation to, in my opinion, the most challenging schedule in the history of all of college football.

"Yet through it all, Coach Pittman has remained upbeat, focused, and determined to prepare his Razorback football team for the upcoming season. That is who Sam Pittman is and it's just one of the many reasons we are proud to have him as our head football coach."

"They want to erase what's happened in the past and do something great for our great fans of Arkansas," he told Barrett.

Because of the possibility of players or units being sidelined by either a positive coronavirus test or contact tracing, Pittman said the Razorbacks have been notably alert.

"I think this year more than any gives an opportunity for a young man that might be a third-team guy to go, 'Hey, you know, coming up Saturday, I may be on the first team,' you know," Pittman said. "So I think more than ever you're maintaining the attention of all the fellas at all different levels on the depth chart. So obviously if you're maintaining attention you're obviously going to have a chance to be a better football team."

The Razorbacks have gone through 14 preseason practices of the allowed 25 before the start of the season at a much more leisurely pace than normal after a few months of virtual meetings and walk-throughs.

"The last couple of weeks has felt a little bit like fall camp," Briles said. "We've had a little bit more time between practices and a little less time with the guys, but I still think we've been able to find common bonds and get enough work done where we're keeping our guys healthy and still getting what we need on the field."

Said Odom, "You look back at the progress they made putting it into play over the virtual world and then now of the reality of what we've been able to do the last couple of weeks on the field. They've retained the information, and they've been eager in really everything we've put out in front of them.

"They've accepted the challenge. We're excited about our group. Like Kendal was saying, two weeks from tomorrow we get to kick if off and we're excited for that opportunity."

Mock games have been taking place for many years to help teams get a feel for the pace, flow and execution on game days. Pittman and his staff will use it to accentuate the kicking game and get in a bit more scrimmaging.

"That's more for special teams, how we do things, how we're going to come out of the locker room and all the pregame things," Pittman told Barrett. "Then we'll get into the meat and potatoes of about a 66-play scrimmage/walk-through combination.

"Then, Monday, Tuesday, Wednesday, we'll go back to work. Those are work days."