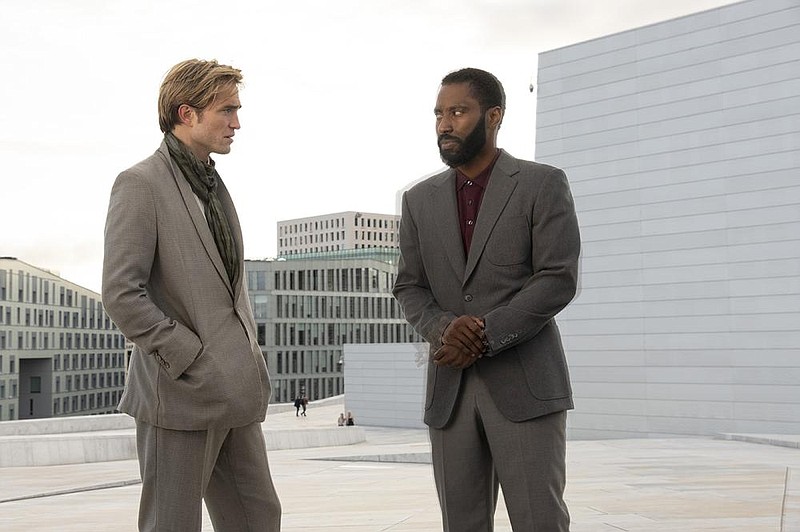 This image released by Warner Bros. shows Robert Pattinson (left) and John David Washington in a scene from “Tenet,” which came in at No. 1 last weekend with $20.2 million in U.S. and Canadian receipts. (Melinda Sue Gordon/Warner Bros. via AP)

NEW YORK -- In a litmus test for American moviegoing in this covid-19 pandemic, Christopher Nolan's "Tenet" brought in an estimated $20.2 million through the holiday weekend in U.S. and Canadian theaters.

The result could be greeted as either the rejuvenation of U.S. cinemas -- more Americans went to the movies last weekend than they have in nearly six months -- or a reflection of drastically lowered standards for Hollywood's top blockbusters given the circumstances.

About 70% of U.S. movie theaters are currently open; those in the country's top markets, Los Angeles and New York, remain closed. Theaters that are operating are limiting audiences to a maximum of 50% capacity to distance moviegoers from one another. "Tenet" played in 2,810 North American locations, about three-fourths of what most major releases typically launch in.

Theater chains, meanwhile, are struggling to remain solvent. Exhibitors have argued that they need new films to survive. Last weekend offered the first significant opportunity for U.S. cinemas to convince moviegoers to come back.

Three states (New York, New Mexico and North Carolina) remain no-go zones for indoor theaters. Six other states, including California, have partly opened. California Gov. Gavin Newsom recently said indoor theaters could reopen in counties that meet certain thresholds, provided they limit capacity to 25% or 100 people -- whichever is fewer. Exhibitors scrambled to reopen in San Diego, one of the few areas in the state that qualified in time for "Tenet."

"We are very pleased with the initial results [for 'Tenet'], with 65% plus of U.S. markets open and social distancing reduced seating capacities," Warner Bros. said Sunday in an email. "But we always knew this release plan would be a marathon, not a sprint, as we await openings in more markets and theaters in the coming weeks."

Warner Bros. declined to split up U.S. and Canadian box office receipts. Theaters in Canada, where covid-19 cases are much lower than in the United States, began showing "Tenet" a week earlier. The film debuted stateside with nightly preview screenings Aug. 31-Sept. 2 before the official opening on Sept. 3. Warner Bros. included all of the above in its estimated gross through the holiday Monday.

Not in the film's favor: Audiences didn't love Nolan's latest time-bender. Moviegoers gave the thriller, starring John David Washington, Robert Pattinson and Elizabeth Debicki, a "B" CinemaScore, the lowest grade for a Nolan release since 2006's "The Prestige." Reviews (75% positive on Rotten Tomatoes) have been good but far from overwhelming.

Analyzing the film's performance was virtually impossible, said senior media analyst Paul Dergarabedian for data firm Comscore. He acknowledged North America remains a more challenged marketplace than Europe or Asia, but called it a solid start in what will be lengthy run for "Tenet."

"It's going to take a longer time to assess this," Dergarabedian said. "The win is just to have movies open. To me, that says a lot."

Hollywood is watching closely. With the majority of the studios' top productions delayed until next year, the industry is experimenting with how to release its most expensive movies in the covid-era. The Walt Disney Co. last weekend also debuted its $200 million live-action "Mulan" remake, but did so as a $30 purchase for Disney+ subscribers.

Disney on Sunday didn't share digital returns for "Mulan" -- a practice common among streaming companies and previous anticipated VOD releases such as Universal's "Trolls World Tour" and Disney's own "Hamilton." But "Mulan" is also playing in theaters in some overseas territories. It began with $5.9 million in Thailand, Taiwan, the Middle East, Singapore and Malaysia. Next week, it debuts theatrically in its most important market: China.

Disney's "The New Mutants," a long delayed "X-Men" spinoff, collected about $7 million in 2,412 locations two weekends ago. Dipping significantly in its second weekend, it has made $12.3 million through the holiday weekend.

Also in its second weekend, LD Entertainment and Roadside Attractions' "Words on Bathroom Walls" added $282,370 across 1,168 screens for a per-screen average of $242 and a cumulative $1.5 million. And Searchlight Pictures' "The Personal History of David Copperfield" added a cumulative $1.1 million through the holiday.

Atlas Distribution Company opened "My Brothers' Crossing" in 73 locations to $17,350.

This weekend, Columbia's romantic comedy "The Broken Hearts Gallery" is slated for a wide release and IFC Midnight will open the thriller "Rent-A-Pal" in limited release.