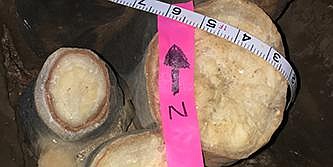 This National Park Service photo shows the damage to formations in Fitton Cave in Newton County after vandals chipped out and removed several cave formations, including stalagmites and draperies, in June. (Special to the Arkansas Democrat-Gazette)

They removed several cave formations, including stalagmites and draperies, said Cassie Branstetter, a spokeswoman for the Buffalo National River.

It took thousands of years for water and minerals to create those formations, said Stephen K. Boss, professor of environmental dynamics and sustainability at the University of Arkansas, Fayetteville.

"Vandalism in a cave like that is unacceptable behavior," he said. "Those are irreplaceable on a human time scale."

Boss said cave draperies are named for the household items they resemble. He said smaller, translucent formations that have colored bands are called "cave bacon" for a similar reason.

Branstetter said the culprits could face 10 years in prison and fines for damaging government property and violating the Cave Protection Act of 1988.

In a photograph from the National Park Service, the base where one of the stalagmites was removed appears to be about 6 inches in diameter.

The amount of damage is still being assessed, Branstetter said.

She said a news release went out Thursday morning, and officials had received some tips by midafternoon. Anyone with information about the vandalism is asked to call the National Park Service Investigative Services Branch tip line at (888) 653-0009 or go online at www.nps.gov/ISB. Tips can be made anonymously.

"The Fitton Cave system is one of the largest in Arkansas and holds a variety of rare cave formations," according to the news release. "It is also the second most biologically diverse cave in the state. Like all caves in Buffalo National River, Fitton Cave currently is closed to the public due to White Nose Syndrome, a deadly fungus that can kill bats and be spread by people entering and exiting caves."

The damage was discovered last month.

Branstetter said the cave has been closed since 2009.

Mike Mills said closing the cave north of Erbie has made it more vulnerable. Mills is founder of the Buffalo Outdoor Center in Ponca and a former state tourism director.

When the cave was open, people had to get permits to enter the cave, Mills said. But at least people were in the cave, and that discouraged criminal activity, he said.

"The daily use of that cave protected it because you had people in there," he said. "The public actually protected the resource. I'm sorry, but the Park Service literally asked for it. They need to open the cave back up to the people."

When informed of Mills' opinion, Branstetter said "The cave was securely closed and gated."

"I've seen in hundreds of caves, and Fitton is the best of the best," he said. "It's by far the best."

Mills said three or four large "crystal chandeliers" hang from the ceiling of the Tennouri Room (named for Tennessee and Missouri). He was referring to natural gypsum formations.

"They looked like upside-down Christmas trees," Mills said. "They were absolutely mesmerizing to look at."