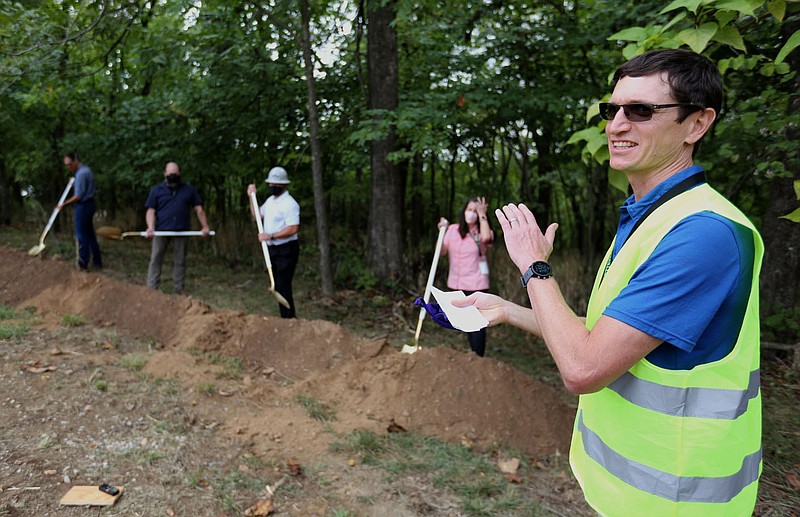 Peter Nierengarten, environmental director with the city of Fayetteville, applauds Thursday after the second group of four guests use sanitized shovels to turn dirt during a groundbreaking ceremony for the city's Cultural Arts Corridor in the Fay Jones Woods. The corridor is planned as a series of connected outdoor public spaces throughout downtown. Voters approved a $31.6 bond issue in April 2019 to make the project happen. Check out nwaonline.com/200911Daily/ and nwadg.com/photos for a photo gallery. (NWA Democrat-Gazette/David Gottschalk)

FAYETTEVILLE -- Construction on the arts corridor downtown officially got under way Thursday.

About 40 people, consisting of city leaders, staff, designers and residents, attended an outdoor groundbreaking held at the Fay Jones woods west of the Fayetteville Public Library. Attendees wore masks and were instructed to maintain social distancing because of the coronavirus pandemic.

The city received a nearly $1.8 million grant from the Walton Family Foundation in 2017 to design the arts corridor downtown. Landscape architecture firm Nelson Byrd Woltz in Charlottesville, Va., was hired a year later to lead the design team. Voters approved a $31.6 million bond issue in April 2019 to build the corridor.

"From the very beginning, this land was envisioned as a park," Crocker said. "It was to be near the Blair library, with the Razorback Greenway trail traveling through it."

Work to remove invasive plant species from the seven-acre wooded began about a year ago. Native plants will replace the ones removed. Small spaces will lie among the trees where people could gather or perform. The Tanglewood Branch stream will be restored, with a canopy bridge running across connecting the Razorback Greenway with Gregg Avenue to the west. People will have places to sit and gather at a natural area near Gregg Avenue. Soft-surface trails will run throughout.

Nierengarten said experiencing nature as art was at the core of the design for the new Fay Jones woods.

"I think it's a really exciting opportunity for residents and visitors to the community," he said. "It creates enough spaces to enjoy for passive recreation, and it's also really a canvas for artistic expression."

Toward the end of the year, the existing asphalt of the Razorback Greenway running through downtown will be replaced with concrete and new lights. Trail users will have to be redirected during construction, most likely to Gregg Avenue from Center Street, Nierengarten said.

Work on the Fay Jones woods, West Avenue and Razorback Greenway should wrap by late next year or early 2022. Construction on a parking deck at the northwest corner of Dickson Street and West Avenue should begin early next year. The deck will replace the 290 parking spaces lost when the parking lot west of the Walton Arts Center becomes a civic space. Construction on the civic space should start in early 2022.

Mayor Lioneld Jordan thanked everyone involved in development of the project, noting especially the voters who supported the arts corridor bond issue.

"This project is very close to my heart because it will give everyone an opportunity to enjoy nature, the arts, trails, culture, history and more, all in the heart of this great city," he said.

Jordan is seeking re-election to a fourth term as mayor in November, with challengers Tom Terminella, Ron Baucom and William Harris, who weren't in attendance Thursday. 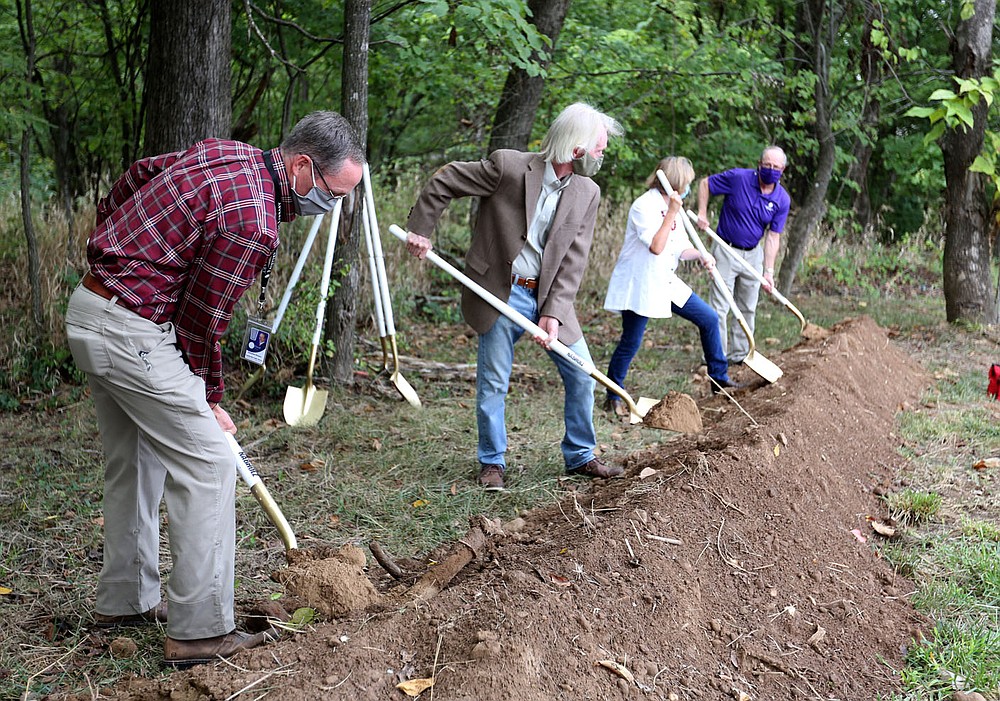 David Johnson (left), executive director of the Fayetteville Public Library, joins a group of four Thursday to use sanitized shovels to turn dirt during a groundbreaking ceremony for Fayetteville's cultural arts corridor project at the Fay Jones woods. The cultural arts corridor is planned as a series of connected outdoor public spaces throughout downtown. Voters approved a $31.6 bond issue in April 2019 to make the project happen. Check out nwaonline.com/200911Daily/ and nwadg.com/photos for a photo gallery. (NWA Democrat-Gazette/David Gottschalk)
More News

To learn more about Fayetteville’s arts corridor, go to: