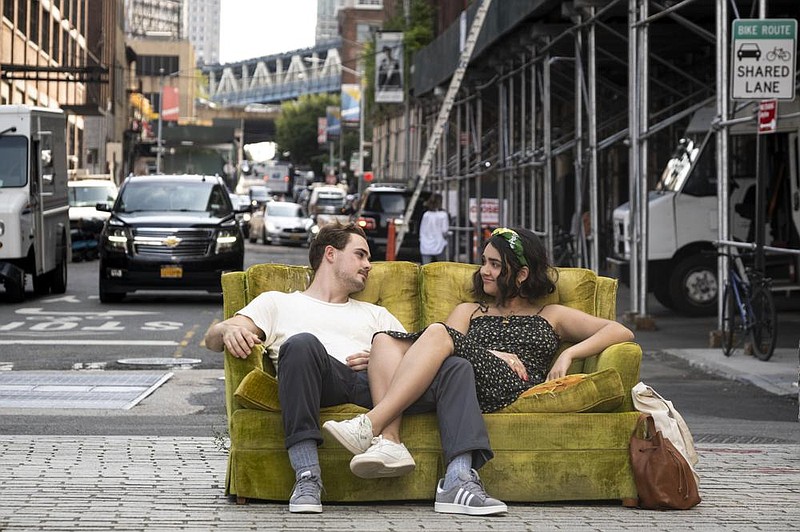 You don't have to buy a ticket to "The Broken Hearts Gallery" to know its content. If you didn't know writer-director Natalie Krinsky cut her teeth writing episodes of "Gossip Girl," you might wonder if she earned her living making copies at a FedEx Office store. She rigidly follows Checkhov's Gun dictum to the point that you can guess when the karaoke serenades or montages are about to occur.

When you hear names of locales in the film, it's a safe bet they'll pay off later, but when they do, the wait seems anticlimactic. It's more like the anticipation one experiences in the DMV instead of on Christmas morning.

Thankfully, leading lady Geraldine Viswanathan ("Blockers," "Bad Education") keeps the routine setup from feeling as rote as a politician reading from a teleprompter. In her hands the routine sequence where Lucy Gulliver (Viswanathan) gives a booze-fortified speech that ends her job and her relationship with an artist named Max (Utkarsh Ambudkar) is endurable.

As with many of the women in these sorts of comedies, Lucy has balance problems as well as challenges recognizing when her ideal mate is standing before her. Somehow, Viswanathan makes these tropes seem as if they're set in wet clay instead of stone.

In addition to having difficulty recognizing that Max can't commit, Lucy keeps dozens of odd objects that are mementos of her past relationships. To her it seems rational to hang to one of Max's discarded ties on a wall as if it were a work of art.

Apparently, she's not the only New Yorker who has held on to a piece of a dead love affair. Lucy starts posting trinkets others have given her in a space of a hotel under construction. The proprietor named Nick (Dacre Montgomery) isn't that crazy about having part of business devoted to objects that even junk dealers can't sell.

Of course, Lucy and Nick are destined to end up together because they've met cute in his car five minutes into the movie. Their pairing seems more like a shotgun match than a genuine romance. Nick seems a bit too stodgy to be happy with someone like Lucy who's so open and prone to whimsy. When Nick's friends nudge him into noticing Lucy, it's questionable whether they're doing the two of them a favor. Montgomery comes off as more blankly handsome than soulful, so that makes the match less convincing.

Krinsky surrounds her potential lovers with a largely forgettable set of friends and coworkers. Because the real Big Apple is full of lively, distinctive and engaging people, that's a problem for a movie set there.

It's reassuring to see Bernadette Peters popping up as a prominent gallery owner. Curiously, Krinksy sticks her and the rest of the cast with surprisingly flat zingers to deliver. Peters' character may ensure that masterpieces have a space on her walls, but considering the fact that Peters has been in Stephen Sondheim musicals, it would have been nice if her lines were half as clever as his lyrics.

In many ways "The Broken Hearts Galley" is a lot like the objects the title institution contains. It has little value outside of what the donors have put into it. It takes a little more effort and inspiration to make something that improves on what a blank screen and imagination can do.

Rating: PG-13, for sexual content throughout and some crude references, strong language and drug references.