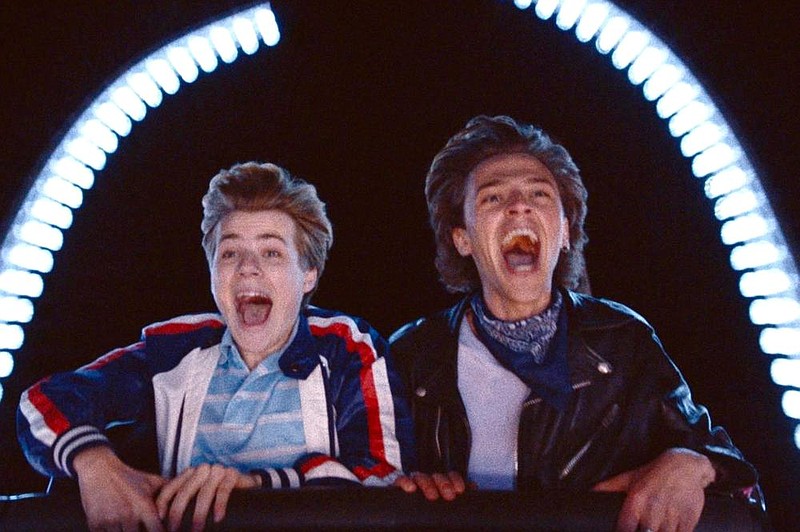 Benjamin Voisin and Félix Lefebvre are two 16-year-olds who meet while vacationing on the Normandy coast in François Ozon’s highly anticipated “Summer of 85,” which will screen at the Toronto International Film Festival.

In an egregiously horrific year in which, as Roger Waters once sang, "nothing is very much fun anymore," film festivals are between a cyclone and an erupting volcano: Cancel the festival entirely -- as Cannes and Berlin were forced to do -- and let films poised for international acclaim wither on the vine or go ahead and come up with some sort of reduced and watered-down virtual version that's like a vegan, gluten-free version of a cupcake, edible but uninspiring.

The fall festival majors -- Venice, New York Film Festival, and Toronto International Film Festival -- have each opted for some version of the latter scenario, and directors, publicists, and studio heads everywhere are allowing a little bit of air back in their lungs as a result.

Toronto is doing a mainly virtual festival, with very limited theatrical screenings for Torontonians willing to venture indoors again. As far as the international press goes, it's virtual and homebound (nobody outside Canada is allowed in), which makes for a peculiar mixture of all-day screenings, while still having to make your kids grilled-cheese when they get hungry.

Still, even a fractured festival is better than no festival at all. Toronto is running a considerably spare program compared to normal (about 50 features, down from 320+), but there's still plenty to see. Here are 10 of the films we're most looking forward to watching from our living room couch.

"76 Days": As inevitable as the spread of the covid-19 virus across the world has been, so too has become the reaction of documentary filmmakers, sensing a seismic, humanity-changing event, to capture the story and bring some sense of explication for what has become the worst infectious outbreak since the Spanish Flu nearly a century ago. Chinese documentarian Hao Wu works alongside Weixi Chen, and a host of other sources, to present a frontline view of the virus as it first went from Wuhan open market to city-wide terror in a short period of time. Part of me doesn't want to see it -- don't we have enough pandemic already? -- but it couldn't be more timely.

"Ammonite": Generally, Toronto has been the starting gate for many an important, award-hopeful film, with big-name stars and heady, emotionally volatile studio presentations, but this year, the reduced slate has relatively few such examples. This film, however, from Francis Lee, stars luminaries Kate Winslet and Saoirse Ronan as a pair of forsaken women left alone on a forlorn English coast, who find romantic love for each other, amid the formidable bleakness of the region. Expect emotional fireworks from this pair of powerhouse actresses and the obligatory conjecture about their award chances.

"Another Round": Back in 2018, when I interviewed the brilliant Danish director Thomas Vinterberg for his submarine picture, "Kursk" (aka "The Command"), he mentioned in passing the fun he was having in making his next film, which featured previous muse Mads Mikkelsen drinking his face off. That film, about four male high school teachers who agree to spend a day getting absolutely soused and maintaining their blood-alcohol level at precariously high levels as sort of a philosophical experiment, has now come upon us. After making the superlative "The Hunt" together, I would watch whatever they next made with high anticipation anyway, but this one sounds pretty fantastic just the same.

"Bruised": Toronto also has a way of showcasing stars' vanity projects from time to time -- "The Judge," anyone? -- so it's hard to tell if the inclusion of this film, a fighter-redemption piece from first-time director Halle Berry, also the film's star, reveals a startling new directorial talent, or just a payback opportunity for the Oscar-winning actress. I will very much hope for the former but be prepared for the latter. It is categorized as still being "in progress," so whatever version we see might not reveal the full truth, but we should at least be able to see what direction it's headed in.

"City Hall": Frederick Wiseman's in-depth documentaries are always a cause for celebration, and the newest offering from the venerable director is certainly no exception. This massive effort -- going for 4 hours and 32 minutes! -- documents several months deep inside the cauldron of Boston city politics, portraying the mayor, Marty Walsh, and the inner circles of power that govern the city, as the leaders grapple with issues of inequality and discrimination in a town with a longstanding rep of racial intolerance.

"Concrete Cowboy": Another potential break-out possibility exists for Ricky Staub's drama about a difficult teen (Caleb McLaughlin) who is forced by his mother to move from Detroit to Philadelphia, where his father lives, in order to get his act together. Once in Philly, the kid's dad (Idris Elba) introduces him to the (real-life) Philly tradition of the urban cowboy, wherein Black people take their love of riding horses to the North Philly streets.

"Nomadland": Chloé Zhao's much-lauded "The Rider," was one of the very best films of 2017. Her latest is one of the biggest-deal films of this year's reduced festival circuit (where it's also headlining at New York and Venice). It stars Frances McDormand as a rootless woman traveling around the American West in a battered RV, doing seasonal jobs and living the life of a vagabond with certain relish. That is, right up until she meets a small community of like-minded people, and with one such man (David Straithairn), has perhaps found a particular soul with whom to share her journey.

"One Night in Miami": Here, we have another big-time actress making her feature directing debut, but Regina King's film comes out swinging for the fences. It's about a fictionalized evening of celebration between Malcolm X (Kingsley Ben-Adir), Sam Cooke (Leslie Odom Jr.), Jim Brown (Aldis Hodge) and a boxer then known as Cassius Clay (Eli Goree), after the latter's huge win over Sonny Liston, which made him the official champion of the world. The ultra-talented King, who was a revelation in "If Beale Street Could Talk," has certainly not shied away from the challenge of thinking big. We will see whether the gamble pays off, but I'm certainly pulling for her.

"Summer of 85": The comparisons are already flying thick and heavy between François Ozon's film, about a pair of teenage boys in the '80s, who meet and fall in love on summer vacation at the Normandy coast, and the similar "Call Me By Your Name," but that's certainly not bad company to be in. Still, the film, which sounds a lot more like an obsessional drama than a beautiful love story, sounds fascinating, and the highly talented Ozon is more than capable of pulling off a multi-genre piece that echoes from tragic romances past.

"The New Corporation: The Unfortunately Necessary Sequel": Back in 2003, Mark Achbar and Jennifer Abbott made "The Corporation," a defining documentary about the rise of corporate interests over society itself, using the questionable legal decisions that granted them rights as a citizen and the heavy price we pay as a nation in service to them. It was sobering, to be sure, but offered necessary insight into the insidious way the corporate behemoths operated. Now, as the title suggests, Abbott and Joel Bakan offer new horrors for us to contemplate, especially in the wake of the 2008 economic meltdown, where corporations have since tried to bolster their image as being more socially conscious.