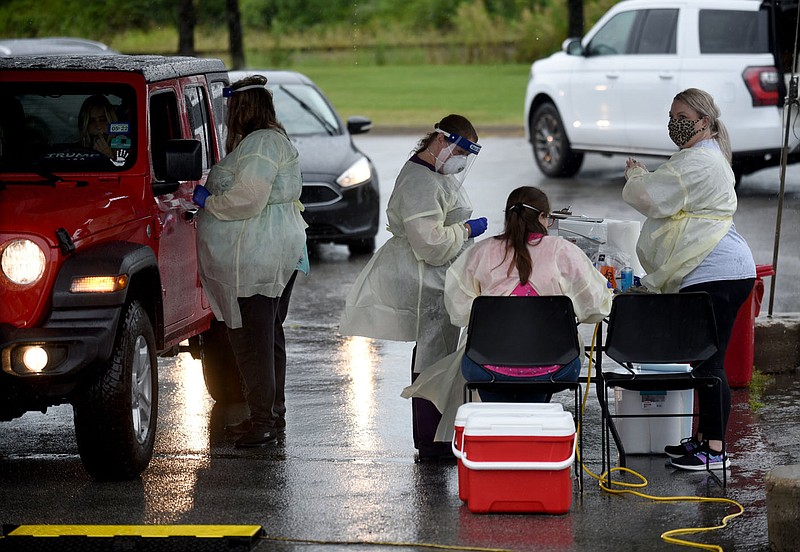 Health care providers participate Sept. 1 in a drive-through covid-19 testing clinic set up across from Baum-Walker Stadium at the corner of South Razorback Road and West 15th Street in Fayetteville. The city's board of health is asking for daily countywide antigen test results, in addition to the regularly reported daily PCR rest results, to get a better picture of covid activity in the community. (File photo/NWA Democrat-Gazette/Stacy Ryburn)

FAYETTEVILLE -- The city board of health needs daily antigen test results at the county level to make informed recommendations to city officials during the covid-19 pandemic, its members agreed Wednesday.

Antigen tests have results available quickly, and are designed for people showing symptoms. The polymerase chain reaction, or PCR, test can take up to a few days to get results back. The number of daily positive cases the state releases are the PCR tests.

However, "probable" means a 95% likely confirmed case, she said.

City board members agreed Wednesday they don't care if the two test results are separated or consolidated, but making countywide antigen test results available would be helpful. The board has no regulatory authority beyond what the state permits, but can make recommendations to the City Council and city administration on how best to handle the pandemic.

Marti Sharkey, the city's public health officer, said she's been tracking antigen test results from a few local clinics. However, the results don't indicate whether the positives are coming from people who live in the city, she said.

Isolating positive test results within the city is difficult because even people who list a Fayetteville address may live outside the city, Fire Chief Brad Hardin said. Using ZIP codes also would include several areas outside the city, he said.

The board agreed getting the antigen data for Washington County every day, along with the PCR test results, as the state Department of Health already reports, would paint a clearer picture of covid activity in the community. The board asked Sharkey to send another letter to Hutchinson requesting the information be made available publicly.

"A positive is a positive," said Board Member Huda Sharaf, medical director of the Pat Walker Health Center at the University of Arkansas. "They could make this very easy and just report positive results."

Hershey Garner, chairman of the city board, asked if schools could be considered as community testing sites. Fayetteville Public Schools have no on-site testing, he said.

"That is just not a workable solution," Garner said.

A webpage has launched with regular updates from Fayetteville’s public health officer, Dr. Marti Sharkey, at: