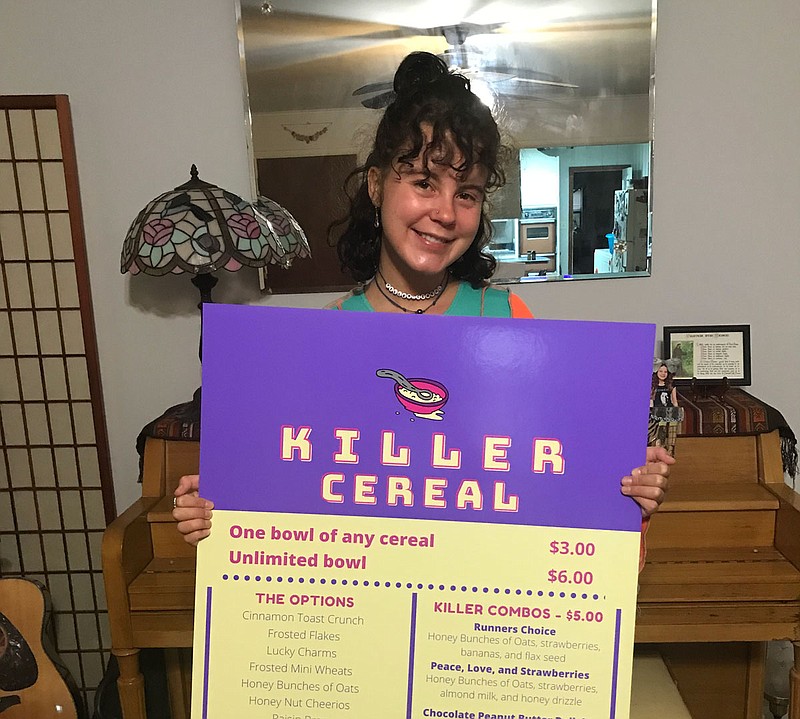 Answering the question "What do you want to be when you grow up?" isn't easy for everybody; some of us are still pondering the question well into adulthood. This week, we talked to three young Northwest Arkansas movers and shakers who seem to have it all figured out before they even hit college.

Math and science have been Libby White's favorite subjects since she was 7 or 8, she says, but it was the mystery of the stars that really captured her imagination.

"I've actually spent a lot of time researching in my school's library -- I used to spend my whole time reading every space book," the Bentonville fifth-grader says. "The No. 1 thing that I find fascinating about space is that it never ends. I just love it so much because you can never stop exploring it -- there's always something else to learn."

So, naturally, Libby's No. 1 career goal is to become an astronaut, to spend her life exploring the limitless potential of the universe. She's had her eye on NASA's Space Camp for years, and, this year, was finally old enough to go.

"I was really worried," she admits. "Every time I would get excited, my mom would say, 'Now, it may not happen.'"

But with precautions put in place -- Libby says she and the other students sometimes wore their masks up to 15 hours a day -- she was finally able to fulfill her dream to complete Space Camp this summer.

"Back when I was too young, I used to get on the Space Camp website and read about what I would do," she says, getting so excited that "back in December, I said, 'Let's start packing now!'"

The real experience did not disappoint.

"There's a thing called the MAT -- the Multi-Access Trainer -- it spins you around and around in every single possible angle," she says. "That was the best part. It was the most hands-on experience."

Space Camp did nothing to dim Libby's passion for becoming an astronaut -- in fact, it only cemented her plans -- and her mother found her a small telescope for $15 on Facebook Marketplace when she got home, which she's put to good use out in her back yard. She focuses it on planets and stars and invites her best friend over to photograph what she's found.

"She isn't that interested in space, but she likes to get photos of what she sees when she looks through it," says Libby.

Libby has joined an astronomy club as its youngest member.

And something even more exciting has happened recently: When her mom took her to Explore Scientific, a store that "was founded to make astronomy, microscopy and exploration of nature accessible and affordable," according to its website, to purchase her a higher-powered telescope, her interest inspired owner Scott Roberts.

"He said, 'We have to get more young scientists to come and carry the torch for space study, or NASA won't have a program anymore -- and there's a whole universe out there to explore,'" Libby remembers. "He was really happy and said, 'If you're really serious about this, I'll sponsor you a 10-inch telescope."

He also invited her to be a part of Explore Scientific's Virtual Global Star Parties, a streaming Zoom call where prominent members of the scientific world chat about astronomical issues of the day.

"He's sponsoring me to get more kids interested," she explains, adding that the hope is that she will eventually have a brief segment of the call where she takes questions from other kids.

"It will be called 'Libby in the Stars' and I'll be teaching lessons about space every week," she says, adding that the lessons might be pre-recorded but her answers to viewers' questions will be live.

Libby is attending virtual school, as she's been doing since mid-March; she says that fifth grade requires a lot more Zoom meetings than fourth grade did. But, she says, when she considers covid-19 precautions in context of what's required by astronauts, it's not so bad.

"If you go to the International Space Station, you'll be in space for almost six months," she says. "We've been in quarantine for over half a year, but imagine being quarantined with nobody."

For some Walt Disney World fans, the iconic amusement park's icy delight Pineapple Dole Whip is synonymous with the classic Disney vacation. It might come as a surprise to some that the delicious concoction is available outside the Disney walls, right here in Northwest Arkansas; it will probably come as a bigger surprise that the reason it's available is the business acumen of a duo of teenage brothers.

"The best ice cream we ever had was when I was in second grade," remembers 16-year-old Andrew Hull, who opened up the Crazy Willy's Ice Cream truck with his older brother, Michael, because, as he explains, "We thought opening up a lemonade stand might be cliche."

"My dad went into the Naval Reserves and got flown out to Hawaii to work at Pearl Harbor Naval Base," he continues. "We drove out to the middle of nowhere, where all of these Hawaiian pineapple trees grew as far as the eye could see. It was the Dole Plantation, and we had the pineapple ice cream. I've never had it since, but I said, 'If we're going to sell ice cream, let's sell that.'"

Andrew says he and his brother have wanted to open a business for around a year now.

"My parents said they would let us if we had the money saved up," he explains. "My brother has a job at the local supermarket, and I work for my mom in the Bella Vista Neighbors Real Estate Group. I did a lot of paperwork."

The hard-working teenager also saved his money for a car at the same time.

"It was difficult for me to do," he admits.

The duo found a prime location for their truck -- they're located next to the Veterans Wall of Honor at 103 Veterans Way in Bella Vista. Their experience in business, so far, has been overwhelmingly positive.

"We officially opened up on July 4th," says Andrew. "It was really stressful. We did a soft opening a few days before, and we had just learned how to make ice cream cones. We had tons of people down in that park, launching fireworks -- it was our busiest day of the summer so far."

Andrew, who plans on the ice cream truck being the first of many ventures, says the experience has taught him a lot about owning a business.

"There are a lot of things that turned out to be more challenging than I first thought," he admits. "There are all sorts of little things that I didn't think of. We thought we would hand out ice cream, and people would stand around and eat it and be happy, but on July 4th, there was no place to sit. There are park benches, but they're few and far between. So we went down to Lowe's to try and find some lawn chairs."

The family eventually had to drive to Neosho, Mo., and back to find enough of the kind of chairs that would be useful to the business.

"But, 100 percent, it's going to help me get into college -- just saying that I did something like this is going to make me so much more appealing, especially with the things that I've learned how to do," Andrew goes on. "Inventory, figuring out how to do payroll, all of these things will help me because I'm trying to get a business degree. I'm taking college classes through high school, and it's really helping me in my business classes, because I already know how to do the things they're teaching me to do."

But more than that, he says, the business of selling something that makes people happy is very fulfilling.

"It's fantastic," he says, enthusiastically. "It's the perfect summer job. One of the great things is that the flavors are dairy free except for vanilla. If people come up, and they're lactose or vegan, to see the smile on their face as they eat the Dole Whip, it's great. We had an 8-year-old come in, and it was the first 'ice cream' she'd ever had because she's deathly allergic. So seeing their faces is so amazing."

Blue Brasher has been taking ballet lessons since she was 3. She's been a songwriter since she was in elementary school and, last year, recorded and released a CD of her own original music. She's had various business ventures throughout her childhood, including lemonade stands and a jewelry business. An avid environmentalist, she collected artwork from kids across the country that expressed environmental themes and displayed them in various venues across Northwest Arkansas in order to raise awareness of issues like ocean pollution and plastic waste. And in August, she opened her own business: a food truck called Killer Cereal that serves a wide variety of the sugary cereals we all remember fondly from our childhood.

Oh, and she just graduated from Fayetteville High School this spring.

Despite her obvious business acumen, Blue was all set to head off to Pepperdine University this fall as a pre-med student when covid-19 precautions made her change her plans. So she used some graduation money and the money she had made from her CD launch to open a business she had been dreaming about since she was 12.

"I always thought it would be fun to have a cereal restaurant," she explains. "It was always my favorite food. I grew up not being allowed to have sugar cereals, so it was always a treat when I did have it."

After striking up a conversation with a food truck owner out at Lake Fayetteville, Blue learned the woman was thinking about selling her truck. It seemed like kismet, and in mid-August, she opened Killer Cereal.

"It's been great so far," she says. "It's a lot of fun. I'm actually thinking about moving locations. I've been trying to figure out what would be the best move. I thought it would be fun to have a cart on Dickson; I feel like that's a place where people would really want some cereal."

She's learned a lot about starting her own business, but, she says, there was one thing in particular that was unexpected.

"[Concern for the] environment is a big thing for me," she says. "I've incorporated that as much as possible with disposable spoons and recyclable bowls. That's important to me. That's one thing that I didn't think about with business -- plastic bowls are so much cheaper. But I had a moment where I thought, 'I can't sell out and get the cheaper ones.'"

Everything Blue has done before Killer Cereal -- and she's done a lot -- she's done with the pressure of doing well in school and keeping her grades up in the background.

"It's kind of nice to have a year off school," she muses. "I've always had to focus on having straight As, but now, I'm able to focus on solely on my projects." 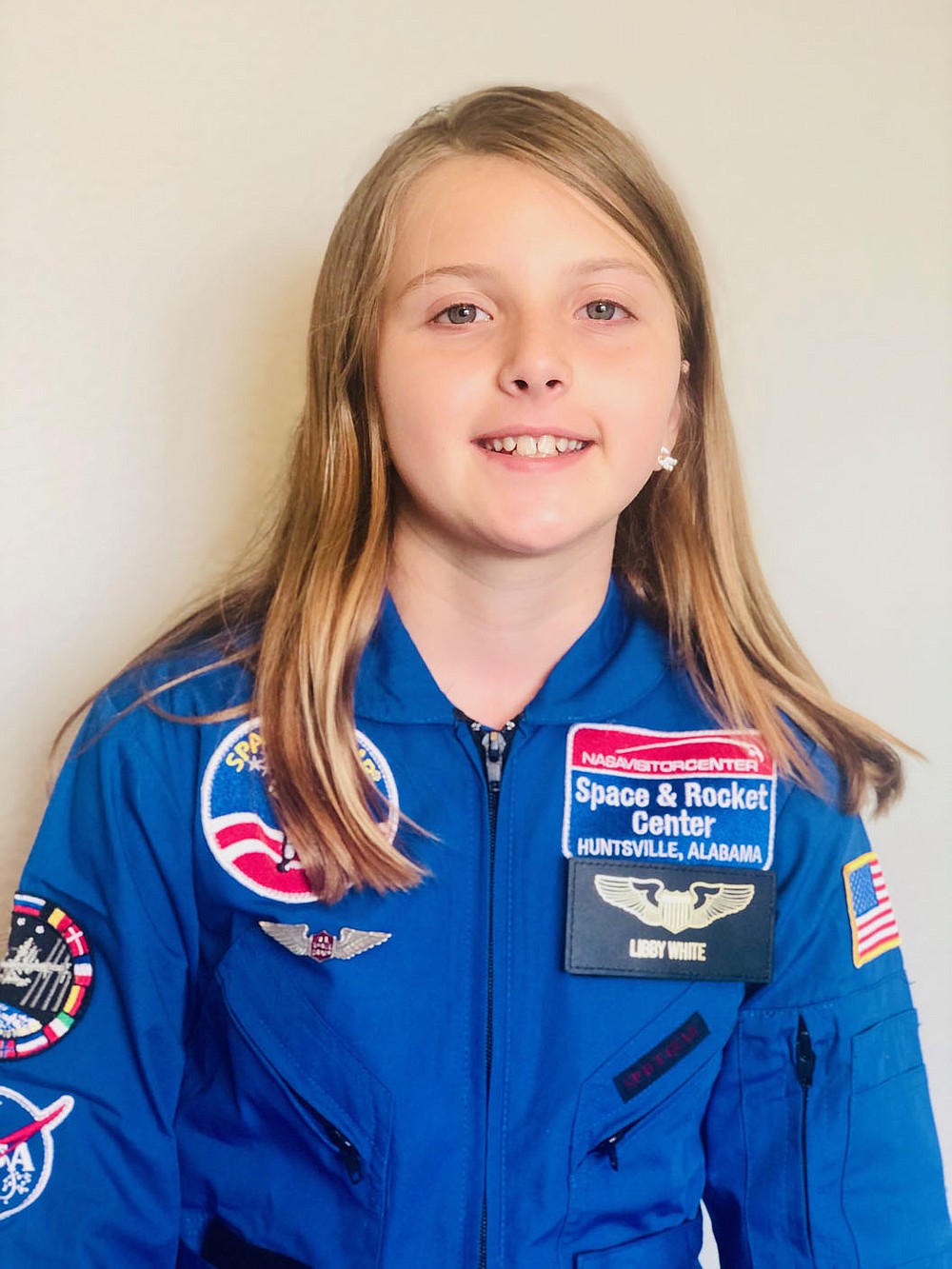 Libby White, a fifth-grader at Bright Field Middle School in Bentonville, has her head in the stars, and she probably knows more about astronomy than you do. This summer, she completed NASA’s Space Camp. (Courtesy Photo) 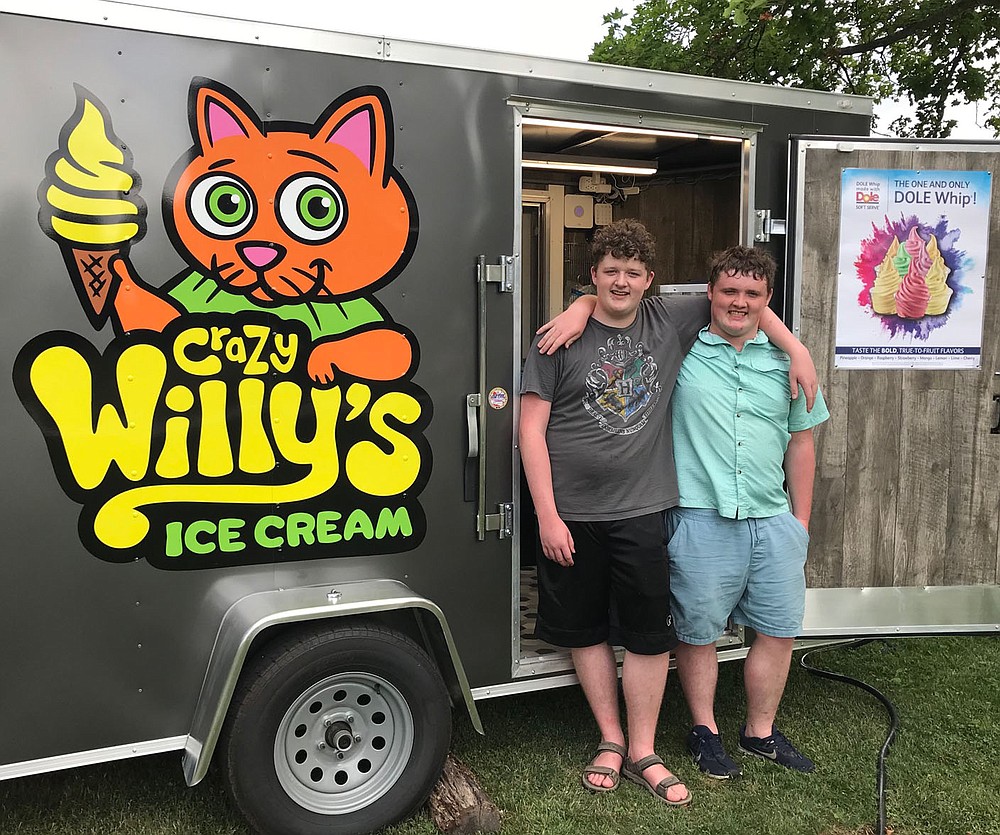