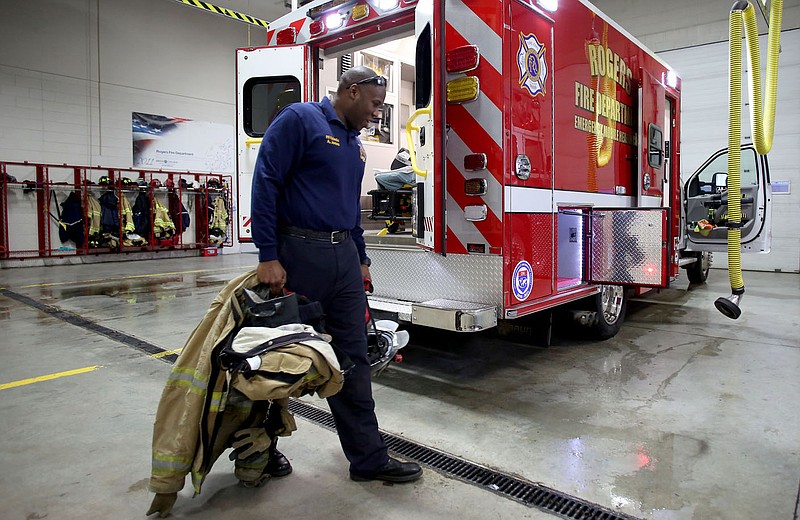 NWA Democrat-Gazette/DAVID GOTTSCHALK Al Jones, Rogers firefighter and medic, stows his fall-out gear Frida on Medic 1 at Fire Station No. 1 at the beginning of his shift.

The City Council on Tuesday voted to accept a $600,000 Staffing Adequate Fire and Emergency Response grant from the U.S. Department of Homeland Security.

The firefighters will work in the heavy rescue and hazardous material unit in Fire Station No. 2 on West New Hope Road.

The council also approved the Fire Department's request to enter into an agreement with Pafford Medical Services for ambulance services.

The intent is for the Fire Department's staff and ambulances to be reserved for emergencies and to avoid buying more ambulances and hiring more staff for non-emergencies, Jenkins said. The city will not pay for the agreement with Pafford. Pafford will bill the patients it serves. The department began a similar agreement with Mercy Health System in 2017, but Mercy is no longer available, Jenkins said.

The council also voted to amend the 2020 budget to include an additional $42,192 for a new house at the Rogers Cemetery. The city allotted $155,000 in 2019 to build a new house for the on-site cemetery manager. David Hook, facilities manager, said the house cost more than the city's original estimation.

The council held its meeting via Zoom, a video conferencing service, in light of the covid-19 pandemic.

• A request by Hutton Multifamily to rezone about 14 acres off South Champions Drive from agricultural to a mix of the uptown neighborhood transition and the uptown commercial mixed use zoning districts.

• A request by Potato Chip Factory to rezone about 0.4 acres at the southwest corner of South Second and Sycamore Streets from neighborhood residential to the neighborhood transition zoning district for a mixed use development with office and residential space.

• A request by First National Bank of Rogers to rezone property at 3706 S. Pinnacle Hills Parkway from highway commercial to the uptown core mixed use zoning district.

• A request by Storage World to rezone about 2 acres off West Industrial Drive from highway commercial to the light industrial zoning district.

• Amending the budget to spend $17,257 to continue operations of the Benton County Convenience Center Satellite Facility.