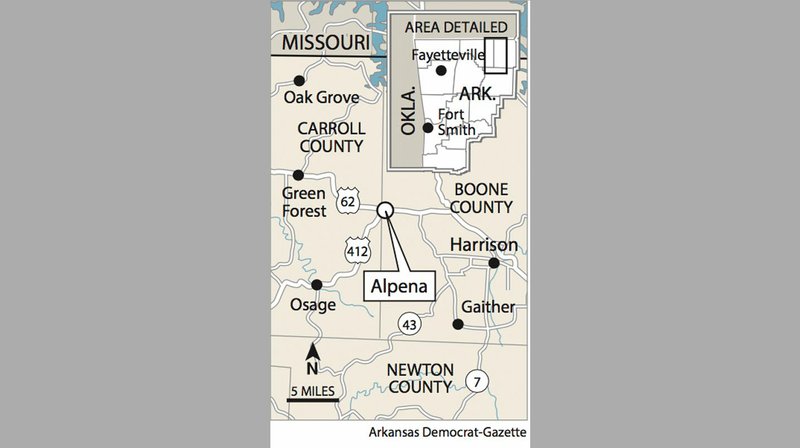 A map showing the location of Alpena.

A tree honoring Walt Record will be planted in Alpena City Park.

It will replace one that mysteriously disappeared a year ago.

Record, a former Alpena fire chief, died in 2003 at the age of 56. A bighearted "bear of a man," Record had a heart attack while preparing to help a man move some logs, according to the Carroll County News.

The Alpena Town Council approved the tree planting at its meeting Monday.

"I'm so thankful," said Robin Record Bell, Record's daughter. "At this moment I don't even have the words to describe how it feels that so many people were affected by the removal of the tree. My family is very honored that it's also important to the townspeople of our community to have a memorial of our Dad. He loved this small town, and they've proven to have loved him as much. We were all blessed to have had such a great man in our lives."

Mayor A.J. Womack said Plants Etc. of Harrison will donate at red maple tree for the park. It will be planted during a community park cleanup event on Sept. 26 in the very stump of the old tree that was cut down.

Sherrie Bryant, an Alpena native who owns Plants Ect., said the new tree is more specifically an October Glory. She said it's about 15 feet tall and will grow to 40-50 feet tall.

"It'll grow orange, and then it'll turn to red," she said of the tree's fall leaves.

Bryant said someone posted on a Facebook page for Alpena people that it would be nice if they could replace the tree that was removed.

"I had a beautiful one in stock," Bryant said. "And we knew Walt. We thought a lot of Walt. I actually went to school with his kids. Walt was loved by everybody."

Alpena, population 392, straddles the line between Boone and Carroll counties in the Ozark Mountains.

According to a 2003 article in the Carroll County News, Record was known for being the first on the scene at emergencies in Boone and Carroll counties. He had been a volunteer firefighter for over 30 years.

The Town Council voted in 2003 to allow Bell to plant the tree in the park. She also installed a memorial at the base of the tree that read: "In loving memory of Walt Record. 1946-2003. You will be missed."

After the original tree honoring Record was cut down, Bell removed the memorial, but she plans to install it at the foot of the new tree.

In November, suspecting he had a hand in the original tree's removal, the Alpena Town Council asked Theron McCammond to resign.

McCammond, who had served since January 2019 as mayor, admitted no culpability in the tree cutting and refused to resign.

Citing several issues, a petition drive ensued to recall him from office, but then, last month, it was discovered that McCammond's house wasn't within the Alpena city limits. He wasn't qualified to serve as mayor.

The council voted unanimously for Alderman A.J. Womack to serve the remainder of McCammond's term as mayor.

So during Monday's meeting, the council approved hiring two new part-time police officers and replacing one who is leaving.

Ostensibly, McCammond had a problem with the original Record memorial tree because it blocked a new light installed at the park. If the new tree grows to the point that it's blocking the light, said Womack, the limbs will be trimmed.