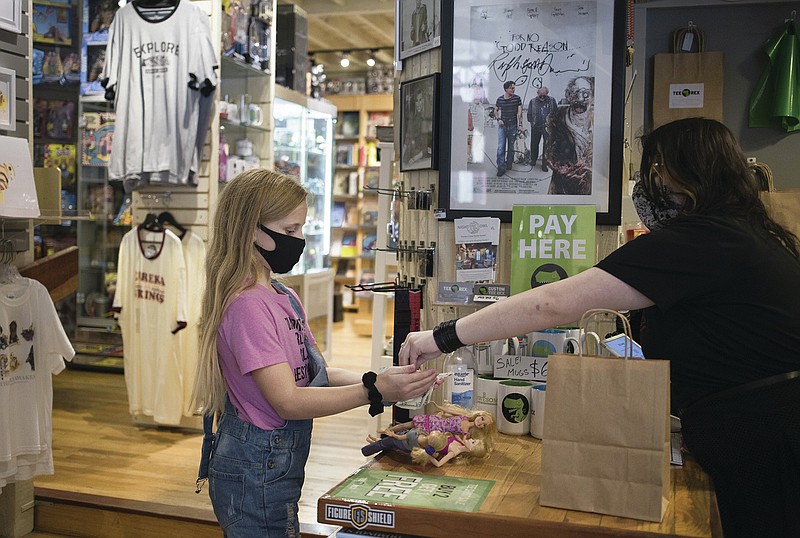 Priesley Willard, 9, of Fortville, Ind. (from left) buys dolls from Belanna Powell, Thursday, September 3, 2020 at Eureka Clothing Co. in Eureka Springs. Retail sales are booming in Eureka Springs. For the month of June, sales tax collections were up 4.7 percent when compared to June 2019. Check out nwaonline.com/200904Daily/ for today's photo gallery. (NWA Democrat-Gazette/Charlie Kaijo)

EUREKA SPRINGS -- With outstretched arms, the seven-story statue of Jesus that overlooks this tourist town sayeth, "Bring me your cooped-up, your hunkered-down, those in need of retail therapy."

Throughout the summer, people from across the Midwest have heeded the call. They've come to Eureka Springs and thronged the shops along Spring Street, spending money that might have gone for airfare in a pre-pandemic world.

Vance Marvin, who runs Lazy One lounge wear and pajama shop, said he has encountered folks from as far away as Michigan and Minnesota.

"They're tired of being cooped up to be honest, and they need pajamas," said Marvin.

Tourists have come in such numbers that Eureka Springs saw a 4.27% increase in its city sales-tax collections for June, when compared with June 2019.

He attributes it to Eureka Springs being, well, outdoors.

"We just got blessed by being an outdoor city," the mayor said. "We're the original outdoor shopping center."

Berry was referring to the doglegged Spring Street, where people can exercise social distancing on the sidewalk between boutiques and unique food establishments like Eureka's Nut House, where customers get a paper bag with the words "This is my nut sack" on the side.

Eureka Springs brought in $223,862 in June through its 2% city sales tax. The city gets the tax totals from the state about two months after the taxes were collected by local businesses.

"We are the only city in the state that relies 100% on tourism."

But still, the tourists are coming.

"I think the majority of people are coming because they can relax," Berry said. "They can sit in the park and people watch without having to be shoulder to shoulder with people."

Laci Moffitt, who owns Eureka Clothing Co., said her sales increased by 28% in August, when compared with August 2019. She had a similar increase in July.

She said shoppers have been coming from a 300-mile radius, about a four-hour drive. Many have been from Oklahoma and Missouri.

"We are so blessed," said Moffitt. "It was such an unexpected surprise. Hearing all across the nation about businesses closing and all the hardship everyone is having, and then little ol' Eureka here, we're just chugging along.

"When we closed in March, we were all scared and didn't know what to expect."

Moffitt reopened the store April 29. She extended hours. Instead of closing at 6 p.m., she sometimes stays open until 9 or 10 p.m.

Much of her business now is from shoppers coming in after 5 p.m.

"It has been a very interesting trend that we have been seeing," she said. "You just have to be open and you have to be welcoming. In this day and age you have to make it more of an experience instead of just a store selling clothes."

She has started selling some outdoor and fishing apparel.

"We make it a point to talk to all our customers," she said. "I can't tell you how many people said we were supposed to go to Italy but that got canceled so we came to Eureka."

"Being closed for March and April set us back some, but over the summer months, compared to last year, they're way up," she said.

Michelle Simpson and Steven Ingram, both of Tulsa, were shopping Thursday at Tee Rex, a T-shirt and toy store on Spring Street. It's the second year in a row they've come to Eureka Springs on vacation in September.

"We've been here since Sunday, and we've found something to do every day," said Simpson. "We went through some caverns and went on a couple of hikes. Now today is shopping day."

Simpson said she appreciated the fact that many people in Eureka Springs were wearing face masks.

"I feel like they're handling it better than Tulsa is, a lot better," she said. "People here just kind of go with it."

The commission's sales tax collections for April plummeted 83% from the previous April. But many businesses were shut down in April because of the pandemic. When they were allowed to reopen, things improved quickly. Eureka Springs' A&P tax collections for July were down 19% from July 2019.

"We adjusted our budget down by $500,000 but we are not going to be down near that much," said Rick Bright, finance director for the commission.

The commission's tax collections on lodging were down 92% in April. But by July, they were down only 8%, when compared with those months in 2019.

The commission's tax collections at Eureka Springs restaurants were down 74% in April and 30% in July, compared with those months in 2019. But there are still statewide restrictions on the capacity of restaurants because of covid-19.