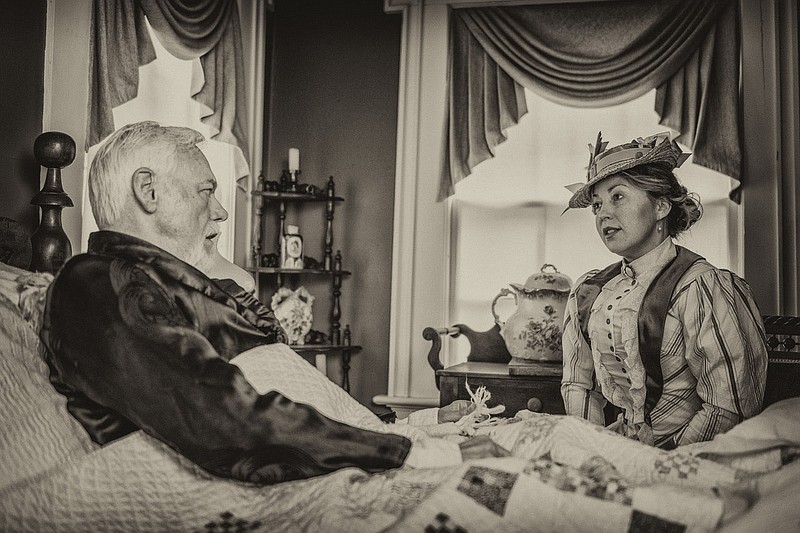 Filmmaker Larry Foley admits that the story of "Indians, Outlaws, Marshals and the Hangin' Judge" has largely been a regional one -- until now. Now he hopes his film by that name will elevate the "real story of Fort Smith [to] be considered up there with Deadwood, Tombstone and Dodge City when telling tales of the Wild West. It's too often forgotten."

Foley's film, which will be released Sept. 10, is the third in a series the film's producer, director and writer -- who is also a professor and chairman of the School of Journalism and Strategic Media at the University of Arkansas -- promised himself he would make.

"Several years ago, I wrote down a goal of three films that I wanted to produce," he remembers. "Kind of my own professional documentary bucket list -- Arkansas-based stories that impacted the nation. The first was 'The Buffalo Flows,' the story of our first national river. It aired in prime time on PBS, and I won a Mid-America Emmy for writing. The second, 'The First Boys of Spring,' the story of the birth of spring baseball in Hot Springs, aired nationally on MLB Network and the Fox Sports channels. I won two Emmys for that film -- writing and documentary."

The story of Judge Isaac C. Parker, whose strict rule of law earned him the sobriquet "the hanging judge," captured Foley's attention way back when he was a Cub Scout on a field trip to the old federal courthouse in Fort Smith in the mid-1960s.

"I've done a few previous stories about the subject, but I've always wanted to produce the definitive documentary on Judge Parker and those Wild West days of the late 19th century," he explains. "And I wanted to include the story of American Indians, from their point of view, the role they played, and how they got to what we now know as Oklahoma.

"The story wouldn't leave me alone. So, here it is!"

Appointed by President Ulysses S. Grant, Isaac Charles Parker served as federal judge for the Federal Court of the Western District of Arkansas in Fort Smith from 1875 to 1896. According to the Encyclopedia of Arkansas, his court was unique in the fact that he had jurisdiction over all of Indian Territory, covering more than 74,000 square miles."

Fayetteville actor Bill Rogers says he didn't know much about Parker until he was cast to portray him in Foley's film.

"I knew a few bits and pieces, primarily through a few articles, movies and books like 'True Grit,' and his reputation as the infamous 'Hanging Judge,'" Rogers says. "I learned that he served 21 years, presided over almost 13,500 cases, sentenced 160 to death -- of which around 80 or so were executed.

"Judge Parker was a fascinating man of many layers and, in my opinion, a good man who had a most difficult job."

"Judge Parker is a complicated, complex and at times, contradictory personality," Foley appends. "The city was so sick of his sordid fame as the hanging judge that the mayor ordered the gallows burned down following his death. But that wasn't the end of the story. Last fall, Fort Smith dedicated a statue in his honor, celebrating Judge Parker, the community citizen.

"The stories of Indian removal that resulted in the federal court, the outlaws and the marshals -- they are all remarkably American," Foley adds. "You always start with a good story, and I knew we had that -- a treasure chest full of them."

So Foley undertook his research "with what we academics call the 'literature' review."

"I read every book, newspaper article and story I could get my hands on," he recalls. "I poured through documents and web pages and archives. I scoured for old photographs and films. When I came across the St. Louis Republic story from Sept. 6, 1896, written by Ada Patterson, I thought, 'This might be the hook.' I found the entire story archived at the Museum of Missouri History in St. Louis; the museum sent the microfilm to the UA Library; and when reading it, I instantly knew, 'Yes! This is it!'"

Patterson, says Foley, was a 29-year-old reporter "known for covering sensational stories." During her visit to Fort Smith, she interviewed Parker's hangman, George Maledon, a jailer, a guard "and other characters that must have been hanging around the courthouse when she was in town," he says.

"I decided to tell the story in first person, beginning with a reenactment of Ada Patterson interviewing the infamous judge," Foley explains. "Both Parker and Patterson were gripping story tellers. It's not by accident that I decided Ada Patterson should narrate the story in first person, using her own words, much like the fictional Mattie Ross narrates the novel -- and films -- 'True Grit.'"

Foley sought out California actress Jennica Schwartzman, who has appeared in Arkansas-made films "Gordon Family Tree," "The Man In The Trunk" and "Parker's Anchor," to portray Patterson.

"I had the joy and pleasure of reading Ada Patterson's real words," she marvels. "I just can't believe how much history we get to experience with her news story. Reading Ms. Patterson's words, wearing period-accurate clothing, riding the trolley, walking in her footsteps, taking a walking tour she wrote specifically for me over 100 years later -- it was all pretty overwhelming and the richest experience I've ever experienced on a film set. Larry Foley's dedication to historical accuracy as well as his commitment to the artists to bring that journey to life in our own time with his full support -- he really is a treasure of a storyteller."

Rogers, too, was able to speak his character's own words from Patterson's story, portraying Parker from his bed, where he was dying from kidney disease.

"Every single line I say in the film came directly from Judge Parker," he says. "Jennica is the perfect Ada Patterson, and playing opposite her made the scene come alive. It was like Ada and the judge were just having a conversation, and I believe that added to the realism of the film."

"Knowing that we were going to frame the story around that 1896 newspaper interview meant that hiring the perfect Judge Parker and Ada Patterson would be critical," Foley says. "Bill Rogers is perfect as Parker. He grew a white beard for the role and nailed his lines to the point where you begin to think this is the real Judge Parker on camera. Jennica Schwartzman delivers a wonderful performance as Ada, both on camera and in her perfectly toned narration."

While Parker and Patterson are the film's pivotal characters, they are just part of the story. Foley also talks with modern-day spokesmen for the other constituents of his title, among them UA law professor Stacy Leeds, a citizen of the Cherokee Nation; historians Charles Robinson and Elliott West of the UA; and Tom Wing and Daniel Maher of the University of Arkansas at Fort Smith. He was also assisted by Dale Carpenter, his filmmaking partner of more than 40 years, as the film's editor; Hayot Tuychiev, who worked with Foley on films like "The Art of Crystal Bridges" and "Up Among the Hills," as director of photography; and Ed Eaves, who spent three decades as editor at NBC and ABC News, as associate producer and director of reenactments. Music was provided by Harrison Americana group National Park Radio.

"And there are so many more who helped us along the way, as voices, production assistants, photographers and animators," Foley says. "Having T.J. Holmes of ABC's 'Good Morning America' -- my former student -- introduce the film gives it credibility as a true story, based on actual accounts."

Then came the hitch in the project -- the coronavirus.

"We had hoped to release the film in May, but the pandemic shut everything down. Finally, over the summer, I just decided, let's figure out how to get this thing out there," Foley says. "That's when we came up with the idea to have a small, scaled-down premiere in Fort Smith, invitation only, with everyone wearing masks, and stream the event on Facebook. I've not done an event like this before, but it's been exciting to break new ground, showcasing the documentary to a wider audience.

"We hope to announce a broadcast distribution/streaming plan later this year." 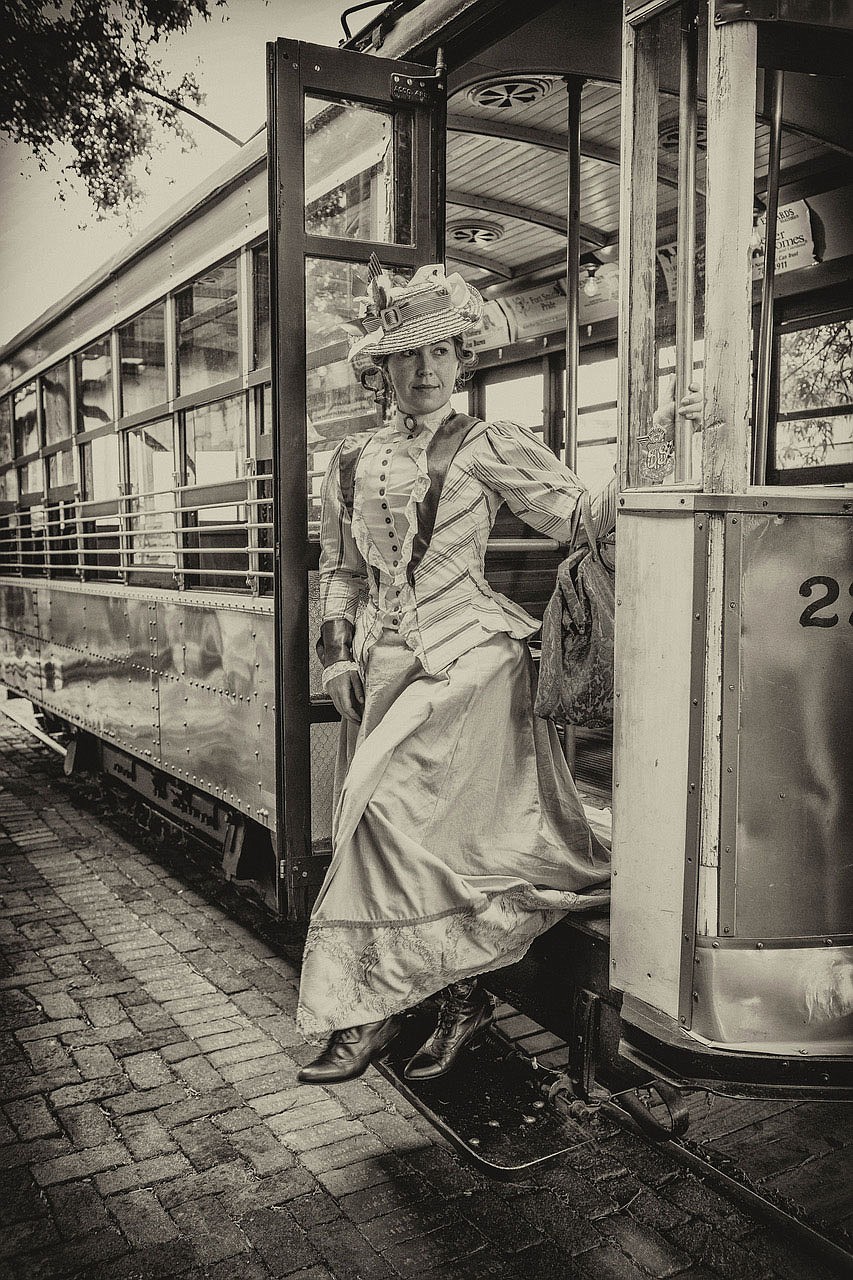 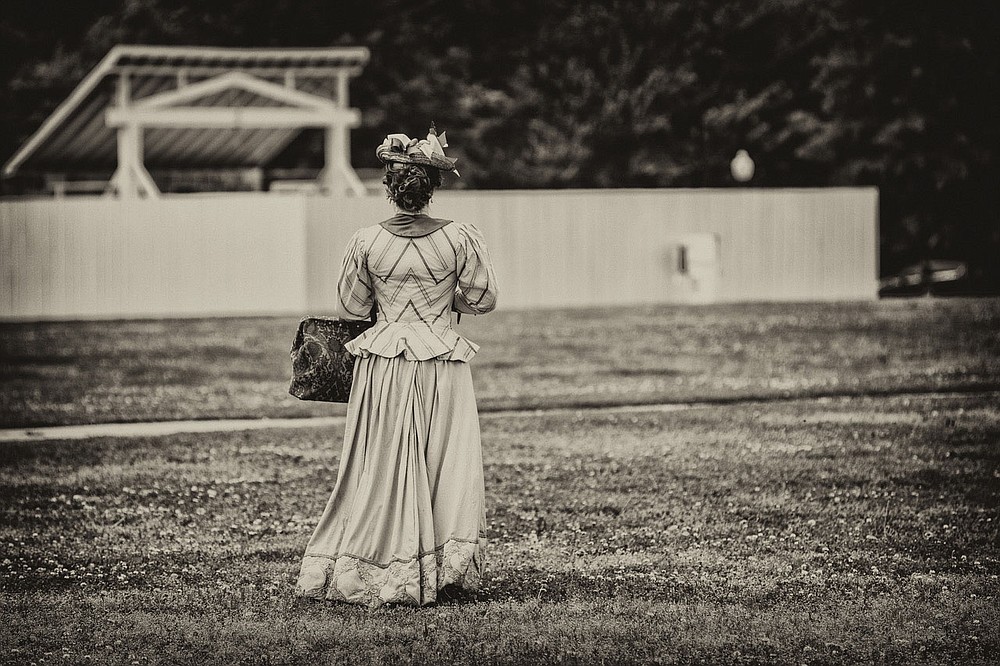 Ada Patterson walks away from her interview with Judge Parker in "Indians, Outlaws, Marshals and the Hangin’ Judge." (Courtesy Photo/James Brewer) 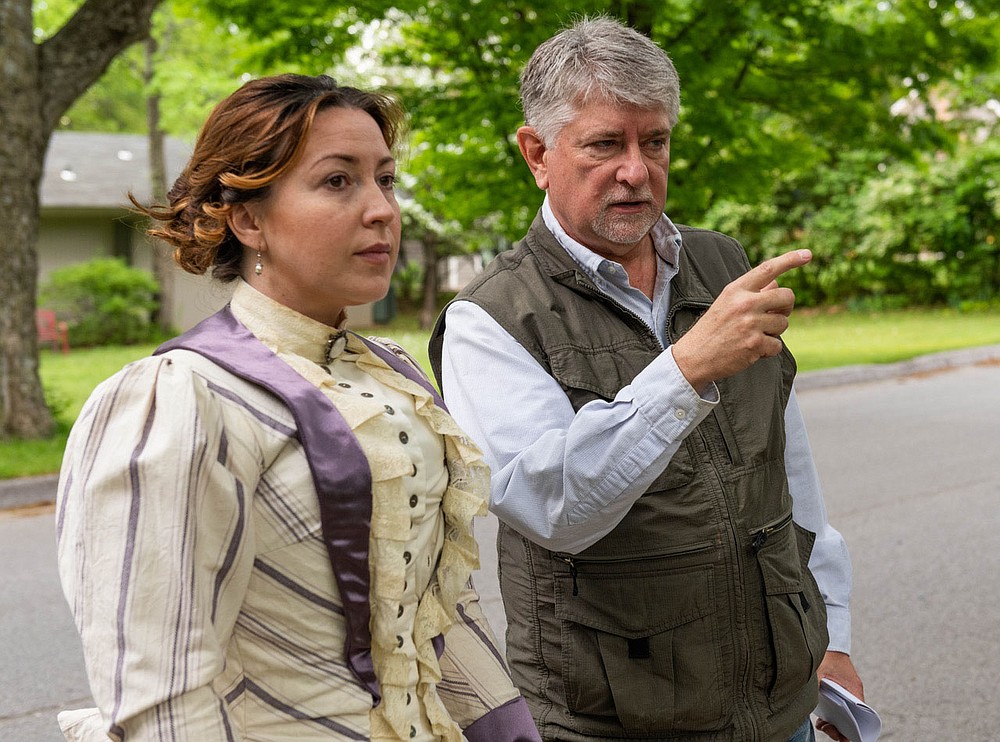 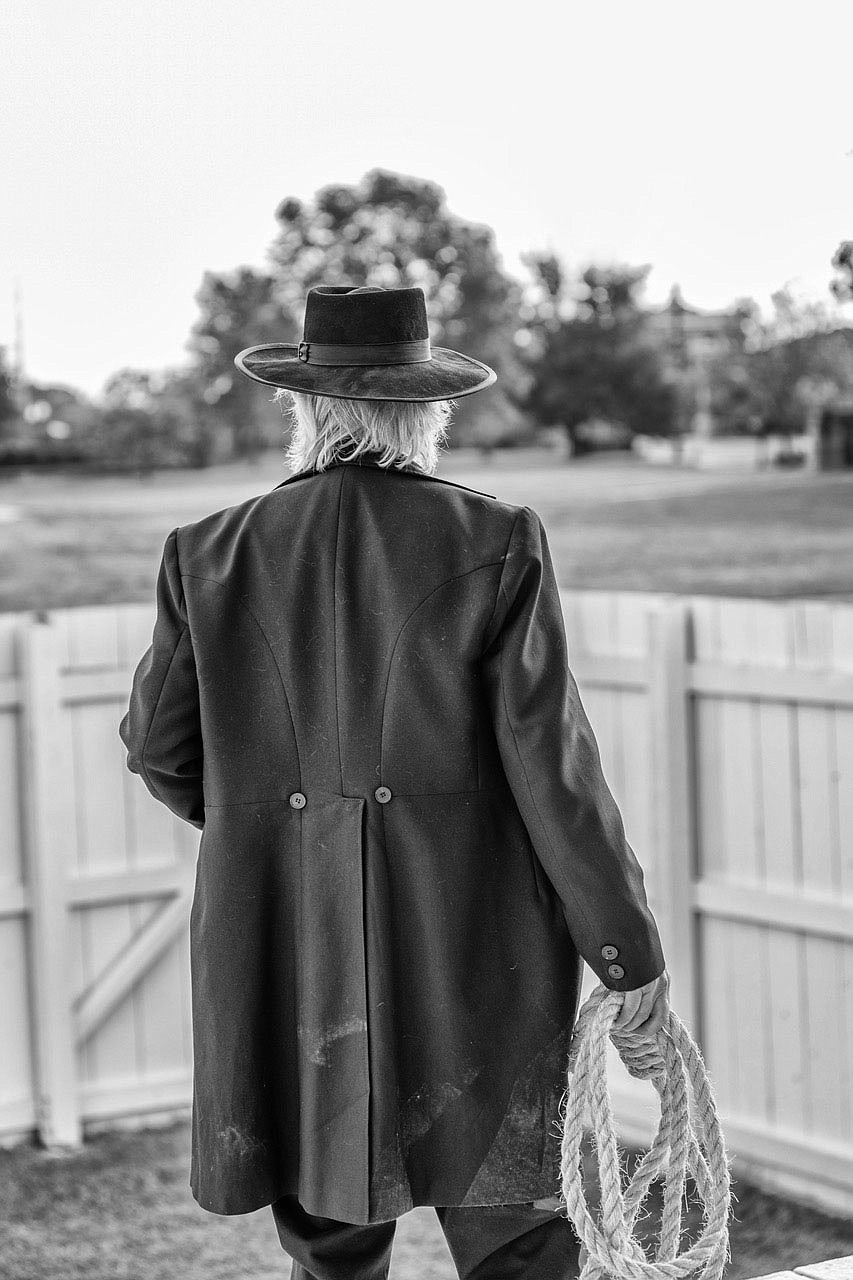 As infamous as Judge Isaac C. Parker was his hangman. Larry Foley's new film, "Indians, Outlaws, Marshals and the Hangin’ Judge," considers Parker and the "Wild West" where his word was law. (Courtesy Photo/James Brewer) 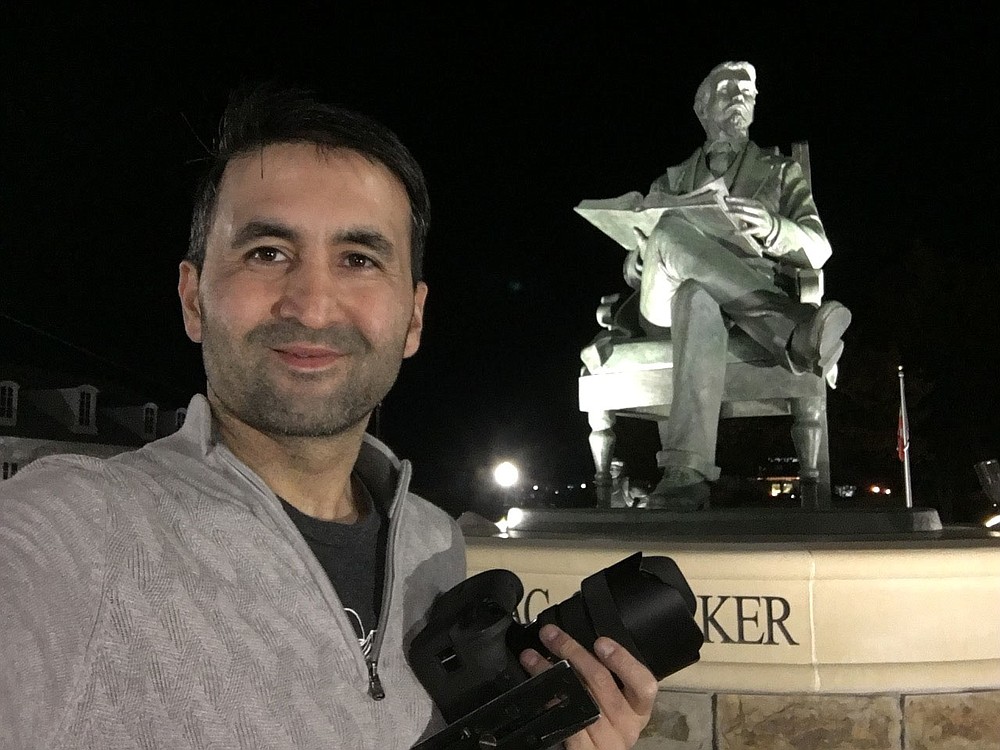 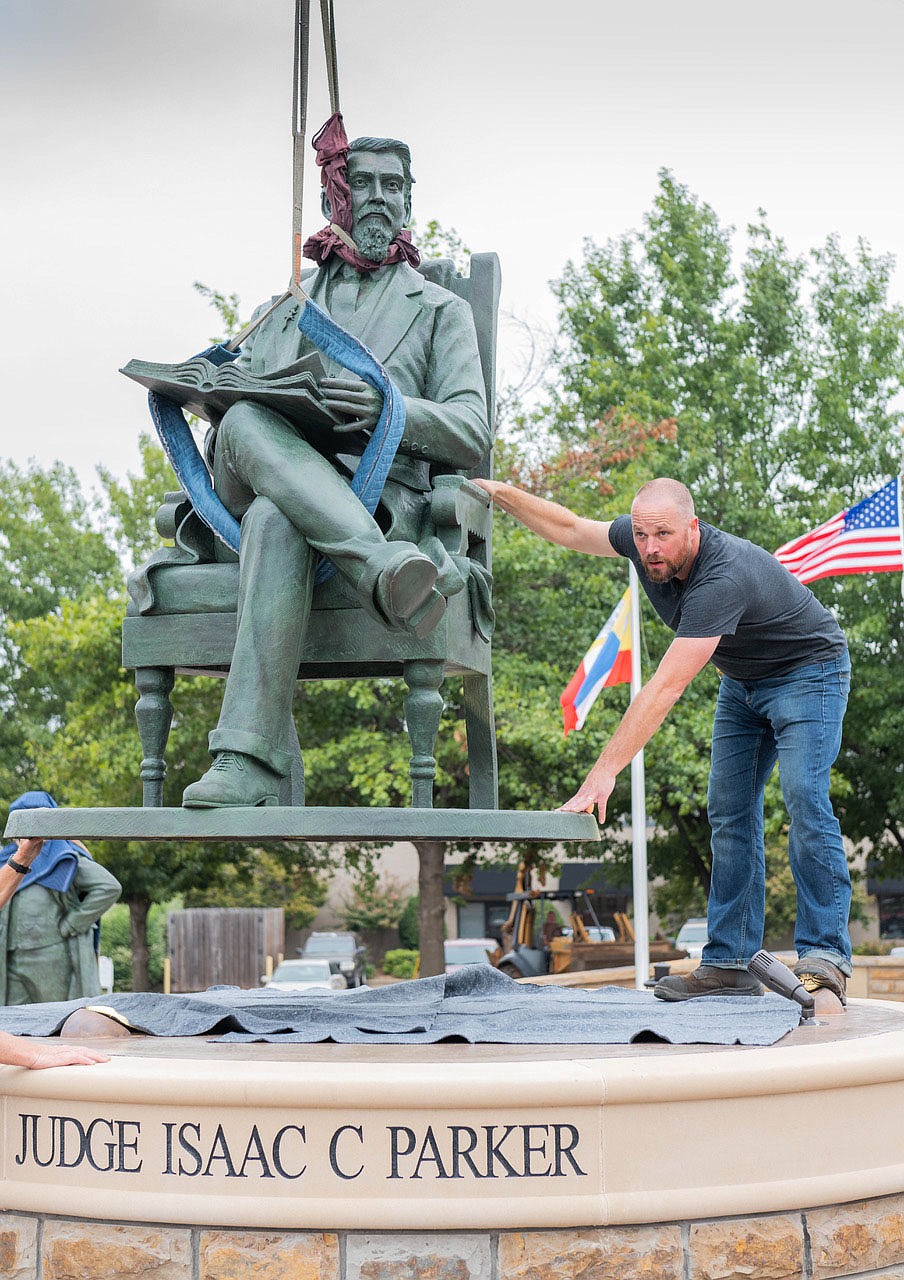 "The city was so sick of his sordid fame as the hanging judge that the mayor ordered the gallows burned down following his death," filmmaker Larry Foley says of Judge Isaac Parker. "But that wasn’t the end of the story. Last fall, Fort Smith dedicated a statue in his honor, celebrating Judge Parker, the community citizen." (Courtesy Photo/James Brewer) 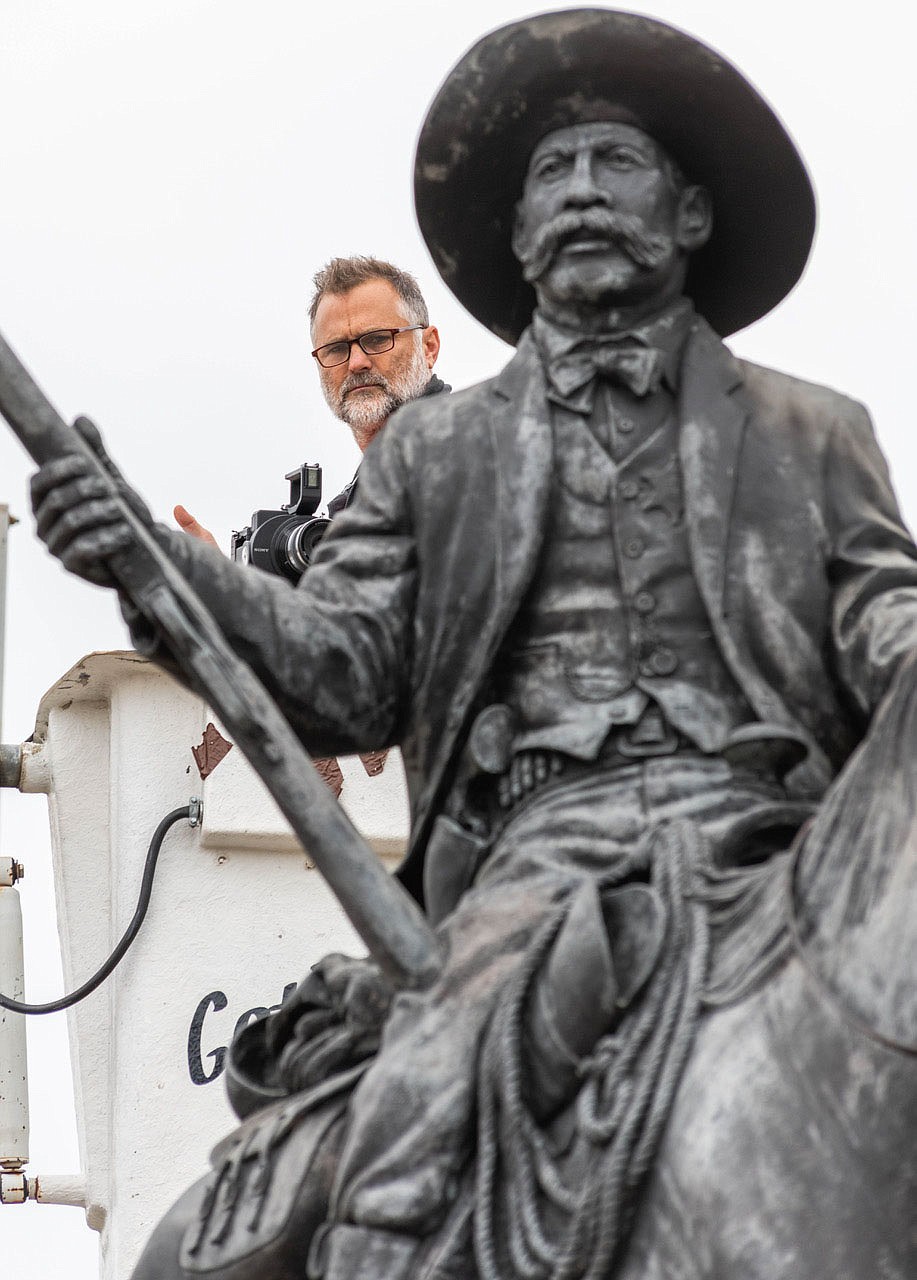 Foley says he "dispatched a film crew to shoot the dedication of the Bass Reeves statue in Fort Smith in 2012, hoping to someday include those scenes in what turned out to be this film. I include clips from a 1986 piece I did for AETN. I’ve been joking that I’ve been at this for so long, I’m now serving as my own archive!" (Courtesy Photo/James Brewer) 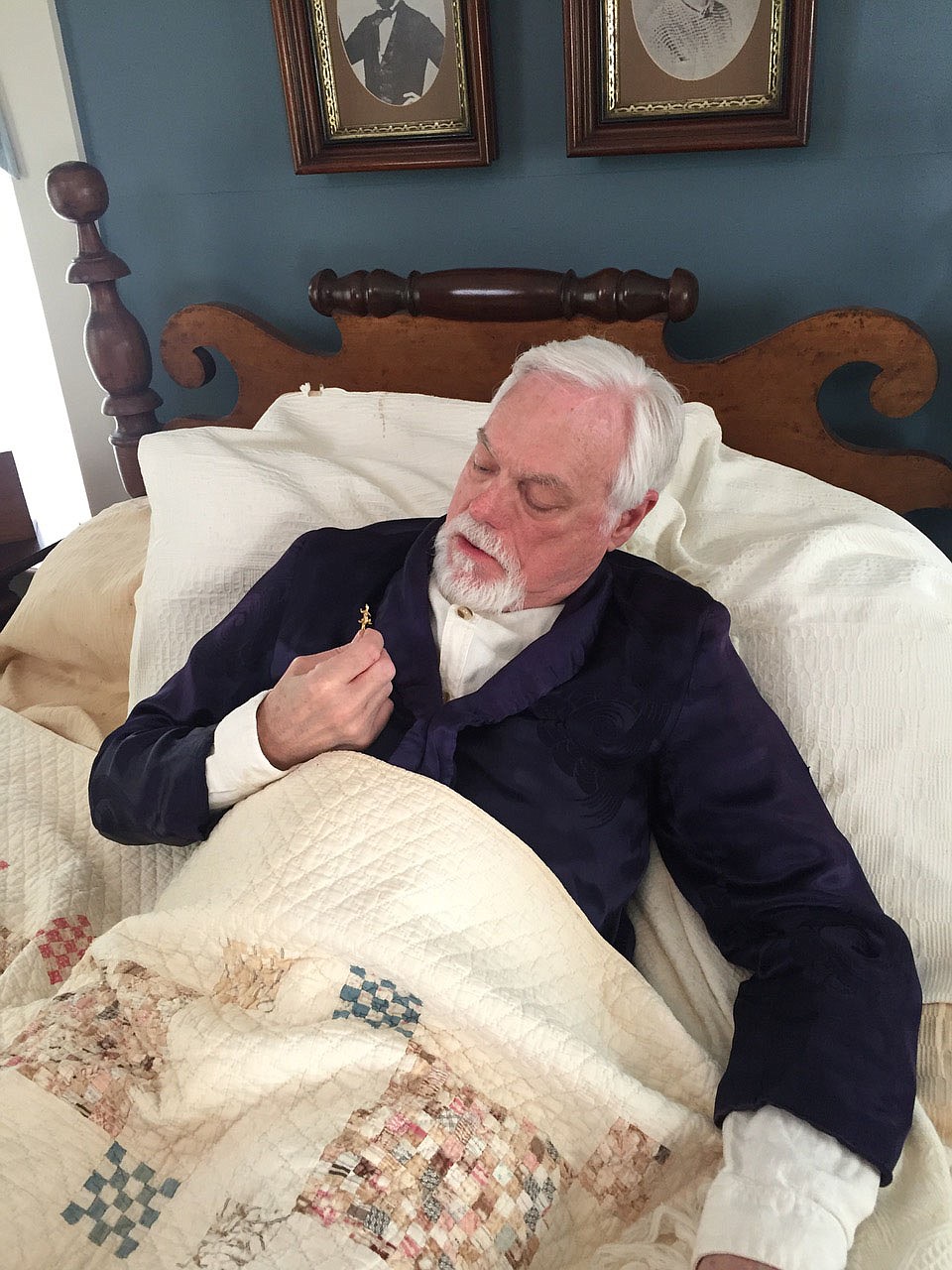 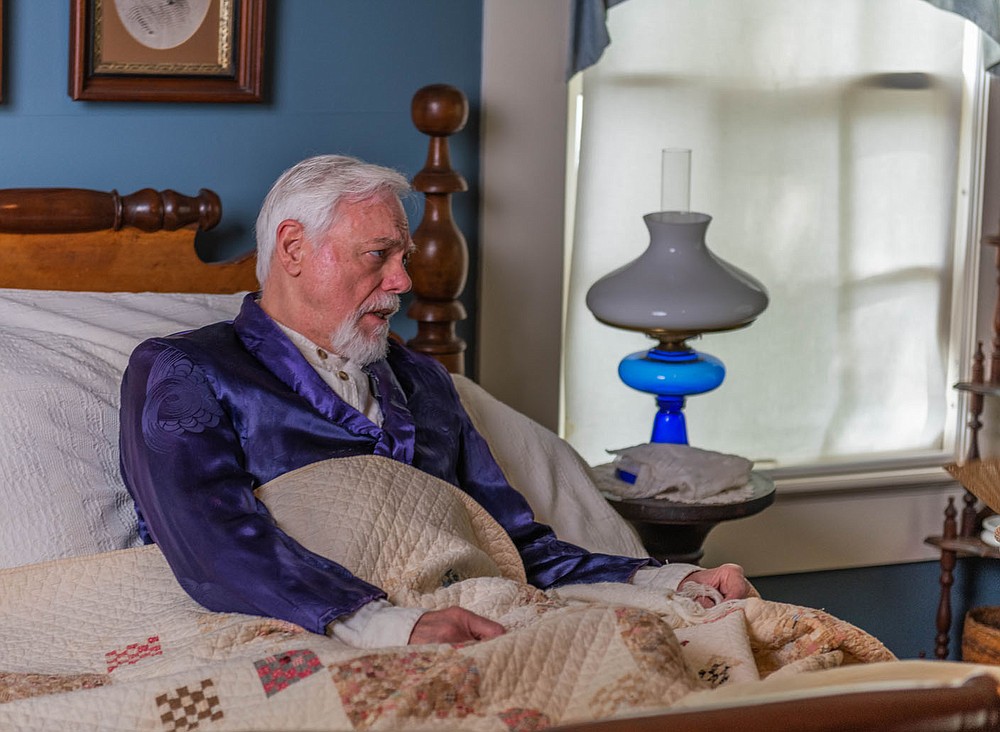 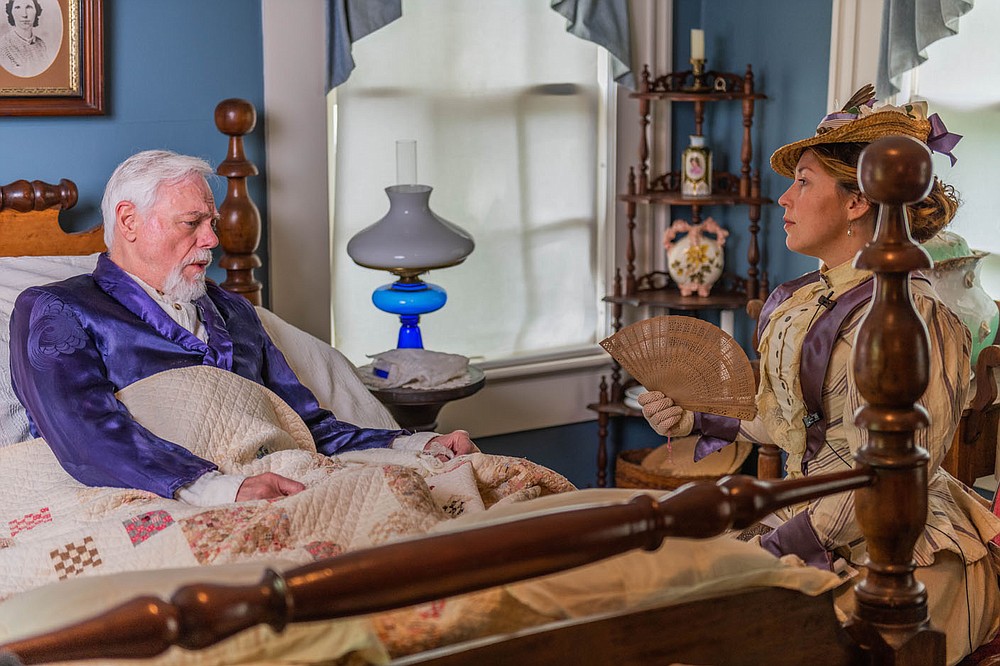 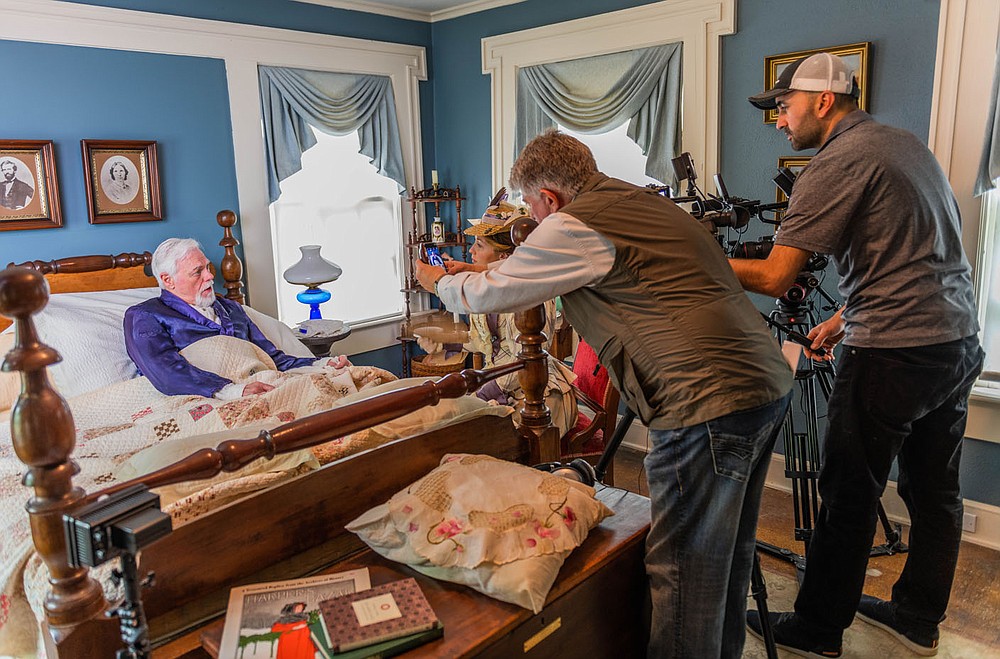