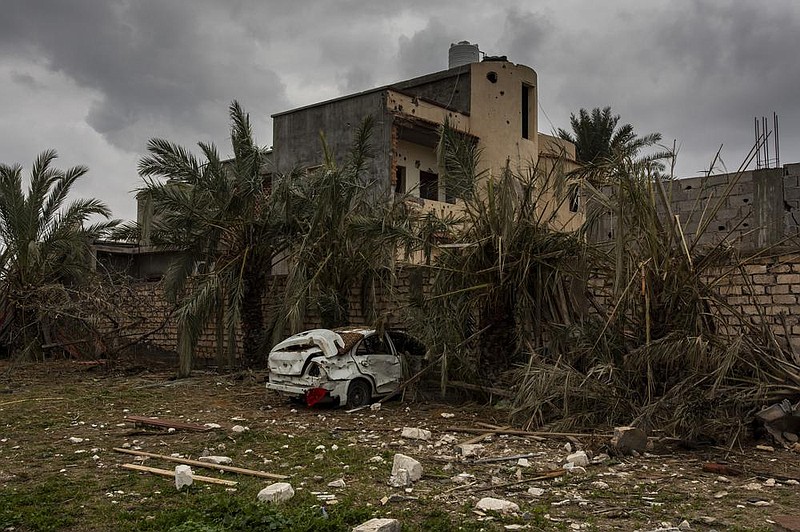 This photo shows damage from a January bomb attack in Tripoli, Libya, by Khalifa Hafter’s forces. A confidential report sent to the U.N. Security Council details extensive breaches of the international arms embargo on Libya by eight countries since the beginning of the year. (The New York Times/Ivor Prickett)

CAIRO -- As war raged in Libya last winter, a dozen world leaders gathered in Berlin to talk peace. The contradictions surrounding the conference were no secret: Many of the global leaders who pledged to end foreign meddling in Libya's conflict were themselves fueling it.

Even so, few expected the hypocrisy would be so flagrant.

As leaders posed for a group photo with Chancellor Angela Merkel of Germany on Jan. 19, having signed a pledge to respect the arms embargo on Libya, at least five cargo airplanes filled with weapons from the United Arab Emirates and Russia were cruising across the skies of North Africa, bound for the battlefields of Libya.

Details of the secret, embargo-busting flights are contained in a confidential report to be presented to a panel of the U.N. Security Council on Friday. Such breaches are nothing new in Libya, where even U.N. officials call the embargo a "joke." But the sheer scale of violations so far this year, combined with the volume of advanced weaponry now circulating inside the country, are a cause of growing international alarm.

Using flight data, ship records and other tools, investigators show that egregious violations by leaders who flout the embargo with seeming abandon have reached new levels.

Four of the cargo planes bound for Libya on Jan. 19 had been sent by the United Arab Emirates, whose leader, Crown Prince Mohammed bin Zayed, smiled as he lunched with Merkel in a luminous room just before the peace conference. Along with Russia and Egypt, the UAE is backing Libyan commander Khalifa Hifter in the war.

The fifth plane that day belonged to Russia -- one of nearly 350 Russian military supply flights in nine months that have swelled its force of Russian and Syrian mercenaries to over 5,000 fighters, according to the latest U.S. estimates.

The U.N. report, which was seen by The New York Times and confirmed in interviews with officials, comes at a time of intense political instability in Libya, prompting fresh warnings that the country could plunge into a new, even more destructive round of battle.

"Libya is indeed at a decisive turning point," the acting U.N. envoy to Libya, Stephanie Williams, warned the Security Council in a briefing Wednesday.

Libya descended into chaos in 2011 after the ouster and killing of longtime dictator Moammar Gadhafi. Since then it has been divided between two administrations, in the east and west of the country, backed by rival foreign powers.

A 14-month campaign by Hifter to capture Tripoli ended in failure in June but drew Russia and Turkey more deeply into the war. With oil production halted, the bedraggled economy has sunk further, and living conditions are deteriorating rapidly for Libyans who have endured long electricity cuts in the summer heat.

Much of what comes next, though, may be determined by the war's foreign sponsors who, according to the U.N. investigators, have transformed the conflict into a vast proxy war, one cargo plane at a time.

The recent escalation started in January when Turkey intervened forcefully, sending drones, air defense systems and thousands of Syrian mercenaries to back the besieged Tripoli government.

Russia, the United Arab Emirates and Egypt responded by flooding military aid to Hifter's forces, in what quickly turned into a giant, undeclared military airlift.

Investigators counted 339 Russian military flights between Nov. 1 and July 31, mostly from Hmeimim air base in Syria, with a potential volume of up to 17,200 tons. The flights supported mercenaries employed by the Wagner Group, a Kremlin-linked private military company that has become a crucial element in Hifter's forces.

President Vladimir Putin of Russia has repeatedly denied any Russian intervention in Libya.

But the Russian airlift has intensified through the year, from eight flights in December to 75 in July, even after the collapse of Hifter's Tripoli campaign in June -- a sign, according to several Western officials, of Russia's growing stake in the conflict.

As fighting gave way to a stalemate centered on Surt in recent months, Russian mercenaries have moved into position around several of Libya's biggest oil fields.

The report also focuses on the United Arab Emirates, which sent a further 35 military cargo flights to Libya in the 11 days after the Berlin conference in January, and another 100 or so in the first half of the year, many of them using three charter airlines registered in Kazakhstan.

Many of those aircraft turned off their transponders -- tracking devices that identify their positions -- as they entered Egyptian or Libyan airspace. But efforts to disguise the military supply flights were largely cursory.

Some of the flight manifests carried suspiciously vague descriptions of their cargo, claiming to be carrying frozen food, men's suits or a consignment of 800 boilers, investigators said. Others were filled out in the name of the 4th aviation group of the UAE armed forces.

Three of those airlines stopped flying in May when Kazakh authorities suspended their licenses after receiving international complaints. The UAE military stepped up to fill the gap, using its U.S.-built C-17 Globemaster cargo planes to "maintain the airbridge," running 60 direct flights up to July 31, the report says.

Since September 2019, the UAs also has been recruiting Sudanese mercenaries to fight under Hifter in dubious circumstances. Investigators found that recruits had been hired to do private security work by a firm named Black Shield, then forced into military training and sent to fight in Yemen or Libya.

"These individuals were hired under false pretenses and forced into military training camps," the report said.

The UAE government failed to respond to several letters from the investigators seeking information or comment about its activities in Libya.

On the other side of the war, the report also accuses Turkey of extensive embargo violations. In early June, three attempts by European Union naval vessels to interdict a Turkish cargo ship bound for Libya were rebuffed by Turkish warships. Turkey claimed the cargo ship was carrying "humanitarian aid."

"It is almost impossible to book a seat on any of these flights," the report notes. "The flights are not for fare-paying passengers."

The report also notes the return of Qatar to the war. U.S. officials say that Qatar largely stopped funding Islamist groups in Libya during the Obama administration, under pressure from the United States.

But in May and June at least five Qatar air force cargo flights landed in Libya, the report notes. More recently, Qatar's defense minister visited Tripoli alongside his Turkish counterpart in a pointed show of solidarity.

In an interview, a senior Western diplomat confirmed that Qatar has resumed funding to the Tripoli government.

Libyan civilians have particularly suffered in the intensity and confusion of a sprawling proxy war.

U.N. investigators have evidence that a UAE warplane carried out an airstrike against a refugee center in Tripoli that killed at least 42 people in July 2019, mostly migrants.

Human-rights groups and the U.S. military accuse Russian mercenaries of planting land mines and booby traps as they retreated from the Tripoli suburbs in June. The bombs have killed at least 61 people and wounded 113, Williams, the U.N. envoy, said Wednesday.

A Kremlin spokesman dismissed the U.S. accusations as "crazy talk."