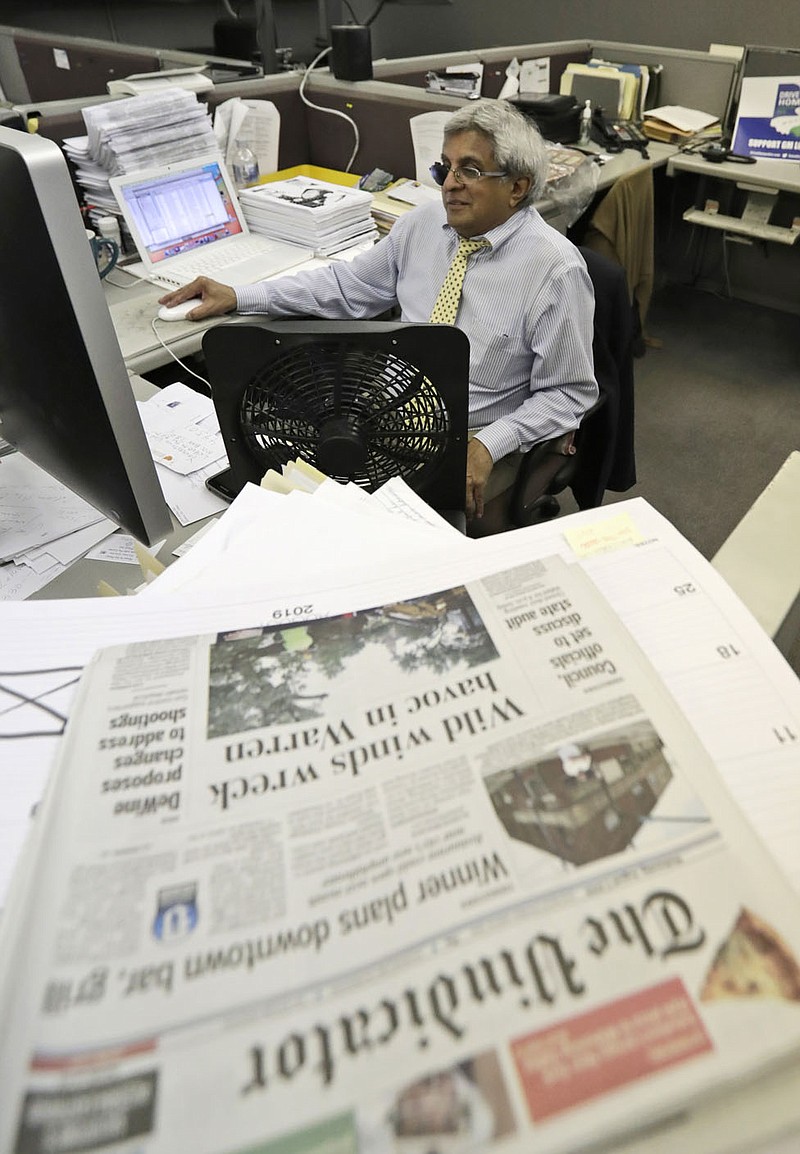 FILE - In this Aug. 7, 2019, file photo, Bertram de Souza works on a story for The Vindicator newspaper in Youngstown, Ohio. The Vindicator, a 150-year-old paper that shut down last year because of financial struggles, is being celebrated in a new book on the anniversary of its final edition. "No Holds Barred" collects hundreds of columns by de Souza, the paper's long-time political columnist. It also features multiple historic photos and reminiscences by former writers and editors at the paper, whose closing, one of the biggest U.S. papers to disappear to date, left a hole in northeastern Ohio media coverage. (AP Photo/Tony Dejak, File)

The Vindicator in Youngstown, Ohio, a 150-year-old paper that shut down last year because of financial struggles, is being celebrated in a new book on the anniversary of its final edition.

"No Holds Barred" includes hundreds of columns by the paper's long-time columnist, Bertram de Souza, multiple historic photos, and reminiscences by former writers and editors at the paper, whose closing -- one of the biggest U.S. papers to disappear to date -- left a hole in northeastern Ohio media coverage.

The hard-charging columns by de Souza often elicited angry -- and unprintable -- letters to the editor and web comments. One reader was so furious they used an ice cream store's sign to direct a public expletive at him in the mid-2000s.

Taking it all in stride was de Souza, 70, a native of Uganda who earned a journalism degree at Kansas State University, worked for the Selma (Alabama) Times Journal and earned a political science master's at Marquette University before arriving in Youngstown in 1979.

He said the book celebrates the support that reporters received from the family-owned paper, no matter how rocky the going got. With the help of former colleagues, de Souza winnowed about 1,600 columns down to about 300 that appear in the book.

"The columns reflect the commitment of this family to really watchdog journalism, to trail-blazing journalism," de Souza said. "They gave me free rein to write whatever I wanted to write."

Vindicator publisher Betty Brown Jagnow and her son, Mark Brown, the general manager, announced in June 2019 that The Vindicator would cease publication because of financial losses. It shut down for good on Aug. 31, 2019.

The paper's support for journalism for the public good dates to the 1920s and 1930s, when The Vindicator railed against attempts by the Ku Klux Klan to establish a foothold in the Mahoning Valley, Brown said in an interview.

The paper "always fought for the common man, always tried to do what was right for the general public," Brown said.

"No Holds Barred" divides de Souza's columns by topic, including the mafia, public corruption, General Motors -- the GM plant in nearby Lordstown finally closed in 2019 -- Youngstown State University and politics.

In a 1998 column, de Souza mocked an apparent mob warning to a county prosecutor to keep his mouth shut, delivered in the form of a dead finch. "It's supposed to be a canary, stupid," de Souza wrote.

In a 2005 piece, as gang violence rocked the city, he suggested sending gang members convicted of gun crimes to Iraq for two years. "That should be enough time for the cretin to either get killed, injured or to find God. Any of the three outcomes would be acceptable."

A 2012 column lambasted bonuses given to 400 Youngstown State employees for student enrollment increases as the worst idea "in the annals of dumb decisions" made on the university's "hallowed grounds."

The book is history told by commentary, said Robert McFerren, the paper's former art director and the book's designer.

"We can't let this just be forgotten," he said. "It needs to be remembered in the long term because it is part of our history and our job of what we did here."

Although the paper died, its name lives on as part of a deal with The Tribune Chronicle in neighboring Trumbull County. The Ogden Newspapers chain bought the name, subscriber list and news website from the family-owned "Vindy" in Youngstown.

Though de Souza's columns reflect the past, their subject matter is evergreen, said the book's editor, Cynthia Rickard, de Souza's ex-wife and a longtime Vindicator reporter and editor. 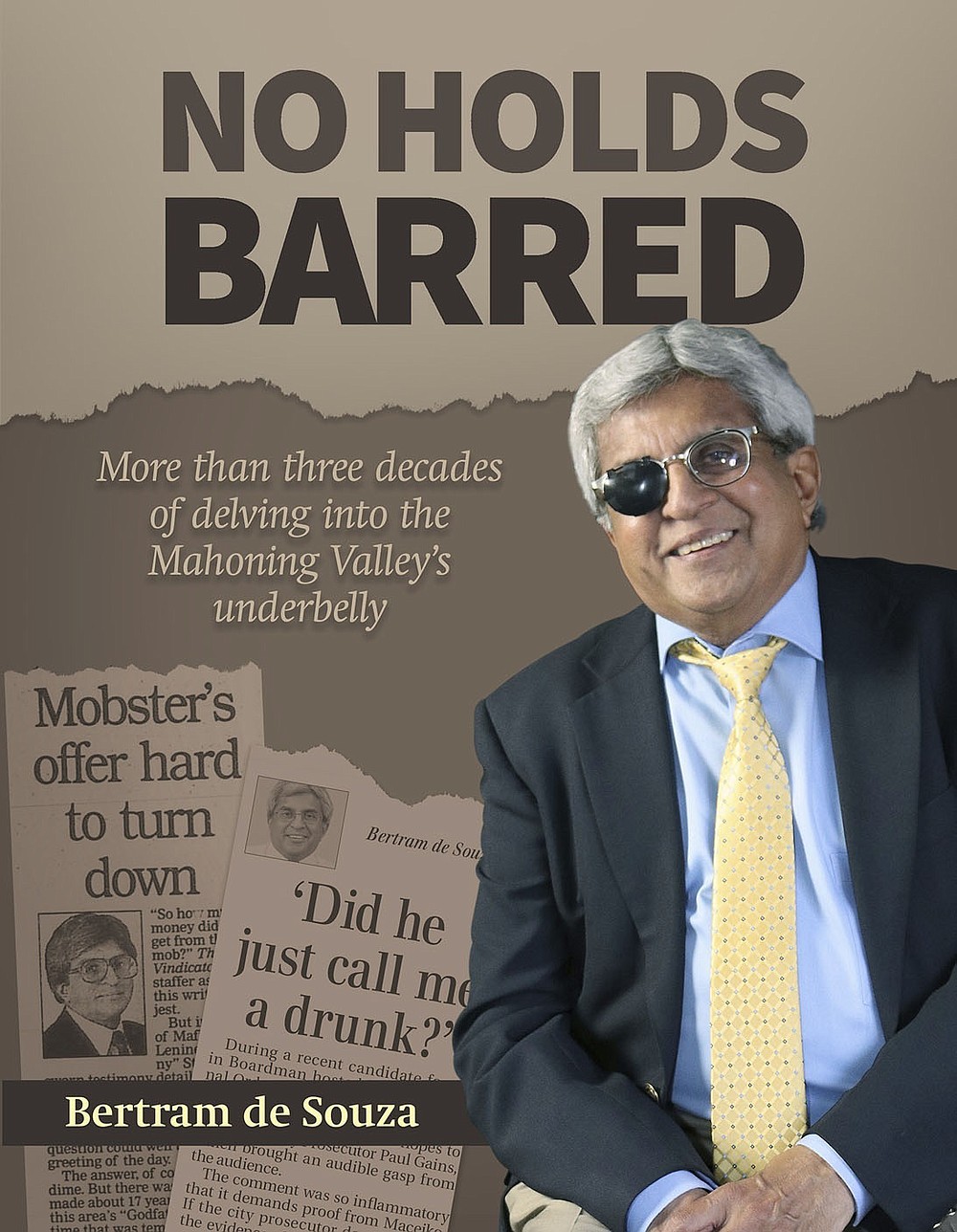 This image released by Scribbler Publishing Group shows the cover of "No Holds Barred." The Vindicator in Youngstown, a 150-year-old paper that shut down last year because of financial struggles, is being celebrated in the new book on the anniversary of its final edition. "No Holds Barred" includes hundreds of columns by the paper's long-time political columnist, Bertram de Souza, and reminiscences by former writers and editors at the paper. ( Scribbler Publishing Group via AP)
More News

“No Holds Barred” is available to order from the author’s Scribbler Publishing Group ($19.99) at ScribblerGroup.com. De Souza has also started a podcast, also available at the website, to go along with the book.