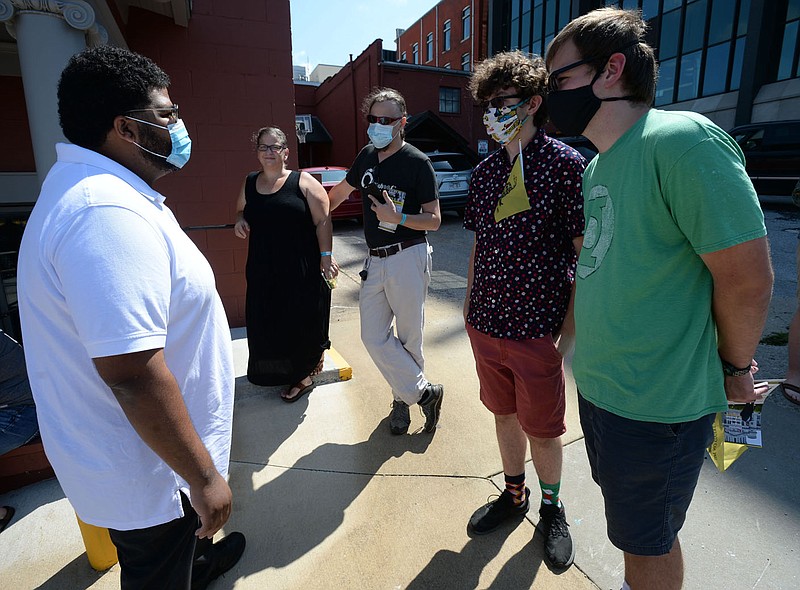 FAYETTEVILLE -- Sen. Tom Cotton's claim the nation has an "under-incarceration problem" in May 2016 is "one of the No. 1 reasons I'm running," Libertarian Party candidate Ricky Harrington Jr. told a crowd in Fayetteville on Saturday.

"I'm a Black man who has seen murderers of Black men escape the punishment of the law and who's seen how inequitable incarceration is," Harrington told a crowd of at least 40 before going out to meet voters at the Fayetteville Farmers' Market on Saturday.

The United States has the highest imprisonment rates in the world and Arkansas has one of the highest incarceration rates in the United States, according to the nonprofit Institute for Crime & Justice Policy Research. Also, the nonprofit Pew Research Center found in a May 6 report that 1,501 Blacks in America are incarcerated per 100,000 of that group's population. This compares to an incarceration rate of 268 per 100,000 for whites.

Cotton made his remark in a speech opposing a bill in Congress. He said in that speech that less than half the nation's violent crimes are ever solved and only a fraction of its property crimes are, leaving the perpetrators of most crimes unpunished.

Harrington spent four and a half years as a prison chaplain at the Cummins Unit, a prison in Arkansas. Part of that time he also worked as a program specialist there. Part of his duties required being with the victim's family in a murder case prior to an execution, then working with the family of the person being executed, he said.

"A lot of things are not as cut and dried as we like to see them," Harrington said in an interview after his speech.

Cotton is a Republican from Dardanelle. He is running for a second term in the Senate. He faces no major party opposition. Democrat Josh Mahony of Fayetteville dropped out hours after the candidate filing deadline closed. Independent candidate Dan Whitfield's efforts to appear on the ballot against Cotton remain waiting for a court decision.

Harrington also cited legislative efforts to pass laws making it more difficult for candidates to appear on the ballot as a major motivation for him to run. The "whole purpose" of elected officials "is to make sure the playing field is fair," he said in his speech. Skewing thing to give themselves an advantage is a violation of trust, he said.

The Benton County and the Washington County Libertarian parties co-hosted Saturday's event, according to the party's announcement. Michael Kalagias, the state party's nominee for the 3rd Congressional District, also spoke. The gathering observed social distancing guidelines such as having attendees wear masks, a precaution against the spread of covid-19.

Calls, a text and an email to Cotton's campaign staff were not returned Saturday.