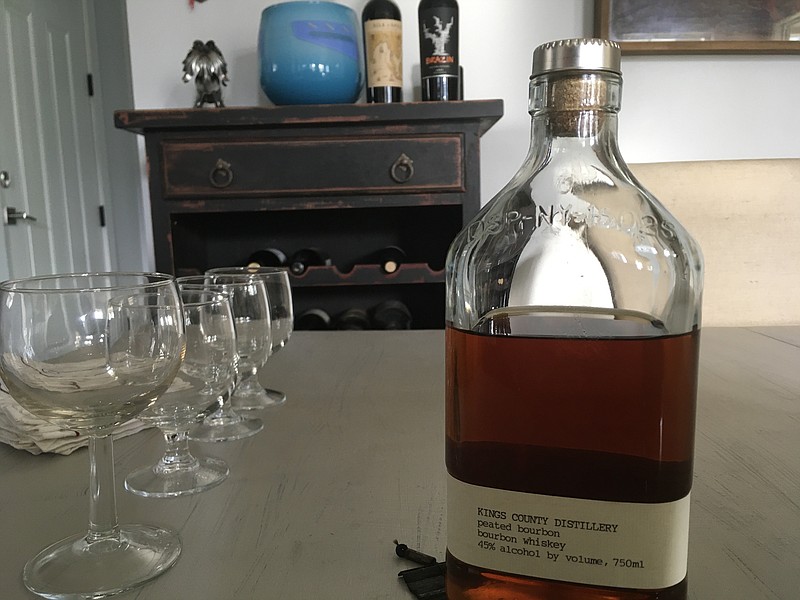 One day, you might realize that most of your relationships are parasocial and that there's no reason that happy hour can't begin at 3 p.m.

Let's not belabor this. It feels good to have a drink, to have your inhibitions lifted, to feel your shield slide to the ground. In normal times, having a drink might feel like an unmasking, a way of transitioning from a more formal presentation of ourselves to something more authentic and open to connection with our fellow humans.

We all know how an individual's body chemistry might interact badly with alcohol, and that some people are not psychologically equipped to stop pursuing what they think they want, but for most of us a drink is just a drink, a little social ritual we occasionally perform. It's something to which we can look forward.

But these days, most of us aren't being very social. While a lot of bars remain closed, as restaurants limp forward at some percentage of their capacity, liquor sales are way up.

Over the first three months of the pandemic, liquor sales were up 27%, according to CNN. Counterpoint: According to Fox News: "While some businesses saw an increase in the sale of alcohol during coronavirus lockdowns, it turns out that Americans have been drinking less during the pandemic. This is likely due to the high volume of alcoholic beverages sold at live events (concerts, sports) or social gatherings ..."

These facts are not mutually exclusive. Just because you buy more liquor doesn't mean you're drinking more liquor. Liquor sold in liquor stores might be stashed away in bomb shelters or root cellars.

In our house we have bottles that have been sitting around for a decade; one of the pandemic self-improvement programs Mr. Drinkies has undertaken is an inventory of wine, with the aim of figuring out which vintages are close to their peak. We need to drink some of those modest bottles that we have stashed away. They are not getting any better.

Meanwhile, if a bartender pours a drink or a concessionaire pulls a beer, we can be fairly certain that alcohol will either be consumed or spilled within the next hour. If the Arkansas Travelers sell no beer in 2020, and gin sales spike 42% over the same period, that probably means people in general are drinking less. But I can't see how we can determine with any degree of certainty that that is so — my guess is that my household is actually consuming less alcohol during lockdown than we would otherwise, for a couple of reasons.

First of all, we have made a decision to be disciplined about it. We don't drink every day, and we don't drink until the sun is over the yardarm. Which is, if you think about it, a pretty lax standard. In the North Atlantic, where the expression originated, the sun would rise above the upper mast spars (yards) of square sailed ships around 11 a.m.

Even our friend, who we'll call Stuart for purposes of this column — and who inspired our practice of keeping a bottle of "Stuart vodka" — modestly priced vodka decanted into a Stolichnaya Cristall bottle buried in the back of our refrigerator just for him — waited until noon to open his bar.

And we're done by 9 p.m. Typically this means a cocktail and a glass of wine or beer with dinner. (We do use rather large wine glasses.) Every other day, on average.

In normal times, this would be supplemented by whatever we'd drink outside the house — wine at gallery openings, drinks at parties, our Tribeca Film Festival routine of hitting the open bar before going out and maybe having a nightcap in the hotel later. We're drinking less, but buying as much, if not more, alcohol.

Part of this stems from boredom.

There aren't a lot of places I go these days. Golf courses, the post office, sometimes to a grocery store. I've bought a pack of guitar strings since the pandemic. Mostly I work and try to get out on my bike for an hour or so.

But I still go to liquor stores. At first I made my order online, and they brought it out to my car when I drove up. The second time, I ordered online and it wasn't quite ready so I went inside and waited for them to bring it to the counter. The third time I ordered online and my order wasn't ready, so I went through the aisles and pulled it myself.

Since then, I've not bothered to order online. I just mask up and go every 10 days or so, not so much to replenish our supplies as to wander the aisles and look at the pretty bottles. All of them have brand stories, little myths about how they came to be and what they stand for. Some are fiction, while some interpolate real history and actual people who lived and maybe even once had some connection to the product on offer.

If you know a bit about the industry, you can enjoy the hype and positioning and see through to the absurdity of the way we sell each other things. Any column about booze that isn't mostly about the advertising is likely to be complicit with the advertising.

That doesn't mean some things aren't better than other things, it's just that individual tastes ought to control. You can find perfectly fine spirits on the middle shelves as well as on the top one. 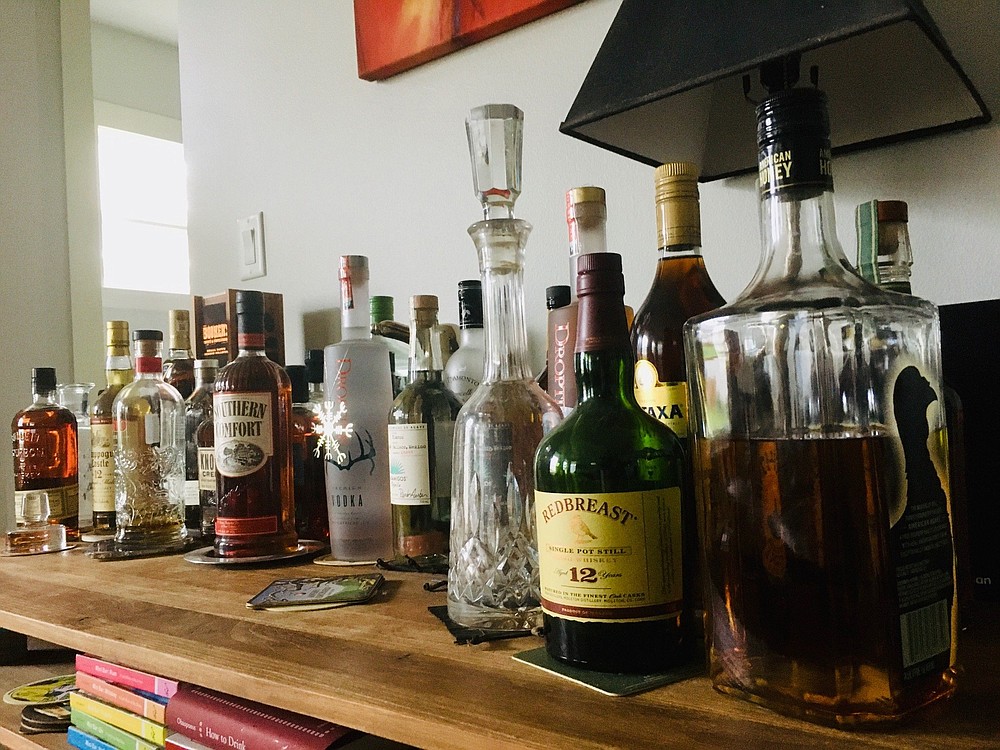 I like to try new things, and so if I'm given a tip about Kings County Distillery's Peated Bourbon (about $60 for a 750 mL bottle, if you can find it) by my friend Paul Bowen who heard about it from Kevin Kerby, then I'm going to want to try it and share it with like-minded people. (Same goes for that illegally produced Missouri peachshine acquired at great risk for a normally law-abiding friend who will for obvious reasons remain nameless.)

I've been meaning to get over to Rock Town Distillery and pick up another bottle of its Arkansas Rye Whiskey (about $45), which is as good as any I've ever had. It wasn't that long ago that most of our liquor stores offered only one or two ryes — usually Old Overholt and Jim Beam. Now, in the stores I habituate, there are usually about a dozen, at varying price points.

But whiskey is fashion, and an old work shirt like Evan Williams will do as good a job as any and even strike a lot of people as more authentic than your designer label. A couple of years ago, this column scientifically ascertained that there's no such thing as bad bourbon (so long as it is real bourbon). Some palates (such as ours) prefer cheaper, fuzzier vodkas to the neutral stuff at the varietal's top end. Taste develops as you accrue knowledge and experience, but being a snob about alcohol is a really boring thing to be.

People drink for all sorts of reasons, and most of those don't have anything to do with epicureanism. Most of those reasons are probably pretty sad. While this column is rarely sober about alcohol — because it's aimed at an audience who like to drink and can do so more or less safely — the plain fact is alcohol is a mild poison that we introduce into our bodies to inoculate ourselves against a coarse and harshening world.

It is a risk to drink.

But we undertake risks every day. It is a risk to socialize, but lately, we've started to receive guests in our home. We put the leaves back in the dining room table to stretch it out to its full length, we prepare separate plates of snacks, we maintain safe distances, and we limit the length of time we are exposed to one another.

Some people might not be comfortable assuming this level of risk and we understand — declined invitations are not cause for grievance. But it seems important, in this time of so much uncertainty, to maintain some real-life contact with other people.

It feels like the greater risk is to submerge deeper, to climb into my bathyscaphe Trieste and sink into the deep trenches within. I don't drink alone but I could, and understand the temptation of self-obliteration and how many of our heroes and neighbors have succumbed to it.

So be careful in there.